With Australian politician Peter Dutton’s recent call to grant white South African farmers “refugee” status, it seems as though the alt-right’s “white genocide” meme is finally starting to seep into the mainstream. Currently, there are two pseudo-documentaries on the subject being produced by far-right activists Lauren Southern and Katie Hopkins.

Bearing that in mind, it’s important to reexamine the role of South African activist Simon Roche in ginning up fears over his country’s farm murders. To hear Roche, a spokesman for the survivalist group Suidlanders, tell it, white farmers are the targets of a coordinated campaign of terror and murder by black South Africans. The end game? Allegedly it’s to drive whites off their lands.

Through cherrypicked statistics from less than reputable sources, Roche has made unverified claims about the rate of farm murders. In one video from 2017, Roche told alt-lite conspiracy theorist Mike Cernovich that “the likelihood of being murdered as a farmer is greater than the likelihood of dying as a soldier…in Iraq or Afghanistan.”

Baseless claims like these were once exclusively trafficked by white supremacists who openly pined for the days of apartheid. Today, however, they’re beginning to take root in the minds of more mainstream conservatives.

At a recent Breitbart News Town Hall, a member of the white supremacist group Identity Evropa asked far-right pundit Ann Coulter about the mainstream media’s “silence” on the matter. In her response Coulter claimed that “we are seeing a genocide there” and recommended her audience “do a Google search” on it.

And in a now deleted tweet, Ryan Fournier of Students for Trump fame urged the UN to “stop the South African Government from slaughtering white citizens!”

Much of this hysteria, which has intensified in light of South Africa’s land reform, can be traced back to Roche and his U.S. tour. Roche spent most of last year trekking across the country, schmoozing with prominent hate groups and begging for donations. In 2017 alone he spoke with:

In addition, Roche was a keynote speaker at the 2017 AmRen Conference hosted by Taylor, who famously wrote after Hurricane Katrina, “Blacks and whites are different. When blacks are left entirely to their own devices, Western civilization — any kind of civilization — disappears.”

His speech was a dire warning to his white nationalist audience of what happens when non-whites become the majority. “It’s beyond anybody’s comprehension what has happened in recent years in the West,” he said somberly. “And we, in South Africa, are the canary in the coalmine of that process.”

He went on to compare the situation of white Americans to that of a sleeping camper being slowly asphyxiated by a python and praise the alt-right and white nationalists:

This process, I say to you in humility and with respect, whether you like what I say to you now or not, is far worse than you know. You think you do, because you are the right wing of the U.S.A. You know and you see and you understand. But you don’t. You really don’t.

It is almost too late. Take my word for it. Because when they show their hand, as they are doing now, it is too late. They are like a python climbing into the sleeping bag of an innocent camper, and the python slithers so smoothly and silkily over the person’s skin that it’s soothing, and somewhere in their pre-conscious, in their dream state, they enjoy it.

And the python continues to slither and wrap, and I promise you because I have watched this movie before and with respect you haven’t, the python only clenches when it’s too late. Your python is clenching now, and I swear to you on everything that is good, it’s just about too late.

Let me tell you how things are, though, when it comes to the other side of the coin. There is a bit of hope. Clearly people, in the U.S.A. particularly but not only, what’s much less well-known is what’s happening in Europe. The echoes of this conference that are happening in Europe, they are tremendous.

That is the U.S.A. in 2017. That is the alt-right. That is the success of this AmRen conference. That is IE [Identity Evropa]. What is happening now is your last chance, take my word for it.

He is slated to give a speech at the 2018 AmRen Conference as well, which will be held later this month.

But trouble has been brewing on the alt-right lately, with several factions feuding with one another. Simon Roche has now been engulfed in just such a feud, after white nationalist author and “Hollow Earth” theorist Jan Lamprecht accused him of pocketing donations and “playing fast and loose” with the facts.

Like Roche, Lamprecht is a white South African who has made appearances on several alt-right shows including The Right Stuff’s Daily Shoah, Southern AF Podcast, and The Paranormies Present. According to Lamprecht, Roche used donations to purchase a house in South Africa (Roche denies this). He also claimed the Suidlanders stirred up unfounded fears of an impending racial conflict after Nelson Mandela’s death in 2013.

In response, Roche made a guest appearance on Christopher Cantwell’s Radical Agenda show in order to defend his reputation. Cantwell has made a career out of violent, racist rhetoric. On one Radical Agenda episode the New Hampshire native expressed sympathy for terrorist Dylann Roof. And on a separate podcast he joked about wanting to “gas the kikes” and “curb-stomp Negroes.”

In seeking to dispel all rumors about himself and the Suidlanders, Roche gave a detailed description of his U.S. tour — and revealed his extensive ties to white supremacist organizations in the process.

He told Cantwell that he “went to the Institute for Historical Review” — a prominent Holocaust denial outfit whose founder once called the “Aryan white races” the “chosen people of God.” And he revealed that, during last year’s AmRen Conference, Identity Evropa (“IE”) founder Nathan Damigo gave Roche $341 — the proceeds from IE’s merchandise sales.

And that’s not all. Roche said he and his fellow Suidlanders received $2,100 from the Neo-Confederate League of the South, $2,200 from American Vanguard, and $40,000 on FreeStartr — an alt-right alternative to Patreon founded by Chuck C. Johnson and Peter Duke. Other FreeStartr “creators” include Jack Posobiec, Theodore “Vox Day” Beale, Roosh Valizadeh, Laura Loomer, and Sam Hyde.

In addition to making money off Holocaust deniers, white supremacists, and other assorted bigots, Roche admitted that he carried on a brief romantic relationship with Vanessa Carlisle. Also known as “Based South African Girl,” Carlisle has made appearances on the Neo-Nazi podcast Radio Wehrwolf alongside host Blake Lucca.

On Facebook, Carlisle has also used the aliases “Vera Winterose” and, most recently, Clementine Winterland. Her current profile picture is that of Belle from Beauty and the Beast, holding a military rifle. Behind her is the flag of Rhodesia — the former white supremacist state now known as Zimbabwe:

The state of Rhodesia has become something of an obsession among white supremacists, including Dylann Roof, who want to see a return to white-only rule. Other photos shared by Carlisle include a Rhodesian commercial airliner and Rhodesian Prime Minister Ian Smith. She shared a set of photos taken at an Australian rally against “white genocide” along with the caption, “Brothers and Sisters in Staya are stepping up to the plate AGAIN…just like they did when Rhodesia fell!” 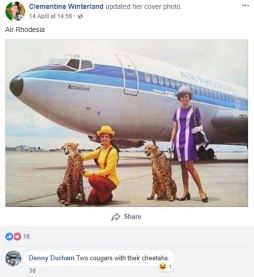 In one Facebook status she wrote “Stand up arm yourselves and slot floppies.” “Floppies” was a derogatory racial slur used by the Rhodesian military to refer to black insurgents. To “slot” them simply means to shoot. One of Carlisle’s friends responded with “Ian Smith did nothing wrong.”

In another she called black South Africans “barbaric people” who, without whites, “would still be in mud huts” having never invented the wheel.

Unsurprisingly she has a deep affinity for apartheid-era South Africa, using the nation’s flag as a Facebook photo filter and wearing a t-shirt combining it with the Wolfsangel.

Roche said he “fell in love” with Carlisle, whom he thought was the “gem of all women,” and said he had “never ever, ever come across a woman with such charm, absolutely the most charming, sweetest, kindest, gentlest, feminine woman in the world.”

The relationship quickly soured however, and the pair broke up. Roche recounted one instance in which he and Carlisle attended an IE event in Texas. He described Carlisle as throwing a fit, “rolling on the floor,” “crying and thrashing about almost as if she was having an epileptic fit.” And he said that same evening she “ripped off” the “porcelain cistern” from the toilet at the house they were staying at and smashed it.

Three members of IE, he claimed, warned him the next night about associating with Carlisle because she’s “completely destructive.” Cantwell indicated that Carlisle has a negative reputation among white nationalists, and told Roche that he’s “not the only guy in right-wing circles that she’s provided these services to.”

Toward the end of the episode, Roche was asked by a caller about Eugène Terre’Blanche, the founder of the Afrikaner Weerstandsbeweging, or AWB — an explicitly Neo-Nazi organization. In 1991, AWB members clashed with South African police officers during the so-called “Battle of Ventersdorp,” which left 4 dead (including 3 AWB members) and 58 wounded.

In 1997 Terre’Blanche himself was sentenced to 6 years in prison for assaulting a gas station worker and the attempted murder of a security guard. He was released in 2004, and 4 years later re-activated the AWB, even founding the movement’s Youth Wing. In 2010 Terre’Blanche was murdered in his sleep after an argument with two employees on his Ventersdorp farm.

Roche told the caller that the Suidlanders have had a “terrific relationship” with the AWB, and often hosted links to their website. “We were proud, we were proud to associate with them,” he continued, “and then we had a disagreement or something. It doesn’t mean that we’ll never talk to each other. In fact, our leaders do speak to each other from time to time.”

As for Terre’Blanche, Roche said “what happened to him was a disgrace beyond disgraces” and “despicable.” And he ended his answer by praising him as a “man of genuine and sincere conviction” who had an “absolute devotion to his people.” Taking these connections into consideration, it appears as if, as far as Roche and the Suidlanders go, white supremacy isn’t a bug, but rather a feature.