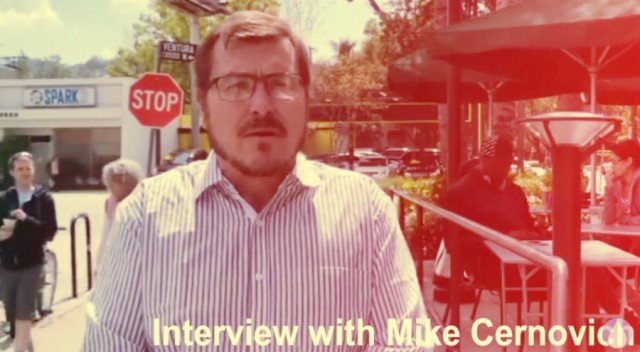 In a video published on March 29, 2017, Mike Cernovich interviewed Suidlanders representative Simon Roche — who, thus far, has now been in contact with multiple white supremacists during his tour of the U.S. Roche’s rhetoric varies little from his previous interviews with Jared Taylor and Henrik Palmgren, but he once again peddles statistics without citation in an effort to fearmonger about white genocide.

Cernovich asked Roche for his “on the ground experience, or feel, or intuition, or assessment” of what is happening currently in South Africa. Roche replied that “conditions are severe” and once again hyped the work of Dr. Gregory Stanton at Genocide Watch, who “made the point that the white people of South Africa were subject” to a state-sponsored “onslaught.”

“In other words,” Roche said, “the 3,500-odd farm murders and rapes and the 74,000 approximate number of murders of white people over the recent past were not purely coincidental and they weren’t purely criminally motivated. That there was some sort of tacit approval or support by powers that he didn’t mention. But of course everybody knew he was referring to the government or the African National Congress.”

Cernovich asked Roche to go into more detail about the “farm murders” because, he asserted, in the U.S. the “fake news media” has “completely covered it up.” Roche said that “farm murders” are an “epidemic” in South Africa to such a degree that it is more dangerous to be a white farmer in South Africa than a soldier in Iraq or Afghanistan.

Citing statistics without a source, Roche claimed, “I recently read a statistic stating that the likelihood of being murdered as a farmer is greater than the likelihood of dying as a soldier — an American soldier — in Iraq or Afghanistan.” True, he does not say where he read this information, but he assured viewers that he verified the statistic “with a simple pocket calculator.” Which should count for something, right?

Partway through the Periscope video, Roche took a break while Cernovich explained to viewers that he, unlike mainstream media outlets, is a real journalist. All while he was filmed upside down, naturally. “Alright, so I’m live talking about issues that nobody else in the media has the courage to talk about, the integrity to talk about,” Cernovich boasted.

It should be noted, however, that Cernovich’s previous journalistic claims to fame have included hyping a false report that Hillary Clinton has Parkinson’s disease, leading a Pizzagate mob against Comet Ping Pong in D.C., smearing comedians as pedophiles, claiming that black men are shot by police because they, somehow, subconsciously will it, and calling white nationalist Richard Spencer a federal agent.

When Roche returned to finish the interview — after a very awkward cut — Cernovich asked him if he feared for his life due to his advocacy for white South Africans. “Yeah, absolutely I do. And I fear for the welfare of my children,” he replied. Despite this fear, he said that he “must do this because somebody has to do it.”

Then he began discussing what he said were photos he had seen of “the little raped girls, little babies raped” in farm attacks. As for his critics, especially those who have wished him ill, Roche said that they should “have it on their heads, the rape of those babies.”

For more coverage of the connection between the Suidlanders and American white nationalists, see Part I, Part II, and Part III.