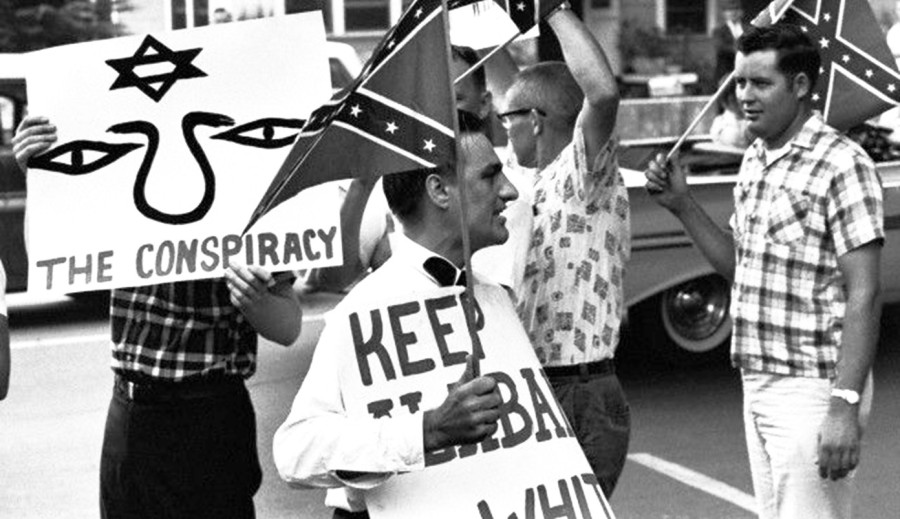 James has long denied being a part of the alt-right movement, in spite of his numerous softball interviews with white nationalists. Of course this denial is belied by James’ own rhetoric and that of his media outlet, which often gives opponents the (((echo))) treatment. Still, his appearance on this podcast is especially troubling.

The show is hosted on the website Radio Wehrwolf, an homage both to the 1910 Hermann Löns novel Der Wehrwolf and the 1944 Nazi plan to form a resistance movement against Allied forces. And its hosts, Blake Lucca and Vanessa Carlisle, post Neo-Nazi imagery on their respective Facebook pages.

Lucca (who also goes by Blake Luccasson) currently uses a picture of a rifle superimposed over the Wolfsangel symbol, along with the caption “Defend Vinland”:

Carlisle, who also goes by the pseudonyms Based South African Girl and Vera Winterose, posted a doctored version of Mort Künstler’s art piece “Nine To Go!”, with anti-Semitic caricatures in the background: 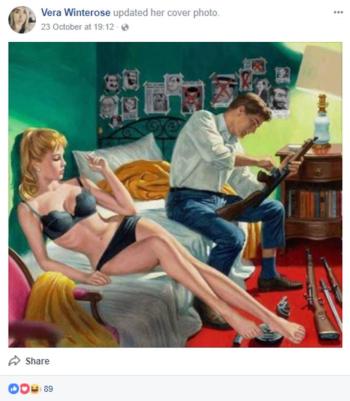 Lucca asked James to explain the rise of Antifa in states like California. James replied that the “root cause of all this is literally a Marxist curriculum being taught in about 90% of universities across the country.”

He added that “most people know about cultural Marxism” — an anti-Semitic conspiracy theory popular with the alt-right — which he blamed for the rise of Antifa and “third-wave feminists with shaved heads, dyed hair, and horn-rimmed glasses.”

James said that an “entire generation” has been raised to view everything through a “Marxist lens,” beginning in kindergarten. And he claimed that schoolchildren are being asked to “find the oppressor and the oppressed” in children’s books, including the works of Dr. Seuss.

“There’s a curriculum that I found online in a kindergarten class, that they were teaching the children to locate who is the oppressed inside of Green Eggs and Ham by Dr. Seuss,” he alleged. James offered no evidence for the existence of this curriculum, but it would be outrageous for educators to politicize Dr. Seuss’ books.

After all, this could lead to stories like Yertle the Turtle being interpreted as a critique of Adolf Hitler and fascism. Or The Sneetches as carrying an anti-racist message. Or The Butter Battle Book as a cautionary tale about the Cold War era arms race. But James considers this all to be part and parcel of what he calls “new wave Communism.”

“They took the proletariat and the bourgeoisie of old Communism, and they’ve turned it into the white male versus the minority today,” he explained. “And so this is what we’re seeing. We’re seeing these kids, knowingly or not, being taught straight-up Marxism, the hate for capitalism, anti-capitalism, these things.”

He also remarked that this “is why we’re also seeing a rise in fascism” as fascism is merely a “response” to Communism.

“And when you have this push for egalitarianism, and everyone’s equal, and everyone’s born the same, and this, this, and that — you have these people that are wanting people to mix up and just create one particular race, and not actually have true diversity. And then we see this rise in the alt-right.”