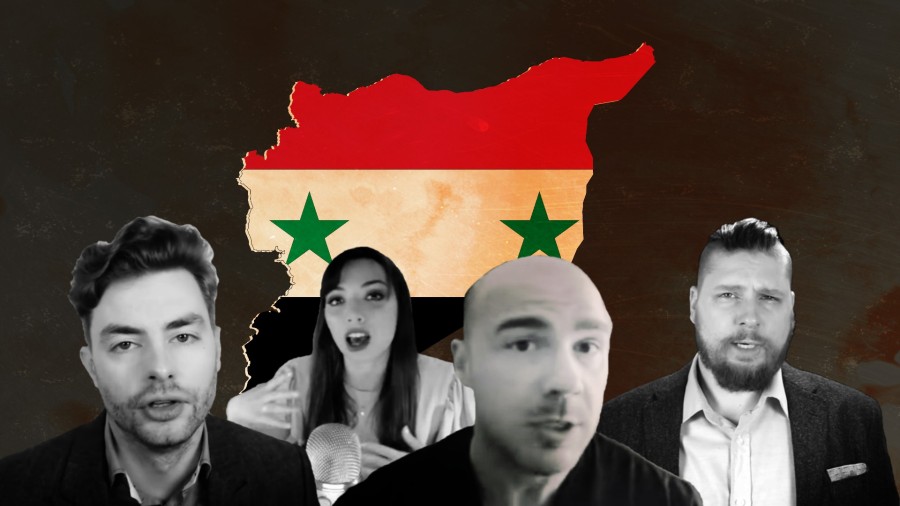 It was reported that on April 7, 2018, over 40 people were murdered in a chemical attack in the Syrian city of Douma. According to reports from the World Health Organization’s Health Cluster partners, “an estimated 500 patients presented to health facilities exhibiting signs and symptoms consistent with exposure to toxic chemicals.”

They concluded that 43 deaths were “related to symptoms consistent with exposure to highly toxic chemicals,” including respiratory failure and disruption to the central nervous system.

U.S., Britain, and France accused Syrian leader Bashar al-Assad of masterminding the attack — Douma, of course, is part of East Ghouta, a rebel stronghold in the country’s ongoing civil war. On April 13th this three member coalition responded with a series of airstrikes in and around the cities of Damascus and Homs. A day later, France issued a report offering evidence of Assad’s involvement.

Meanwhile, Russia — a key ally of the Assad regime — promised “consequences” in response to the coalition airstrikes, which it called a “flagrant violation of international law.” President Putin himself denounced them as an “aggressive action.”

And Russian government officials weren’t the only people crying foul. President Trump’s decision to bomb a sovereign country without congressional approval was blasted by Republicans and Democrats alike as “illegal” and “unconstitutional.”

The left-wing ANSWER Coalition condemned this “criminal assault” on the Syrian people by “colonizers of the Middle East,” and promoted anti-war protests. Code Pink, the anti-war organization that attained infamy during the height of the Iraq War, protested outside lawmakers’ homes.

But it wasn’t just the Left that demanded an end to the bombing. So did the extremist Right, though not for the usual humanitarian reasons. In the lead up to the airstrikes, fringe conspiracy theorists and alt-right activists warned that the chemical attack in Douma — like many atrocities — was actually a “false flag.”

In her appearance on Watson’s show, Susli condemned the White Helmets, a group of Syrian first responders, as “basically [the] Army of Islam or al-Qaeda basically putting on a white helmet.”

The claim that the White Helmets are a terrorist organization or in league with radical Islamists is just one of many unfounded smears against the humanitarian group. According to a report from The Guardian, several of these conspiracies have been linked to a Russian disinformation campaign:

The analytics firm Graphika has spent years analysing a range of Russian disinformation campaigns including those around the Macron leaks and the Russian doping scandal. In research commissioned by the human rights group the Syria Campaign, it found that the patterns in the online network of the 14,000 Twitter users talking about the White Helmets looked “very similar” and included many known pro-Kremlin troll accounts, some of which were closed down as part of the investigation into Russian interference in the US election. Other accounts appeared to generate more than 150 tweets per day (more than 70 is seen by scholars studying bots as suspicious).

Susli also claimed that the White Helmets had been caught fabricating rescues, informing Watson that they “did a very silly video of themselves basically frozen in time, rescuing this guy, and later he comes out and he’s like, ‘Oh I’m fine,’ but his acting during the rescue was as if he was very much in pain.”

As the Guardian article pointed out, this conspiracy centers around a group of White Helmets who posted their version of the “mannequin challenge,” an online video trend in which people “film themselves frozen mid-action.” In 2016 the video was uploaded by the Revolutionary Forces of Syria Media Office, but was “stripped of its context and reshared” in order to prove they staged their own rescues.

But that’s not all. Susli also alleged that the brains behind this organization is an MI6 agent. “And of course, the group is funded by Holland, the U.S., [and] the U.K.,” she added. “And it’s interesting that Holland actually, at the United Nations, said, ‘Oh this is a very trustworthy group.’ Well of course they’d say that because they’re the ones who are paying them!”

This wasn’t Susli’s first InfoWars appearance either. A devoted acolyte of Alex Jones, Susli made an appearance on July 9, 2014 where she claimed that ISIS received covert funding from Saudi Arabia, Qatar, the U.S., and Israel — the “usual suspects” as she labeled them. Nearly a year later she was on the show yet again, defending the Gamergate movement against charges of misogyny, and claiming it was a response to “cultural Marxists” ruining video games.

And she’s associated with other extremist media outlets too. On November 13, 2015, Susli was a guest on the white supremacist podcast Radio 3Fourteen hosted by Lana Lokteff. During the episode Susli and Lokteff chatted about the evil “globalists” seeking to destroy Syria, as well as the similarities between Susli’s birthplace and Nazi Germany — both countries banned secret societies, Lokteff cheerfully pointed out.

Speaking of white supremacists, Lana Lokteff’s husband Henrik Palmgren also weighed in on the Syrian chemical attack — likewise dismissing it as a “false flag.” In an April 11, 2018 episode of Red Ice TV titled “Staged Chemical Attack in Syria: Provoking Irreversible Conflict,” Palmgren claimed that “We don’t know if anyone has been hurt, or if this is just staged, if this is theatre.”

Like Susli, Palmgren repeated the claim that the White Helmets “have staged and faked footage in the past” — e.g., the aforementioned mannequin challenge — and referred to them as a “fake humanitarian group with ties to al-Nusra Front.”

Pointing out that the White Helmets are “often first on site” after terrorist attacks, Palmgren suggested that they might actually be the ones carrying them out. “They just miraculously know where a chemical attack or a bomb will strike and they are ready with the cameras, first on scene to film it, which is, of course, why some people speculate that they are either working with a group that does the attacks, or that they do the attacks themselves,” he said.

After playing a clip of Assad vigorously denying involvement in any chemical attacks — or that a chemical attack even took place — Palmgren stated that he found the Syrian dictator to credible.

He told viewers, “For some reason, for some strange, curious reason, I just feel that I can trust someone like Assad more than the globalists and the mainstream media and the liars, the establishment that are doing everything they can to topple someone like Assad.”

In another episode of Red Ice TV, Palmgren invited on fellow racists Angelo John Gage and Kevin MacDonald. Gage, a white nationalist and Iraq War vet who claims to have been diagnosed with PTSD, has been railing against a potential military invasion of Syria since the April 7th chemical attack. Desperate to believe the vote he cast for Donald Trump was correct, Gage hypothesized that the President was being blackmailed or coerced by the “deep state.”

One possibility Gage suggested was that the recent fire in Trump Tower that killed one person was actually started by “deep state” agents in an effort to threaten Trump. “I feel like, maybe they had to say, ‘Look, it’s a shame your tower’s on fire. Possibly next time you may be in it,'” he told Palmgren and MacDonald. “Why not? We’re dealing with psychopaths that don’t care.”

MacDonald, whose spurious scholarship on Jews has inspired untold numbers of white supremacists, lent credence to the coercion angle, stating he might “feel totally threatened” by the Mueller investigation. Although he struggled to make sense of some of Trump’s actions — his bizarre tweets about launching missiles, for example — he remarked that Trump probably “feels hemmed in by the ‘deep state’ as Angelo was saying.”

And on Stormfront Action Radio, host and League of the South President Michael Hill was quick to call the recent chemical attack a hoax. In response to a caller’s question, Hill claimed the “so-called ‘gas attack'” was a “false flag” or “black operations” conducted by the CIA, Mossad, or MI6. “This [attack] is just too convenient,” he said. “This is a ploy, and it really, really bothers me that Trump has jumped in on it and said, ‘Oh yeah we gotta go back in and do somethin’ about this.'”

“And look, it’s just like Dr. [David] Duke said this weekend in his speech down in Wetumpka,” he continued, “Is Russia our enemy? No, Russia should not be our enemy. They’re a white, Christian country. We should be allies with the Russians in cleaning up the world of the Zionist, Judeo-Marxist influence that is ruining the Western — what’s left of Western Christendom.” And he suggested that the chemical attack and rush to blame Assad might be solely a Mossad operation.

And why is it that so many far-right activists — and white nationalists in particular — are so vehemently opposed to military strikes on Syria? Unlike most anti-war activists, their opposition doesn’t stem from humanitarian concerns for the Syrian people. Instead, it appears to be motivated by a combination of pro-Putin and Assad sympathies, and the belief that such a war would be fought for the interests of Jews.

Take Paul Joseph Watson for example. The InfoWars host has been quick to call Russian meddling in the 2016 election “fake news,” and routinely posts videos like “The Truth About Russia ‘Hacking the Election,'” and “Bullsh*t ‘Russian Collusion’ Narrative Collapses.”

And as early as February 2014 Watson was defending Russia’s draconian ban on “homosexual propaganda” targeted at minors. Bizarrely, Watson attempted to argue that not only were LGBTQ people better off in Russia than in the U.S., but that Russia’s passage of the law actually furthered gay rights. Since then the law, which was ruled illegal by the European Court of Human Rights, has been used to censor pro-gay websites and possibly fueled a dramatic rise in anti-LGBTQ hate crimes.

Other extremist figures like Palmgren, Gage, MacDonald, and Hill believe globalist Jews are working to create conflict between Russia and the U.S. — both “white countries” — while decimating Syria, one of Israel’s enemies. Thus, to bomb suspected chemical plants in Syria is to do the bidding of the “damn Jews” as Michael Hill so bluntly put it. Hence hashtags like #NoMoreJewishWars and #NoWarsForIsrael on Twitter:

Blaming Jews for causing international conflict or sabotaging countries during wartime is nothing new. In fact it’s one of the oldest anti-Semitic tropes in existence. Take for instance this 1919 Austrian illustration blaming the Jews for Germany’s loss in WWI:

Or take these cartoons depicting Jews as political puppet masters. The first is a Nazi-era cartoon while the second was drawn last year by right-wing cartoonist Ben Garrison:

And during the 1990s, the official newsletter for the hate group White Aryan Resistance (W.A.R.) routinely published horrifically racist cartoons drawn by Nick Bougas under the pen name A. Wyatt Mann. These three cartoons draw on the wars-for-Israel conspiracy:

White nationalists are insincere in their calls for peace. They are selective in their outrage, demanding an end to U.S. intervention in the Middle East while supporting policies aimed at ethnically cleansing the U.S. and Europe — gunning down migrants at the U.S.-Mexico border for instance. Pushing for an end to imperialism is a worthwhile endeavor, but there are just some people who have no place in that conversation.