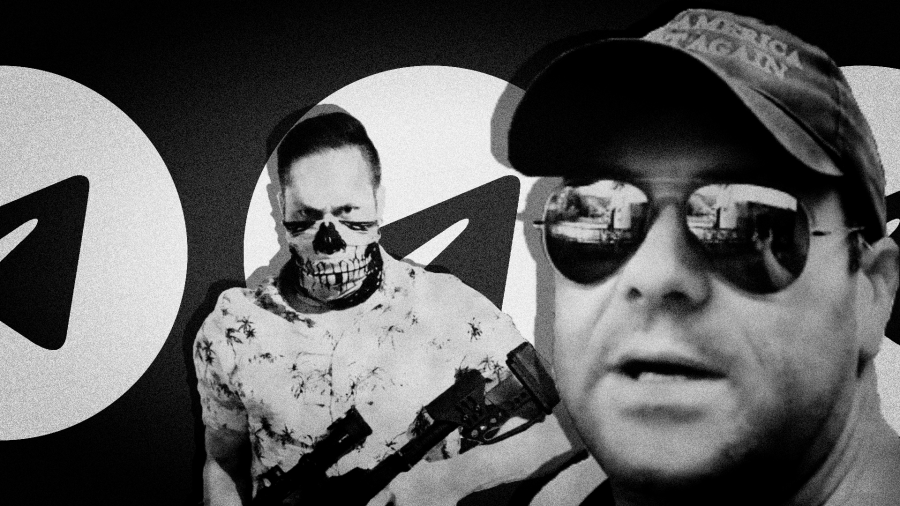 The messaging app Telegram has long been a hotbed of white supremacist activity — particularly among people who openly condone or advocate acts of terrorism and political assassinations. One such Telegram channel with over five thousand members is maintained by the pseudonymous white nationalist “Alt Skull.”

And recent revelations about his heritage are testing the movement’s commitment to “purity.”

On Alt Skull’s Telegram channel, the full name of which I will not give out, people can find any number of posts promoting white supremacist rhetoric. One post he made shortly after the creation of his channel shows a young, white woman staring wistfully with the caption “What if Hitler won?”

Under it was another post: “Let the EBT cards go down and the Boogaloo commence.”

In white supremacist and antigovernment circles, the “boogaloo” references a coming civil war in the U.S. Acts of terrorism and other crises are thought to hasten the outbreak of this conflict, and are welcomed by so-called “accelerationists.” White supremacist accelerationists believe violent acts will cause the collapse of the government and usher in a nation for non-Jewish whites.

One post included a black-and-white photo of Auschwitz with the caption “THAT’D BE A ‘YOU’ PROBLEM.” For Christmas he posted a picture of Adolf Hitler dressed as Santa Claus. “HO-HO HOLOCAUST,” it read.

He once wrote that Jews “fight for the rights of literal invaders to flood your nation, destroy your hometowns, suck off your money, terrorize your children, rape your daughters, murder your brothers and sisters, and finally wipe out your entire race.” He added that they “need to BE stopped. Forcibly and by any means necessary.”

By “any means necessary,” Alt Skull includes acts of mass murder, as demonstrated by his lionizing of Brenton Tarrant, the white supremacist accused of gunning down 51 worshipers in two Christchurch, New Zealand mosques last March. According to his manifesto, the alleged killer said he was motivated by the “great replacement,” a white supremacist conspiracy theory.

In an unlisted video uploaded last year by white nationalist podcaster “Southern Dingo,” Alt Skull said he did not “countersignal” Tarrant’s actions, and called the video of the massacre “one of my favorite videos on Earth.” Instead, Alt Skull criticized white nationalists who talk about violent action on the Internet, only to be arrested for making online threats.

And on Telegram, Alt Skull admonished his followers to reach out to support Tarrant, whose trial is scheduled for June 2020.

“Tarrant is sitting in a tiny, gray cell 23 hours out of the day with nothing to do and no one to interact with,” Alt Skull complained. “How much of your time do you spend shitposting here and on Twitter? Want to do something meaningful? Take 20 minutes out of your pampered, comfortable life, buy a paper book, write a letter, and send both to him. It’s the very least you can do for this movement.”

On one occasion, Alt Skull posted an illustration of Jesus Christ lifting one of Tarrant’s rifles used in the attack. Tarrant had written the names of racist murderers and white supremacist symbols on his weapons, and included the phrase “REFUGEES WELCOME TO HELL” on one. Alt Skull wrote in an accompanying post, “Let god sort ’em out.”

The roots of that slogan can be traced back to the Albigensian Crusade. In 1209 during the Massacre at Béziers, Arnaud Almaric, a Papal legate and Cisterian abbot, allegedly remarked, “Caedite eos. Novit enim Dominus qui sunt eius” — or “Kill them. For the Lord knows those that are His own.” Over the years it became paraphrased as “Kill ’em all and let God sort ’em out.”

Alt Skull, although a practicing Catholic, apparently has no qualms about posting an image of Jesus holding a semi-automatic weapon. Nor did he find anything wrong with referring to Pope Francis, who has taken a notably pro-refugee stance, as a “Satanic child sacrificing piece of shit” in a separate post.

Alt Skull has always been open about many aspects of his life. His Catholic faith. His staunch Republican voting record. The fact that he was raised in Texas and, nearly 20 years ago, moved to Japan. His marriage with a Japanese woman with whom he has two children. He even showed his face in online photos.

In the summer of 2019 he recorded a video in which he outlined a familiar radicalization path. For the sake of transparency, he said, he would explain all the details of his past, prior to white nationalism. Wearing a dusty “Make America Great Again” cap, Alt Skull said he has always “recognized that races are different” and that “culture comes from race.”

However, he had no way of articulating why he believed what he did until he found the alt-right.

In 2015, Alt Skull was introduced to VICE Media co-founder Gavin McInnes — a racist, transphobic, and misogynistic shock jock. Alt Skull said that, at the time, McInnes was “saying all of the things that we say on the alt-right. He was calling out Jews — not to the degree that we do, but he was very honest about them.” (In 2017 McInnes posted a video titled “Ten Things I Hate About Jews.”)

Alt Skull said that what initially grabbed his attention was the “race realism thing” and how McInnes would casually use the N-word. (McInnes had guests such as white nationalist Jared Taylor on The Gavin McInnes Show on the Compound Media network.) He “got involved with the Proud Boys” — the neo-fascist organization founded by McInnes in 2016.

He said he was “one of the charter members” of the Proud Boys and moderated their original Facebook page. He also claimed that, at the Proud Boys’ inception, “it was an explicitly alt-right group.” From there, he began speaking with another moderator of their Facebook group: white nationalist Elliott Kline, better known in alt-right circles as “Eli Mosley.”

Alt Skull described Kline as a good friend of his, and recalled that it was Kline who helped him understand the “JQ” or “Jewish Question.” Kline forwarded him a PDF of The Culture of Critique, a book by antisemitic academic Kevin MacDonald which posits that Jews subvert white nations as part of a “group evolutionary strategy.”

Kline would go on to briefly lead the hate group Identity Evropa. In 2018 a New York Times exposé revealed that Kline exaggerated his military record. And he may face criminal contempt proceedings stemming from a landmark lawsuit against the organizers of the 2017 white power “Unite the Right” rally in Charlottesville, Virginia.

But Alt Skull also made an admission that shocked some of his closest supporters: his paternal grandmother was Jewish. “And I grew up in Texas, and there were no Jews where I grew up, okay?” he explained.

“So I didn’t even understand what a Jew was. I didn’t know that it was a different race. … I certainly didn’t realize that there was a sort of multi-millennia scheme to slowly erode European nations and infiltrate our cultures with the intent of destroying them and taking over the world, and creating a race-mixed class of deracinated, coffee-colored consumer slaves that they could control with their electronic devices.”

He reminisced about his grandmother, whom he never viewed as being different, and who would always bring them presents and a honey-baked ham for Christmas. He certainly never thought of himself as “anything but 100% white” and a “church-attending, enthusiastic Catholic.” And he downplayed what he called the “sneaky part” of his genes.

“The rest of my family — 75% of my family, they’re 100% German. They’re all from Germany,” he assured viewers. But that was clearly insufficient for some people in Telegram’s white supremacist community.

Paul Nehlen, a former congressional candidate who now embraces terrorism as political strategy and hails racist mass killers as “Saints,” was once a devoted supporter of Alt Skull. Nehlen once congratulated him after his channel reached 2,500 members, and called the milestone “well deserved.”

But in a February 15, 2020 post, Nehlen said he “found out someone in a chat was a 1/4 kike,” and “to ‘keep the peace’ I simply avoided the inevitable moment where I had to reconcile hating kikes and tolerating one. That moment is today.” He added bitterly that “Eventually, that kike blood is gonna express itself in a way that negatively impacts the whites even nominally associated with said kike.”

The next day, Nehlen posted, “I’m not the least bit sorry I called out that kike. My conscience is clear. If you sit fences or run with kikes you’ll reap what you sow.” He also branded Southern Dingo a “kike loving fagoooot” for continuing to associate with Alt Skull. And he accused Southern Dingo of lying about Alt Skull’s grandmother by “suggesting she was white.”

Other Telegram channels joined in the fray, choosing either Alt Skull’s side, or Nehlen’s. One posted a picture of a punch bowl with a pile of feces in it labeled “A Jew living in Japan.” Another photoshopped Alt Skull’s avatar inside a Stutthof concentration camp crematorium oven and the caption “THE GOYIM KNOW.”

Meanwhile, Nehlen was accused of being a “Fed,” and one person said he should catch the “boomer flu” — or COVID-19.

Last week, during an episode of Heelturn II — hosted by white nationalist and accelerationist Seth Wallace (a.k.a. “Joachim Hoch”) — Nehlen made a guest appearance and addressed the matter. Nehlen said “this bullshit with Skull, and the rest of his cronies, the rest of his jerk-offs, I don’t care.”

He also referred to Alt Skull’s supporters as “Mossad fuckin’ faggots,” and criticized Alt Skull for downplaying the COVID-19 threat on Telegram.

Although Alt Skull apparently changed his mind on whether people should prepare themselves for the current global pandemic, Nehlen responded by quoting white nationalist social media personality “Nate Higgers” as saying, “The Jew will tell ya 99 truths so they can slip that one lie by ya.”

There are still white nationalists who are standing by Alt Skull, in spite of his heritage and the identity of his family. But what impact this will have on Alt Skull’s standing in the white nationalist community — particularly as factions of it insist on weeding out those who are deemed insufficiently ideologically or racially “pure” — is yet to be seen.