It depicted a brain being cut in half by a blood-red dagger, and at the bottom of the picture there was an apparent source for the claim that pornography increases depression and anxiety — although the font is so small that it is barely legible.

Another graphic claimed that pornography leads to divorce and “wrecks homes.” It depicted a racist Jewish caricature holding a divorce petition next to a pile of money. In front were two white, outstretched hands. Like the first graphic, this too demanded “CAPITAL PUNISHMENT FOR PORNOGRAPHERS.”

The second and third images were stylistically similar to one used by Daily Stormer writer Benjamin Garland for his 2017 book Merchants of Sin, which posits that wealthy Jews are using the adult entertainment industry to destroy white families and the white race as a whole: 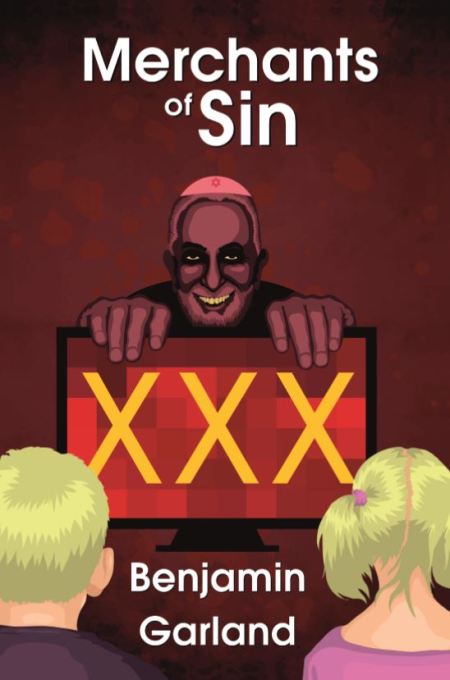 Merchants of Sin was actually adapted from a series of posts Garland made on his personal blog, The End of Zion. In those posts he wrote that “pornography in our current day is almost exclusively a Jewish business.”

Garland further asserted that “there has been a war going on between Whites and Jews, with Whites struggling to maintain a clean and decent society, and Jews fighting to make filth and obscenity acceptable.” The only way to win that war, he claimed, is to “fight against their collective criminal and subversive tendencies on a racial basis.”

Of Merchants of Sin — which Alex Linder of Vanguard News Network turned into an audiobook — Garland boasted, “If this book doesn’t make one want to rid the world of Jewry, than I don’t know what will. This is a sick bunch of (((people))) we are dealing with.”

Meanwhile, at 4chan, anonymous posters declared that it was “TIME TO DECLARE WAR ON (((PORNOGRAPHY))).”

“We must keep up the pressure,” one wrote. “Pornography is designed to destroy families, which is why the product is free and so heavily promulgated by the worst sorts you can think of. Anti-porn is the worst the thing these (((globalists))) can think of, since pornography is the locus of their anti-Western agenda.”

In another 4chan thread, titled “The Pornographer Cries Out in Pain As He Strikes You” — a play on a popular anti-Semitic slogan — one of many anonymous posters wrote, “In the Wiemar you kikes were pushing ‘non interference’ with prostitution, then you flee from that mess, and come to the US and do the same shit.”

He added that “Hitler did nothing wrong and neither did Joseph Paul Franklin.” Franklin was a white supremacist serial killer who confessed to shooting and paralyzing Hustler magazine founder Larry Flynt in retaliation for an interracial photo shoot. Franklin was convicted and, in 2013, executed for the 1977 murder of Gerald Gordon.

@Volocaust, who uses a picture of William Luther Pierce as his avatar, posted a quote by Joseph Goebbels: “The Jew is immunized against all dangers: one may call him a scoundrel, parasite, swindler, profiteer, it all runs off him like water off a raincoat. But call him a Jew and you will be astonished at how he recoils, how injured he is, how he suddenly shrinks back: ‘I’ve been found out.'”

@Alvaro_Berardi warned that “You shouldn’t fear some nonut november [sic] movement, but you should definetly [sic] fear the rope.” Others responded with anti-Semitic imagery of their own, particularly variations on the Happy Merchant meme — a caricature of a hook-nosed, scheming Jew:

Some found more clever ways to post it without getting banned:

White supremacists typically view pornography as “degenerate” and harmful, especially when it depicts interracial couples, particularly black men and white women. British Neo-Nazi Mark Collett once claimed, for example, that interracial pornography was akin to taking white women as “a spoil of war.”

In fact, this is one of the aspects of the Proud Boys that garnered respect from white supremacists like The Right Stuff’s Mike Enoch.

However, white supremacists’ unhinged fixation on the Jewish role in the adult industry coupled with their threats to execute “pornographers” could lead to mass murder. As we saw nearly two weeks ago at Pittsburgh’s Tree of Life synagogue, such a result is not out of the realm of possibility, and we should take this rhetoric very seriously.