On July 28, 2019, far-right MMA fighter Tara LaRosa tweeted a supposed list of anti-fascist activists and organizers ahead of an upcoming Proud Boys rally in Portland. According to LaRosa’s tweet, the imageboard site 8chan “just released a massive, comprehensive list of every single #Antifa member and organizer.”

The problem, however, is that the list is a hoax created by racist trolls.

The list was devised on 8chan, an extremist forum where white supremacist terrorists have uploaded their manifestos. On the 8chan thread in question — the tag line of which is “Gas the kikes, race war now” — the top post states “Fight fire with fire. Semper fidelis.” What follows is a list of alleged anti-fascists.

Yet as BuzzFeed News reported in 2017, the list was merely created by using the names of people who signed an anti-Trump petition from Refusefascism.org. Other names were taken from groups such as By Any Means Necessary (BAMN), a pro-immigrant organization, and David Brock’s left-wing ShareBlue website.

In other words, the list is of random left-wing individuals and not of committed anti-fascist activists and organizers. As The Daily Beast pointed out last year after it was revealed that Louisiana police officers fell for the hoax, “antifa” is not a structured organization, “making a ‘full list of antifa’ impossible to compile.”

What’s more, the website LaRosa linked to was that of The Red Elephants, an alt-right media collective whose founder, Vincent James, has made appearances on white supremacist podcasts. 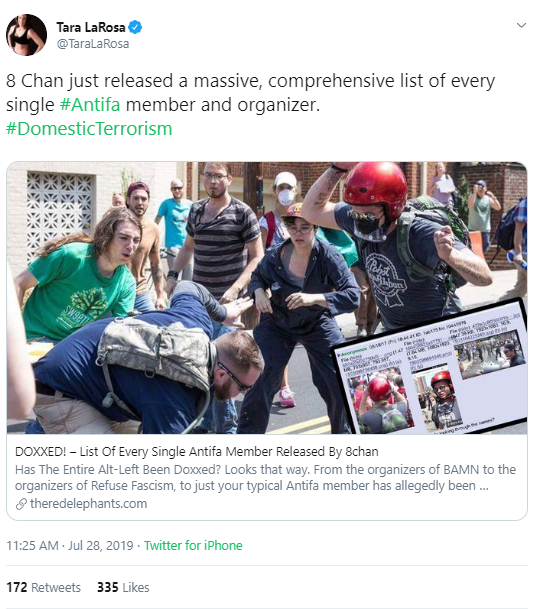 In October 2017 James appeared on a podcast hosted on the Neo-Nazi website Radio Wehrwolf and ranted about “cultural Marxism.” During a September 2018 appearance on the white nationalist Red Ice TV, James blamed Jewish people for social media bans, telling the host that members of the Anti-Defamation League are “connected very similar in DNA to [Facebook COO] Sheryl Sandberg.”

When Twitter users pointed out that LaRosa had linked to white supremacist misinformation, LaRosa lashed out, telling one person “STFU you misandrist, libshit, socialism-lovin’ bitch” and “Take your feminist bangs and kindly fuck off”:

This reaction is entirely unsurprising given LaRosa’s affinity for the far-right Proud Boys group, whose members have engaged in bloody street brawls with anti-fascists. Leaked chat messages revealed several Proud Boys plotting violence at their rallies, while making it appear as though are acting in self-defense.

In early 2018 the Southern Poverty Law Center designated the Proud Boys as a hate group.

In an October 19, 2018 tweet, LaRosa wrote, “I roll with the #ProudBoys and I’ll be in Portland, OR for the #HimToo rally November 17th.” The misogynistic #HimToo rally was organized by Patriot Prayer member Haley Adams as a response to the Supreme Court confirmation hearings for Brett Kavanaugh, who had been accused of sexual assault.

Adams has used the #WHITEPRIDE hashtag on social media, and was photographed at a rally wearing a helmet sporting 4chan’s racist “It’s OK To Be White” slogan.

LaRosa currently works as a “cage fighter” who “teach[es] other people how to fight and defend themselves for a living” according to a May 11, 2018 tweet.

LaRosa confirmed her profession in an August 13, 2018 tweet. “I’m a realtor in MI, and can absolutely hook you up with someone” she wrote in response to a woman who needed a realtor in California.