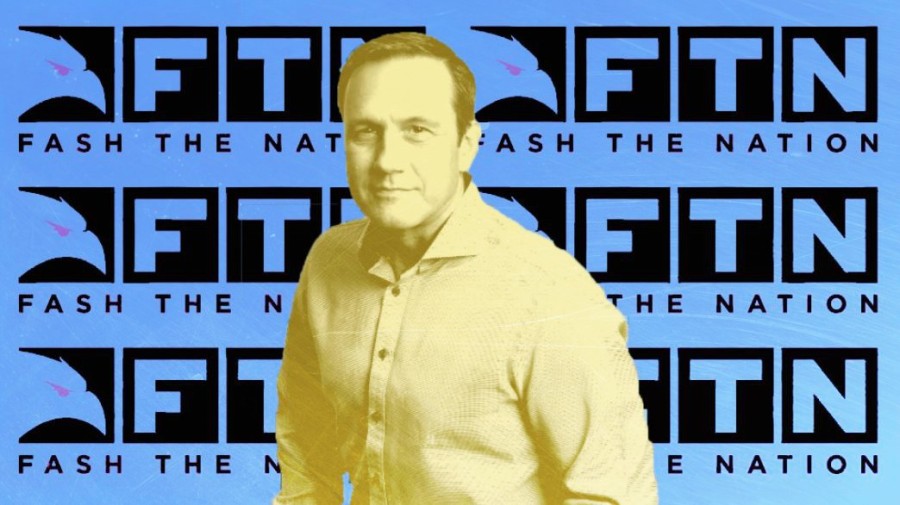 On December 9, 2017, Jazzhands McFeels and Marcus Halberstram celebrated the 100th episode of their white power podcast Fash the Nation with special guest Paul Nehlen. A self-described small businessman with clear white nationalist sympathies, Nehlen is one of many “America-first” candidates recruited by Steve Bannon to challenge establishment Republicans in 2018.

This marks Nehlen’s first appearance on Fash the Nation since last year, when he called for an end to birthright citizenship and smeared Muslims as anti-American infiltrators. During this appearance, Nehlen was fresh off a Twitter spat with John Podhoretz, the editor of Commentary.

The feud began over an argument between Nehlen and Free Beacon writer Stephen Gutowski over H. R. 4477 — which Nehlen called “gun grab legislation” by Paul Ryan. Gutowski said the bill does the “exact opposite” of what Nehlen said, and Nehlen called Gutowski a “dumdum” and tweeted, “I don’t have feelings. I have facts. You’ll regret you weighed in on this.”

John Podhoretz then stepped in, calling him a “ludicrous idiot” who “lies like he breathes.” Nehlen responded by telling the Jewish conservative to “self-deport.” And in a now-deleted tweet, Nehlen also told Podhoretz to “eat a bullet.”

“So Bannon’s catamite @pnehlen has, in the past 12 hours, suggested I commit suicide and called on me, born and raised in the U.S. but Jewish, to ‘self-deport,'” Podhoretz shot back. Nehlen replied with, “Who said anything about Jewish? Oh right, you did. It would be more appropriate for you to self-deport to Mexico, where you open borders globalists like to get your cheap labor.”

Who said anything about Jewish? Oh right, you did.

It would be more appropriate for you to self-deport to Mexico, where you open borders globalists like to get your cheap labor. https://t.co/2MMjPCJcTv

As Nehlen later told McFeels and Halberstram, “If people watch you stand in the face of the people like [the] John Podhoretzes of the world, the people who wanna throw their parentheses at you — I have no time for that. I’m not afraid of those guys.” The “parentheses” remark was likely a reference to the alt-right echo meme, in which white nationalists place the names of Jews in triple parentheses.

Continuing with his thinly-veiled anti-Semitism, Nehlen said he is only afraid of his God, and that he will never back down “to any religion, whether it’s Judaism or Islam or anything.” “It’s our duty not to,” McFeels replied, “That’s exactly right. John ‘Eat a Bullet’ Podhoretz.”

Nehlen said that he “got shoah’d for 12 hours” for sending that threatening tweet to Podhoretz. “Shoah” is the Hebrew name for the Holocaust, but in alt-right parlance it means losing access to one’s social media account. The purpose, therefore, is to mock and belittle the Holocaust by equating it with something trivial.

He also called John Podhoretz a “filthy pedophile,” offering nothing to substantiate this claim save for the fact that Podhoretz referred to him as Steve Bannon’s “catamite” — which Merriam-Webster defines as a “boy kept by a pederast.” “What race even has that word?” Nehlen asked. “Well, there’s one.” McFeels laughed and called it a “very biblical term.”

Nehlen then boasted that he was able to raise over $150,000 for embattled senate candidate and alleged child molester Roy Moore. A fitting decision given Moore’s remarks about Jewish philanthropist George Soros being destined for Hell.

Nehlen told McFeels and Halberstram that many of his supporters heard him on Fash the Nation, and boasted that “the red pills are bein’ shot at people like with bump fire stocks” — “red pill” is another phrase associated with the alt-right and men’s rights activists. And after blasting Paul Ryan for taking cues from Jewish “paymasters” like Paul Singer and Sheldon Adelson, McFeels vowed to “make sure” Nehlen gets elected next year.

Nehlen also elaborated on his relationship with Breitbart News executive chairman Steve Bannon, who convinced him to run against Paul Ryan last year. Nehlen said he and Bannon met again at St. Louis for the most recent Eagle Forum gathering, where Bannon cajoled him into taking a trip to Alabama. While there he met Roy Moore, ex-UKIP leader Nigel Farage, and “a lot of other good people.”

He recalled that the next time he and Bannon crossed paths was at an event for the anti-immigrant Remembrance Project in Washington, D.C. The relationship between Nehlen and Bannon is close — Nehlen affectionately called Bannon a “fucking ball of fire,” while Bannon once called Nehlen “our kamikaze” against the establishment.

“Bannon’s a very supportive guy, I love to see him fighting,” he gushed. “I heard that clip of him rippin’ [Mitt] Romney a new one — that was outstanding. Romney. What a joke! Mitt Romney…”

Finally, Jazzhands McFeels told Nehlen that he was hoping both he and Moore would win their respective races. Nehlen thanked him and praised the racist podcasters’ work, and said he was “honored” to make a guest appearance on their 100th episode. But McFeels and Halberstram aren’t the only white nationalists Nehlen supports.

After the white nationalist group Identity Evropa displayed a massive banner in Atlanta, GA bearing their group’s name, logo, and the slogan “AMERICA FIRST, END IMMIGRATION.” Nehlen previously retweeted their work, but referenced it again during the episode.

“Yeah, that was awesome,” McFeels said. “I wish there was an angel investor, someone out there that could make a hundred of those banners happen every single weekend, in every major city.”