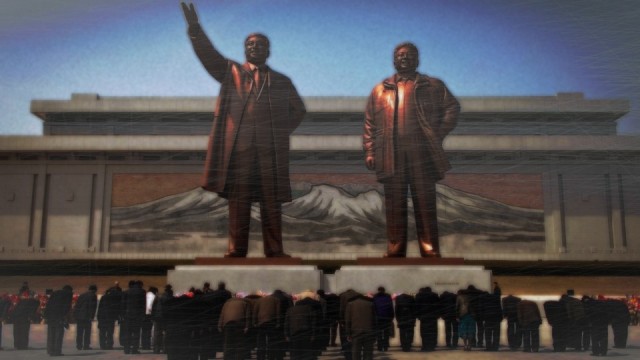 Just when you thought this election season couldn’t get any weirder, alt-right activist Matt Heimbach of the Traditionalist Youth Network recently sang the praises of “Dear Leader” Kim Jong-Un and North Korea.

In his Daily Traditionalist podcast, Heimbach announced that he finished reading the (excellent) book The Cleanest Race: How North Koreans See Themselves and Why It Matters, which reveals North Korea has more in common with fascist and National Socialist regimes than Stalinist ones. The propaganda of North Korea, for example, places a heavy emphasis on racial purity and militarization.

So, in honor of North Korea’s Independence Day, Heimbach informed his audience of the similarities between the DPRK and other nationalist movements and, in fact, urged them to support the totalitarian regime. “So where does this stand for us, of course, as white nationalists in the West if we understand that the DPRK is not how it is presented [by Western media], is not Communist?” he asked rhetorically.

Although he noted that there were “problems” with North Korea, such as food shortages caused by Western sanctions, “even in the midst of famine” the North Korean people refused entry to foreign workers — something he says would have opened up the nation to intermarriage. They would “rather suffer temporarily” and “ensure the continued nature of their people, to continue the blood of their people.”

That is a “sentiment that we, in the West, need to be able to respect,” he asserted. In fact, North Korea should be viewed as a “great model” for white nationalists in the West. He even spoke glowingly of North Korean viewpoint that the national leader is a father figure of sorts who sees their people as their own children, and compared Kim Jong-Un favorably to Adolf Hitler and other nationalist leaders.

(Heimbach misspoke and identified the current leader as Kim Jong-Il, who died in 2012. However, the Great Leader Kim Il-Sung is still technically the head of state, making North Korea, as Christopher Hitchens once humorously remarked, a “necrocracy” or a “mausolocracy.”) Heimbach complained that the West was “never told” that North Korea’s “entire ideology is based upon ethnic culture and community.”

So where does this stand for us, of course, as white nationalists in the West if we understand that the DPRK is not how it is presented, is not Communist? Of course, there are problems within the DPRK. Food shortages were a huge problem in the 1990s. And, of course, that was actually brought on by the West.

I mean I hate to always come back to that, but the Western governments actually implemented sanctions where the North Korean economy that had been importing a large amount of its food — of course the Soviet Union falls, they had been importing a lot of food from [them], and the West cut them off — that they had to realign their economy agriculturally.

Who is going to pay the pensions of white Europeans and white Americans if we don’t let these people from other cultures and communities come in? They need to come. They’re a youthful, vibrant culture, right? They need to come in and have children, and to be able to work and pay our pensions.

That even in the midst of famine, even in the midst of suffering — their people were starving to death and eating roots and cooking tree bark in stews and things like that — the North Koreans did not open themselves up to foreigners to come into their country, which of course then would eventually end up intermarried in with their community. I mean that’s why they had to send the workers back from Germany in the 1960s. That they would rather suffer temporarily to ensure the continued nature of their people, to continue the blood of their people.

That is something that is a natural sentiment we in the West need to be able to respect, and see the DPRK as a great model. Because we in the West have been told time after time again that we must basically commit racial suicide for creature comforts, for material comforts, to bring these people in to do the jobs we won’t. Well that’s not something they have in North Korea. The farmers and the [inaudible] and the engineers and the street cleaners and everyone has the sense of duty and honor to one another as the national community.

The idea of the eternal leader — of course Kim Il-Sung is that, and Kim Jong-Il is of course the current leader of North Korea — the idea of this parental figure that they speak of, if you look of course, you know, Adolf Hitler or other nationalist leaders who were National Socialists, talked about the leader being the embodiment of the people. Being the voice of the people. And this goes back, you know to Russia. The Czars were called the father of the nation. That’s something that we’ve had in European culture for a really long time. That the leader is the embodiment of the nation. And the nation sees itself in the leader, and the leader cares for the people as if they are their own children.

And this is a true nationalist sentiment. That is something that we, you know, the West, is never told. That that’s what North Korea is doing. That their entire ideology is based upon ethnic culture and community.