Gab CEO Andrew Torba has made it clear that his social media platform will allow almost any content without the threat of censorship — which is why it’s no surprise that white supremacists have flocked to it since its creation in 2016. That isn’t to say that there are no rules on the website. Supposedly, encouraging violent acts and promoting self-harm is verboten.

According to Gab’s Community Guidelines, users are “prohibited from calling for the acts of violence against others, promoting or engaging in self-harm, and/or acts of cruelty, threatening language or behaviour that clearly, directly and incontrovertibly infringes on the safety of another user or individual(s).”

One of Torba’s (many) complaints about rival platform Twitter is that it has been lax in detecting and terminating pro-ISIS accounts. (Recently, several ISIS beheading videos had to be purged from Gab TV as well.) But what happens when a pro-Nazi domestic terrorist organization spreads its propaganda on Gab?

Apparently the answer so far is: Nothing.

Gab’s “groups” feature has been criticized for making it easy to find like-minded white supremacists on the site. This includes a group called “Read SIEGE” which boasts nearly 400 members and is dedicated to the writings of Neo-Nazi James Mason, as well as the group Atomwaffen Division (AWD). AWD members have already been implicated in several murders, including that of a gay, Jewish college student.

According to a report by ProPublica, which obtained the group’s chatlogs, Atomwaffen “embraces Third Reich ideology and preaches hatred of minorities, gays and Jews,” and has “as many as 20 cells around the country, small groups of indeterminate size in Texas, Virginia, Washington, Nevada and elsewhere.”

AWD chatlogs show members discussing “using explosives to cripple public water systems and destroy parts of the electrical power grid.” Several of them praised Timothy McVeigh, whose bombing of the Alfred P. Murrah Federal Building on April 19, 1995 killed 168 people, including 19 children under the age of six. The report notes that mass murderers Dylann Roof and Anders Brievik were praised as well.

Members of the “Read SIEGE” group have engaged in similar discussions, often posting messages glorifying various Neo-Nazis and terrorists, and encouraging others to kill minorities. “I bet you swerve to hit [black people],” wrote Laurence McClean. “I do. Just kind of nasty if you have to dig nigger slime out of your tires.”

One especially prolific poster who uses the alias “George Lincoln Rockwell” posted a cartoon advocating nuclear war against Israel. It depicts a man dressed in an American flag shirt fist-bumping a man with the Iranian flag on the back of his. Above them a caption states “THE ONLY THING THE JEW TRULY FEARS.” Below them it reads “Let’s glass the kikes.” 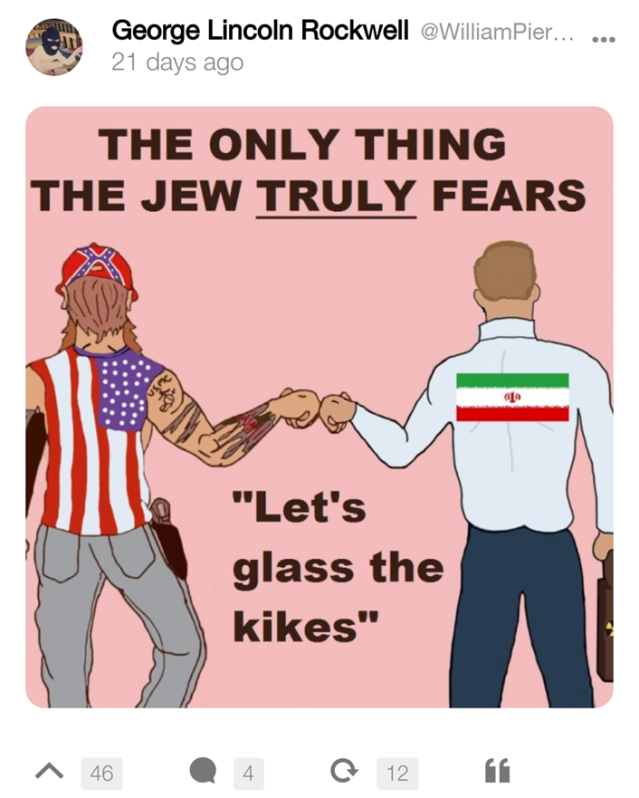 A member named Norman Spear expressed his admiration for terrorist Ted Kaczynski — better known as the “Unabomber.” “Unabomber pledged to stop his deadly attacks if the New York Times & Washington Post published one of his manuscripts — They did,” Spear boasted. “Now imagine if there were 10 ‘unabombers’ or 100 or 1000 who all shared one clear & practical political demand. How long until the system capitulated?”

Frederick Namington wrote that there is “no difference between the normalnigger and the kike. They empower and feed off of one another. Nobility means slaughtering them indiscriminately and celebrating those who in the name of truth have given up their lives.” Among those celebrated on “Read SIEGE” are Dylann Roof, Anders Breivik, and cult leader Charles Manson, whom SIEGE author James Mason has an obsession with.

It is quite common to see group members boasting of their collections of Mason’s books or Charles Manson murderabilia. Photos of Manson’s records, signed copies of SIEGE, weapons, and Nazi flags are ubiquitous:

Members also brainstorm strategies for creating better propaganda and for communicating with one another without fear of being watched. In one post, Mengele Manson asked other members about “good ideas for propaganda,” but added, “I think most of our efforts should be directed to causing problems between the government and  non-whites.”

In another post, he wrote that he wanted to “start networking with other like-minded people soon,” and advised people to use “Wickr to communicate on cheap phones that haven’t been activated or Ricochet on computers.” Iron Eagle plugged a “New encrypted social media site for like minds of NS, Fascism, etc.” called “Fashbook.”

Some strategies involve openly discussing the best hypothetical targets. Jack Rurik wrote that the “key element” is the point when “you no longer see your doctor, mailman, county clerk, etc. as simple workers on ‘your side.'” He claimed that such people are “the eyes and ears of the illegitimate authorities” and that one must “deal with them as such.” Frederick Namington agreed, and called them “enemies.”

One member named Trajan denounced lone-wolf terrorism as counterproductive, citing Dylann Roof as an example. “[S]ure you shot a few niggers and maybe it made you feel good for a few hours, but then you end up in a prison cell for life,” he wrote. Namington wrote back that James Mason “took a shit all over you and your cowardly muh pr types,” and posted an archived link to a NOOSE article which called Roof’s target “spot on.”

And, much like the Atomwaffen chatlogs, a member named KaliUnleashed all but advocated sabotaging the Hoover Dam’s cyber security. “Wow, it sure is scary how vulnerable the system is thanks to H1B-Pajeets and niggers not knowing shit about security,” he wrote. “I sure hope no-one takes it upon themselves to exploit the numerous vulnerabilities to create mayhem all over the nation.”

They also use Gab to share links to PDFs of white supremacist publications like William Luther Pierce’s The Hunter, to AWD propaganda videos on Bitchute and elsewhere, to messages from AWD leadership, and to the website Siege Culture, where James Mason continues to post essays and recordings of his thoughts — usually on topics like Jews and race-mixing, but also extraterrestrials. In a long, garbled essay Mason floated the idea — in all caps no less — of “DNA COLONIZATION FROM DEEP SPACE.”

But AWD fans aren’t limited to this one group on Gab. A Gab user named Charlie Manson posted a photo purportedly of James Mason and two unknown individuals whose faces were covered by Totenkopf (“Death’s Head”) symbols. At their feet was a cut-out photo of Jewish talk radio host Alan Berg shortly after he had been murdered by members of The Order — a Neo-Nazi terrorist group.

Elsewhere on Gab, a user named Libertarian Nationalist used a photo of Berg’s corpse to threaten a former Newsweek reporter. “This isn’t a game or talk show for us,” he wrote menacingly. “This is real life. You can make jokes like a dishonest faggot or you can try to understand. Either way… The Order did nothing wrong. 1488.”

He punctuated his threat with the hashtag #MakeJournalistsAfraidAgain. Although several requests were made for Gab to remove the threatening post, it still remains a month later.

Another AWD fan posted this image in support of ISIS:

This same user wrote: “Some say that having or holding on to hate is like clutching a glowing coal, only burning yourself.  Instead, as heat tempers steel, use it to temper your ideology, learning and perfecting the path of a true revolutionary.  One step at a time.  We will not surrender!” He ended the post with the hashtag #Atomwaffen.

With his sluggish policing of threatening content and his look-the-other-way attitude toward violent white extremists organizing on his platform, perhaps Andrew Torba shouldn’t be so quick to scold platforms like Twitter and Facebook for their failings. At least not until he’s cleaned up his own backyard first.