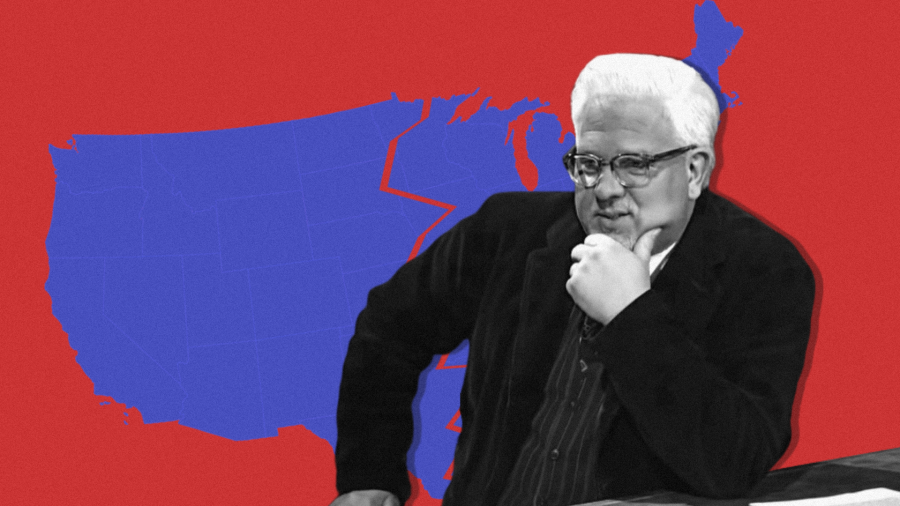 In an Oct. 13, 2021 segment for his BlazeTV show, right-wing radio host Glenn Beck promoted the idea of a “national divorce,” in which right-leaning states secede and form their own country. During the segment, Beck suggested a “national divorce” may be the only solution while simultaneously claiming he opposes it.

Beck summarized all the reasons why the U.S. might be headed for a dissolution, including the “chemical castration of our children” without parental consent (which isn’t happening), the teaching of critical race theory in K-12 schools (also not happening), and vaccine mandates.

While he cautioned that he was not “hoping for the break-up of this country,” Beck stated that he “fear[s] this country is now so far divided that we may never get back to the way it used to be.” And he fearmongered about a socialist “revolution” which has supposedly engulfed the country. One which involves the Democrats’ infrastructure bills and billionaire George Soros (take a shot).

He quickly pivoted to promoting the very thing he said he opposed. “National divorce — maybe it is time,” he said. “I mean, places like Texas have been talking about secession for a very, very long time. But now they’re talking about it in New Hampshire. Everywhere you look now the concept of national divorce is being floated as the only option for liberty and freedom in our country.”

To prove this point he touted the results of a recent poll conducted by the University of Virginia’s Center for Politics which found that a majority of respondents (52%) for voted for Trump want to split the country in half. 41% of respondents who voted for Biden favor dividing the country along ideological lines as well.

“There is no fringe, right-wing joke about secession anymore. Even progressive media has been talking about it. Have we really, truly reached that point? I think we have. … Do we have equal rights? When they force an injection in your arm while sending federal cops to keep you from having an opinion over your child’s education at a local school board meeting, when they’re spying on what you spend your money on, are they protecting your rights?”

Beck then brought on a guest who recently wrote an article which presented a “national divorce” as an inevitability — author and Claremont Institute Fellow David Reaboi. In an Oct. 1, 2021 Substack article, “National Divorce Is Expensive, But It’s Worth Every Penny,” Reaboi wrote that “National Divorce or some other, more tragic and chaotic outcome won’t be impossible forever.”

He also largely blamed “progressives” and left-wing “fanaticism” for this outcome, and claimed that “While Red America isn’t really interested in imposing its will on Blue America, it’s clear that the reverse is emphatically not true.”

Beck told viewers that Reaboi’s article is a “must-read,” and claimed that he had been “warning about this and warning about this” for some time. “And we’ve passed all the exits that I know of,” he told Reaboi solemnly. “And it feels impending now. It feels like it’s here, and about to get much worse very soon.”

Reaboi agreed with Beck, saying that “everyone feels it.” “It’s not an accident that a lot of people are talking about national divorce. They’re talking about things in kind of apocalyptic terms because we’re basically there in many ways,” Reaboi claimed. “As you said, we no longer agree on the foundational things that make America America.”

Beck complained that the people he speaks with “think that this kind of talk is over-the-top.”

Reaboi called this the price of Beck being “ahead of the curve” on this issue. Addressing the people who are uncomfortable with the dissolution of the U.S., Reaboi claimed that anyone with “heterodox” opinions will “have problems” banking, sending their children to school, and doing business with companies.

“People don’t believe that,” Beck said. “They think that’ll never happen. It’s here. They’re firing people now if you don’t have the vaccine. And it’s not even a law.”

Both Reaboi and Beck suggested that conservatives prepare for this inevitable “national divorce” by creating their own businesses and financial institutions. “We’re gonna need insurance companies, we’re going to need, as you said, banks,” Reaboi told Beck. “We’re going to need doctors and nurses. Real estate brokers. Everything.”