With nearly 900,000 subscribers, pseudo-philosopher Stefan Molyneux might be the most popular white nationalist on YouTube. For years he has put out a steady stream of videos attacking women (particularly single mothers and feminists) and people of color, the latter of whom he tells viewers have lower average IQs than white people. Even before he explicitly came out in support of white nationalism he had long been dabbling in scientific racism and conspiracies.

In other words, he and his Freedomain Radio show had served as a gateway to the alt-right and other extremist movements.

But with that explicit embrace of racism comes an important question: Why is Stefan Molyneux allowed to continue broadcasting on YouTube unabated? Conspiracy theorist Alex Jones, who used his own YouTube channel to promote bigotry and harassment, was banned from the platform last summer. And after a recent Wall Street Journal exposé, racist YouTuber Ethan Ralph was likewise banned. Yet Molyneux is allowed to continue radicalizing his viewers with increasingly deranged conspiracies about white genocide.

A recent video on non-white migration to Ireland perfectly encapsulates Molyneux’s racist rhetoric. In the video, titled “The Terrible Truth About ‘Ireland 2040,'” Molyneux criticizes a plan by the Irish government to prepare for thousands of migrants by the year 2040, which he says is a step toward the destruction of Ireland and the white race as a whole.

He claims, for instance, that advocates of zero population growth — a state of demographic balance in which a population neither grows nor declines — were only trying to convince white couples to refrain from having children while “import[ing] the Third World” into majority white countries. Molyneux called this “quite a bait and switch” and said it was a “horrifying thing to do to a culture, to a people, to a history, to a race.”

He repeated the white nationalist slogan that diversity “means fewer white people.” This is one of the more popular catch phrases used by white supremacists looking to advance the bogus narrative of “white genocide” — the harebrained belief that white countries are being flooded with non-white immigrants in order to “blend whites out of existence.”

Here is a sample of propaganda taken from a white nationalist Twitter accounts:

Molyneux recently retweeted an anti-Semitic “white genocide” meme to his 383,000 followers. It depicts a stick figure with a large nose informing a group of white people that they are “too White” and need to “Accept diversity”: 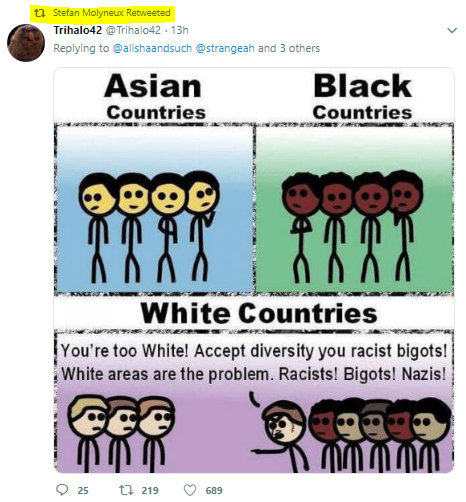 Later in the video he told viewers, “You know, interestingly enough, there’s a pretty good way to have strong social cohesion, and that’s to have people of the same race and culture in a country.” He added, “It’s just the way it works!” He lamented that the recent legalization of abortion in Ireland combined with a future increase in non-white immigration will lead to non-whites being given “resources” at the expense of whites.

He also referred to this as “population replacement” — which is just “white genocide” by another name.

Molyneux claimed that the population of Africa has “gone up so enormously” because “white countries have been dropping huge amounts of food and money” in African countries whose citizens, he believes, are too stupid to do anything but breed. “If you give money to people with a high IQ they generally convert it into things like education and art and so on — with some kids,” he said. “If you give a huge amount of resources to people with a low IQ they just have more and more and more children.”

Instead of Africans immigrating to other countries, he sarcastically said they should stay in their own and “produce the next Amazon, produce the next whatever innovation — jet packs and teleportation devices and automated spaceships or whatever.” Of course, he added, they cannot do this because the average IQ is in the “low 70s” which is “the cut-off, or at least it used to be, for mental retardation.”

And he ludicrously claimed that white people were never told decades ago to have more children because of a plot to “[reduce] the white population.” Molyneux said that this plan was motivated by “anti-white hatred,” and that “white success is always ascribed to racism and theft and colonialism and stealing resources from the Third World.” These claims are indistinguishable from anything one would hear from any other white supremacist media outlet.

Perhaps it’s time people started asking the people at YouTube why they continue to allow Molyneux the privilege of not only spreading his racist propaganda, but profiting from it. If Alex Jones’ rants crossed the line, then doesn’t a crank who peddles racist pseudoscience and conspiracy theories deserve the exact same punishment?

The following clips were taken from a 2 hour and 12 minute video: