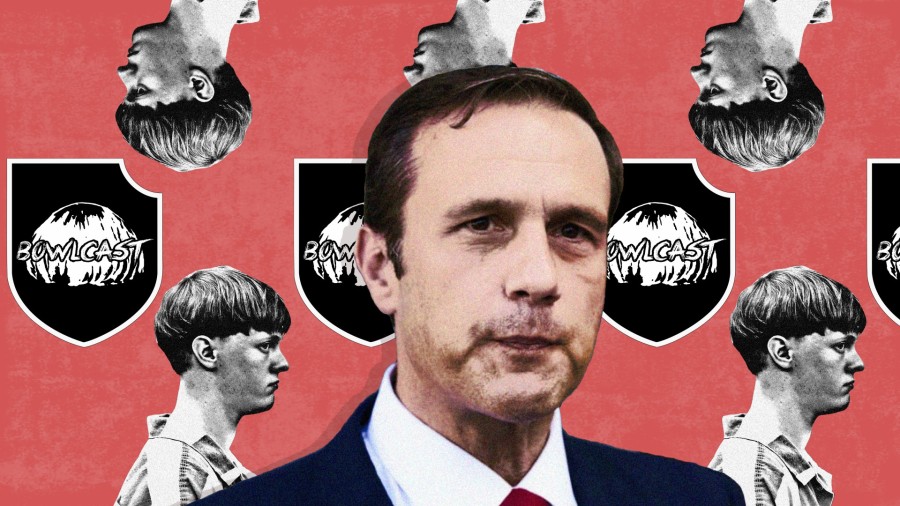 Ever since Paul Nehlen’s white supremacist beliefs were exposed last year, the Wisconsin also-ran has slid further and further into irrelevancy — and has become increasingly unhinged in the process. Nehlen moved from The Right Stuff’s Fash the Nation podcast to The David Duke Show to Christopher Cantwell’s Radical Agenda.

And on April 19, 2018 he took things even further by appearing on a Neo-Nazi program called the Bowlcast — a low-rent podcast which borrows its name from the hairstyle sported by Dylann Roof, who, three years ago, gunned down nine black parishioners in cold blood.

The show’s hosts refer to their ideology as “esoteric Bowlcutism,” republished Roof’s unedited manifesto on their website (which I’m not linking to), and briefly sold Roof-themed clothing and mugs on Teespring. The items were pulled following a Newsweek exposé, and Teespring’s management confirmed only 13 t-shirts had been purchased.

Just as disturbing as their veneration of Roof is their loyalty to the Atomwaffen Division, a Neo-Nazi terrorist group linked to five murders. Atomwaffen (German for “atomic weapons”) borrows heavily from SIEGE by James Mason, a devotee of serial killer Charles Manson whose writings, according to the SPLC, “preach the praxis of leaderless, cell-structured terrorism and white revolution.”

On Gab, where most of the podcast hosts are forced to congregate, they exhort their followers to read SIEGE, post scores of memes about Dylann Roof, and refer to themselves as the “Bowlwaffen” or “Bowl Patrol”:

Nehlen appeared completely at ease speaking with the Bowlcast panel, billed as Vic Mackey, Tactical Bowlcut, HuWhiteTrash, and Illegal Aryan — better known as Mark Daniel Reardon, who allegedly fled the country after he was unmasked by Philly Antifa — in spite of, or perhaps because of, their casual anti-Semitism.

During the show, Nehlen recounted his decision to compile a list of his Jewish critics — which included their photos and Stars of David superimposed over them. “It turned out, out of those 81 people in one month who attacked me — verified Twitter users — 74 of them were Jewish,” he told the panel. Vic Mackey replied that his Jewish critics were “not people.”

Of course several of those critics were mislabeled, and the reason so many Jewish critics were calling him out was because of his increasingly blatant anti-Semitism. Is it any mystery, then, why prominent Jews criticized him for putting (((echoes))) around peoples’ names and telling American Jews to “self deport”?

But to Nehlen this was evidence that he was being maligned by a Jewish hivemind of sorts. One that was part of a “group evolutionary strategy,” in the words of Culture of Critique author Kevin MacDonald, who would go on to serve as his campaign spokesman.

When one panelist said Jews “have a high verbal IQ, I assure you,” Nehlen pushed back. “I don’t buy into that either, by the way,” he said. “I don’t buy into that — they’re that smart. I really enjoyed Kevin MacDonald’s book. I believe what he wrote in there, that they have a group evolutionary strategy to keep their race pure as it were.” However he remained skeptical of the “high verbal IQ piece” of MacDonald’s argument.

The rest of the hosts proceeded to crack jokes about Jewish power while speaking in a nasally whine — somehow managing to do worse impressions than the Daily Shoah crew.

“And that’s the thing, too, preventing the genocide of your own race and building walls and stopping mass immigration — well, you see, it’s for me not for thee, goyim,” said one. “Even if that means thousands of Americans have to give up their lives for God’s chosen people,” replied another. “And their foreskins! Yummy!” said a third voice, causing Nehlen to chuckle.

The podcast was punctuated by a short break in which Edmund Kempbowl III — a shout-out to “Co-Ed Killer” Edmund Kemper — told a bizarre story about raping Jewish women and killing their children. After they returned they directed their vitriol at President Trump’s Twitter proclamation for Holocaust Remembrance Day.

Nehlen said he “would’ve been fine to go to sleep not knowing that that tweet was made,” but was especially outraged by Trump’s Easter proclamation:

The belief that the Jews bear collective guilt for the murder of Jesus Christ — referred to as the deicide myth — inspired murderous pograms against the Jewish people, who were often demonized as “Christ killers.” In the 1960s under Vatican II, the Catholic Church formally renounced this myth once and for all. In 2011 then-Pope Benedict XVI reiterated that the Jews bore no responsibility for the death of Jesus.

So, if you’re going to bring up the Jews on Easter, it ought to be in the context of: They murdered our Lord and Savior, and they begged for Barabbas — they were given the option of taking Jesus or a murderer. And they said, “We want the murderer!” And they got the murderer and Christ went to the cross for us.

He then boasted that he was making a point to show people a pseudo-documentary called Marching to Zion. The movie was produced by notoriously anti-Semitic and homophobic pastor Steven L. Anderson of Tempe, AZ’s Faithful Word Baptist Church, which was designated a hate group by the SPLC.

It seems that when Anderson isn’t shrieking about the need to put “Sodomites” to death, he’s preaching against the Jews, whom he denounces as “racists” and “Antichrists” in his amateur film. Unsurprisingly, Anderson now dabbles in Holocaust denial and is so extreme that he’s been banned from Jamaica and South Africa.

But Nehlen feels the professional hatemonger’s movie is just what people need to wake up to the “Jewish Question.” According to Nehlen, he has “hundreds and hundreds and hundreds, maybe thousands” of people who he’s “shown the Marching to Zion video to,” and these people are, in turn, showing it to others.

“So we’re playing the telephone game with Marching to Zion right now,” he boasted before his audio briefly cut out. “Doesn’t get any better than that because that is what’s going to break the trance of these Evangelicals here in this country who have been on the Kool-Aid of the Jews are our kissing cousins.”