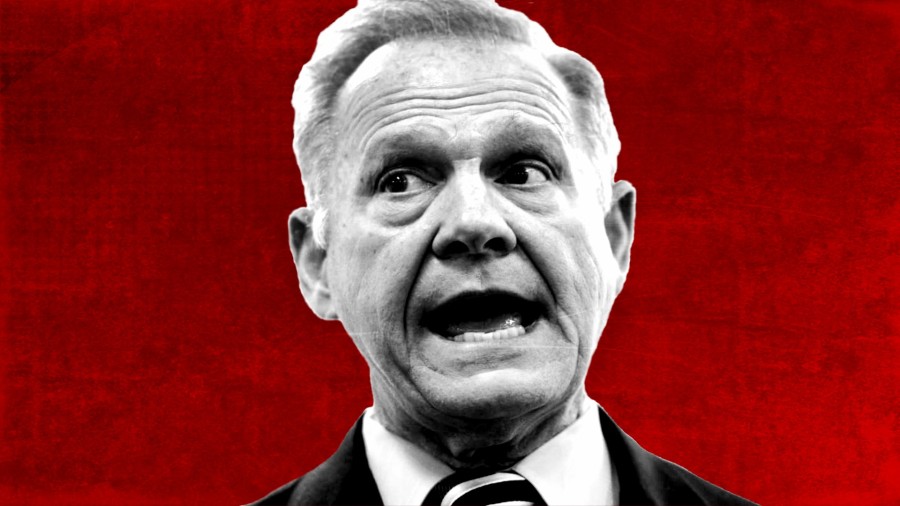 Yesterday the number of women who have accused Alabama senate candidate Roy Moore of sexual misconduct rose to five. According to an explosive report by the Washington Post, Leigh Corfman alleges that she was 14 when Moore, then a 32-year-old assistant district attorney, sexually assaulted her.

On that occasion, Moore drove Corfman 30 minutes out of the way to his house in the woods, where he stripped off their clothes and “guided her hand to touch him over his underwear.” In addition, the Post revealed that three other women said Moore “pursued them when they were between the ages of 16 and 18 and he was in his early 30s.”

The fallout from this article alone was damaging enough, but a former colleague of Moore’s told CNN that it was “common knowledge” that Moore “dated high school girls” while he was in his 30s.

And today, another woman stepped forward to accuse Moore of assaulting her when she was 16, and the details were horrifying. “I tried fighting him off, while yelling at him to stop, but instead of stopping, he began squeezing my neck, attempting to force my head onto his crotch,” she said. After the incident Moore warned her that no one would believe her.

And although Moore denied ever having met this latest accuser, she kept her high school yearbook in which the district attorney wrote, “To a sweeter more beautiful girl I could not say Merry Christmas. Christmas 1977. Love, Roy Moore… Roy Moore, DA.” The allegations have prompted several top Republicans to call for Moore to drop out of the race, or even contemplate expelling Moore from the Senate if he wins.

To many, Moore is just the latest in a series of abusers whose crimes have caught up with them, from Harvey Weinstein to Louis C.K. to Kevin Spacey. To alt-right co-hosts Jazzhands McFeels and Marcus Halberstram of Fash the Nation, it’s just another conspiracy by the GOP establishment to stop a far-right outsider candidate.

McFeels and Halberstram endorsed Moore’s candidacy on a previous episode, making it clear that while they would have preferred Rep. Mo Brooks, Moore is an acceptable substitute. Halberstram compared Moore to the Tasmanian Devil, and called him “these Congresscritters’ ultimate punishment for all the years of fucking up.”

On the November 11, 2017 episode of Fash the Nation they made it clear that they were standing by their man. “Of course in the Democratic mind and the establishment cuckservative mind, it’s ‘Oh boy, we won in Virginia. This is good for Virginia but we have this other race looming on the horizon. We need to do something about this,'” McFeels said.

“And of course, like clockwork, four women have accused Roy Moore of sexual misconduct.”

Halberstram dismissed these accusations as “awfully convenient” and added that these incidents took place “way far in the past.” McFeels said that “a lot of these people are not very credible,” especially Leah Corfman, whom he speculated is “potentially a member of the tribe” — i.e., Jewish.

And he parroted a line of attack from Breitbart.com that one of the accusers, Deborah Gibson, is a Democrat — a flimsy attack given that at least two of the five accusers are Republicans who voted for Donald Trump in 2016. In other words, this is not a political attack.

“And there are some reports out there like ‘big if true’ reports that journalists are offering people money to come forward,” he continued, “And this is the old drag-the-hundred-dollar-bill-through-the-trailer-park routine, right?”

Actually no, the claim that the Post is paying people to level accusations against Moore is not true. In fact, it’s a hoax that started with an anonymous Twitter account known for pushing unsubstantiated conspiracies. Yesterday that Twitter account, @umpire43, deleted all of its tweets.

Halberstram then remarked that while he cannot call these claims “categorically false,” the accusers are “just not believable.” “No, dude, it’s not believable at all, and it’s like this is, what, forty years?” McFeels asked. “Forty years almost, that these women have been quiet, and this guy Roy Moore has run multiple, hotly-contested elections in Alabama?”

Of course this talking point doesn’t do anything to discredit these women’s claims, and in fact reinforces the fact that they aren’t making accusations in order to become famous. Had it not been for investigative reporters from The Washington Post, these women would not have come forward.

Additionally, in order to dismiss these accusations one would have to ignore the fact that their accounts were contemporaneously corroborated by their friends, the remarks by Moore’s colleagues about his propensity for dating young girls, and the widespread knowledge that Moore was kicked out of business establishments (including the YMCA) for this creepy, predatory behavior.

If Moore manages to get seated in the U.S. Senate, it’ll be because people like McFeels and Halberstram propelled him there.