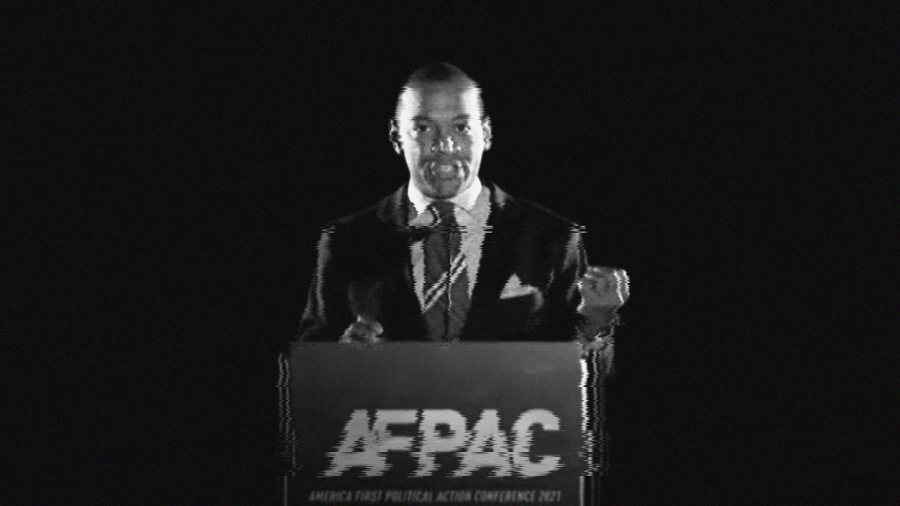 Miller addressed the audience by telling them that they needed “to launch the [‘America First’] movement into the mainstream,” and therefore needed “someone who’s not gonna just, like, sit on stage and name them.” The audience erupted after hearing this, though Miller said it was a “joke.”

It is unclear to whom Miller was referring when he said “them.”

Miller then lambasted the movement to “destroy America,” as well as “our history” and “our culture.” Miller quoted “legendary” white supremacist author Pat Buchanan who denounced a “counterculture” which had “scarcely left an institution unscarred or an icon unsullied.”

“It’s so true. And it’s the undoing of American history,” Miller said.

“That’s so important to understand,” he continued. “They want to bring this country to the ground. It’s not the cities they want razed, it’s our legacies that your ancestors built.”

After offering up a disingenuous defense of Nick Fuentes’ racist rhetoric — dismissing it as mere “joke[s]” or “offensive” comments — Miller awkwardly addressed the fact that a Black man was giving a speech at AFPAC II.

“And you know, people are like, ‘Well, what is a Black person’s role in the ‘America First’ movement?,'” he said, chuckling. “Well if you wanna be real about it, we’re not a multiethnic country. We’re not. Maybe biracial at best. But they are importing literally hundreds of thousands of people in here to destroy this country and what it stands for and what it means.”

He added that “at least Blacks have great cultural contributions” — specifically “music” and “entertainment.” “I mean when’s the last time you listened to a mariachi band?” he asked.

Prior to his speech at AFPAC II, Miller hosted The White House Brief for BlazeTV, where he attacked immigrants and defended white nationalists.

Miller described VDARE — which has called for a whites-only ethnostate and publishes articles by white supremacists — as a “controversial website that the media has labeled as racist.” He claimed it “opposes mass immigration” and publishes “articles from all different people” including “progressives.” Miller did not name any “progressive” columnists.

“The reason they opened themselves up to being called a white nationalist publication,” he continued, “is because [VDARE founder] Peter Brimelow admits to publishing articles from [American Renaissance founder] Jared Taylor, who is a self-described ‘white advocate’ in the sense that he ‘unashamedly work[s] for their people’ — white people — ‘exactly as La Raza works for Latinos and the Anti-Defamation League works for Jews.”

Miller failed to give any additional background information on either Peter Brimelow or Jared Taylor, despite their histories of overtly racist rhetoric.

Brimelow, for example, said at a white supremacist gathering in 2016, “There is no quote-unquote ‘diverse America.’ There’s only white America.” And Jared Taylor once wrote after Hurricane Katrina, “When blacks are left entirely to their own devices, Western civilization — any kind of civilization — disappears.”

Instead, Miller defended American Renaissance by comparing it to longstanding civil rights organizations.

“Now whatever you may think of Taylor, it is true that whites are the only group of people who are not allowed to have groups that protect the interests of their people,” Miller said. “I mean what about the NAACP? Are they racist? Not from what I hear. What about CAIR? Are they racist? No. Those are all fine and dandy.”

He also claimed that Stephen Miller would not have gone to websites for information on “race and violent crime” statistics if the mainstream media reported on it. “I mean what do you do?” he asked. “What do you do when the mainstream outlets aren’t reporting on the important data about the connection between immigration and race and crime? Because they have an agenda to push that shows immigration is great for crime.”

Since the “mainstream media isn’t willing to put that data out there,” Miller claimed, “you gotta look elsewhere” — including “racially-motivated outlets” like American Renaissance.

In an episode of The White House Brief from January 2020, a few months before his show apparently ended on BlazeTV, Miller defended the Trump administration’s policy of banning immigrants who were considered likely to rely on public benefits. In essence this policy created an additional barrier to low-income immigrants who wanted to enter the U.S.

In Dec. 2020 the so-called “public charge” rule was blocked by the Ninth Circuit Court of Appeals, which rejected the administration’s claim that the policy promoted self-sufficiency.

Miller declared that “Banning people from coming into the country who are reliant on the government means less immigration. And that’s a good thing.” He stressed that he was opposed to all immigration, legal and illegal, claiming that “[w]e have enough people here who are dependent on the government” and “do not need more.”

He then suggested that immigrants who “cost us” and “take from what we’ve earned and worked hard for” should not be allowed to enter the country.

Miller pulled up a chart that purported to show that households headed by immigrants from Central America and Mexico “have by far the highest welfare use.”

“So I’ve got a really elementary question here,” he said. “You know, a stupid question from a stupid xenophobe like me: Based on the sheer numbers, why are we taking in the most immigrants from the country that takes the most from us? If the goal of immigration is to improve the country, to make us better, then why would we do this?“