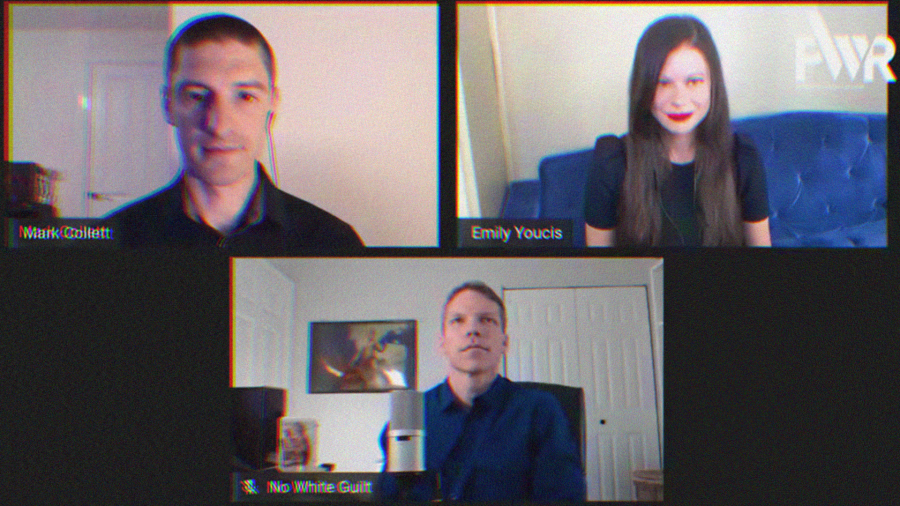 During a recent appearance on a white nationalist YouTube show, Neo-Nazi animator Emily Youcis expressed hope that the protests over the murder of George Floyd would finally “wake up the white race.” Youcis, who once called for the mass slaughter of Africans, also advocated for the creation of a white “ethnostate.”

During the June 4, 2020 episode of Patriotic Weekly Review, a show hosted by white nationalists Mark Collett and Jason Köhne, Youcis was asked for her reaction to white people taking a knee to honor the memory of George Floyd and express solidarity with other demonstrators.

Youcis said it represented the “complete submission of the white race” to Black people. She referred to America as a “racial experiment to — like Babylon — to bring all of the races here,” and said she favored an “all-white America.”

She also alluded to a comment she made in 2018 about using nuclear weapons on Africa.

During a 2018 appearance on The Public Space, a YouTube show hosted by white nationalist Jean-François “J.F.” Gariépy, Youcis said the U.S. should “nuke Africa” and “cut off the food aid.” “And I don’t think that’s genocide,” she told Gariépy. “I think that’s called letting nature run its course.”

Youcis told Collett and Köhne that she “stand[s] by that statement” and has “only become more radicalized over the past two years” since her appearance on The Public Space. She then said that white people have “no choice” but to “band together and rise up,” and that the recent protests are the “best thing that can happen to wake up the white race.”

Later in the show, in response to a viewer question about whether “this huge accelerationism of anti-whiteness” would help the white nationalist cause, Youcis said it would.

She said that “prior to this, the idea of Balkanization or getting our own white ethnostate in the United States seemed like — really seemed like a pipe dream.” Youcis continued by saying the only viable solution to the nation’s problems aside from “extreme violence” — which she has already endorsed — is racial separation.

“And Black people can have their own ethnostate somewhere in the deep South,” she explained. “Let’s give them Alabama and Louisiana. They can have that. I think they can fit in there. Or they can simply go back to Africa! Because, I don’t know why this is such an evil thing to say, that they can go back to Africa.”

Youcis explained that she fears the prospect of Africa’s population “explod[ing]” since African immigrants come to the U.S. “And if 15% of the population is doing 50% [of crimes] here, just imagine when they ship those ‘poor’ African refugees to the United States, and they’re now 40% of the population. Or 50. Or 60,” she said.

Unsurprisingly, Collett and Köhne voluntarily pulled this episode of Patriotic Weekly Review from their YouTube channel. Not because of a fundamental disagreement with anything Youcis said, but rather to prevent their channel from receiving a strike or even getting suspended.