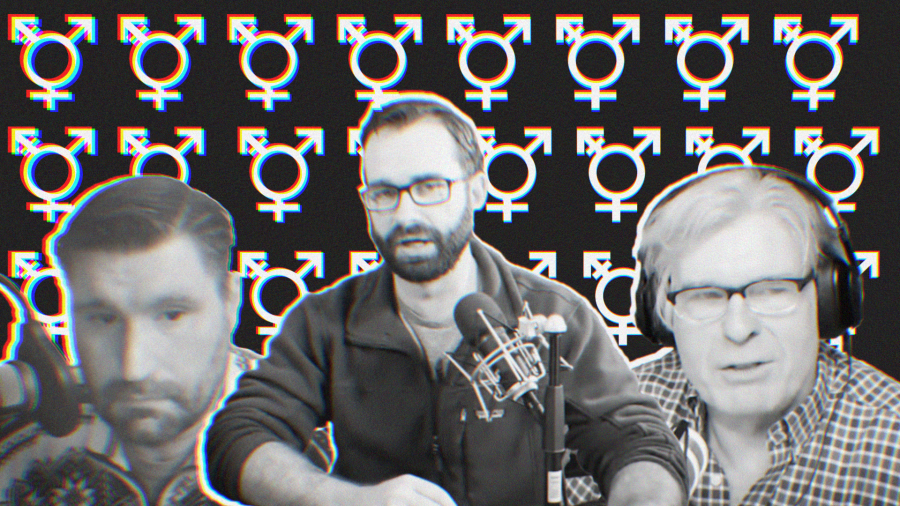 Thanks to a recent Texas custody case, a 7-year-old girl has now become the latest cause célèbre for far-right commentators and websites. The dispute centers around L.Y. — as this article will refer to her — whose parents’ marriage was recently annulled. Since Jeff Younger and Anne Georgulas’ marriage ended, a bitter custody dispute over their twin children has ensued.

L.Y. was given the name “James” and raised as a boy, but was diagnosed at an early age with gender dysphoria. That is, L.Y. experienced distress over the incongruence between her gender identity and her sex assigned at birth. Ann Georgulas was advised by a therapist of the necessary steps to begin “social transitioning” — allowing L.Y. to live as a girl and use a feminine name and pronouns.

Jeff Younger, who also sought custody of L.Y., was opposed to this, and intended to refer to L.Y. as J.Y., dress her in male clothing, cut her hair short, and refer to her by male pronouns.

According to court transcripts from July, evidence presented at trial included testimony from L.Y.’s therapist, teacher, and an investigator with Child Protective Services (CPS), which pointed to the conclusion that L.Y. presented as a girl. According to the CPS report, portions of which were read, L.Y. was “afraid of [her] dad.” Expert testimony on gender dysphoria was also presented.

Days ago a jury made the 11-1 decision to award sole custody of L.Y. and her brother to their mother — until today, that decision was awaiting the judge’s approval. (The Daily Wire reported that the judge ultimately granted joint conservatorship to the parents — meaning Jeff Younger has a say in L.Y.’s medical decisions — but put a gag order on Jeff, preventing him from further discussion of the case.)

Before the case’s resolution, Jeff engaged in a social media blitz in an effort to gin up support for his decision to raise L.Y. as a boy. On a website set up by Jeff, or someone close to him, Jeff has been soliciting donations, hawking T-shirts, and telling his version of “James’ Story.” Among other things, Jeff accuses his ex-wife of manipulation and “serious post-partem depression.”

The website’s FAQ states that Jeff “opposes (1) transgender child abuse, the imposition [of] abnormal gender identities on children; (2) irreversible chemical castration hormone treatments; (3) sex-change surgeries on minors; and (4) the application of child-support to any of the above.” It also accuses Anne of wanting L.Y. to “live a life of perversion, banishment, and despair.”

This narrative — that a female gender identity was forced on a child by a vindictive mother, and that L.Y. would undergo “irreversible chemical castration hormone treatments” and surgery — has no basis in fact, but has been seized upon by far-right extremists, including white supremacist activists, seeking to push an anti-LGBTQ agenda.

On October 22, the hashtag #ProtectJamesYounger was trending on Twitter thanks to the efforts of conservative social media figures.

Ashley St. Clair, an ex-“brand ambassador” for the right-wing youth organization Turning Point USA, tagged the presiding judge in a tweet, and falsely claimed the judge was “ruling to allow a FORCED sex change of a seven year old boy.” The next day St. Clair claimed the judge had blocked her on Twitter, and angrily tweeted, “Don’t hide like a coward from your decision to force a 7 year old boy to transition to a girl!”

In an October 22 article for The Daily Wire — itself a hotbed of bigotry against women and LGBTQ people — Matt Walsh wrote that Anne Georgulas will “chemically castrate” L.Y., and that there “is nothing his father can do to stop it, short of ‘kidnapping’ the boy and fleeing the country (a move that would be not only morally justified, but heroic).”

Earlier this year Walsh melted down on Twitter over the use of the word “cisgender,” which, he insisted, is “made up gibberish.”

In an unhinged piece for The American Conservative, Rod Dreher called L.Y. a “woke Edgardo Mortara.” Mortara was a Jewish child living in Bologna who underwent an “emergency baptism” after falling ill and, because the law required Christian children to receive a Christian education, was kidnapped in 1858 by the Vatican and raised by Pope Pius IX.

Dreher wrote that the case “looks like a vengeful ex-wife using her son to wreak revenge on her ex-husband.” He said that this “shocking, scandalous, anti-family ruling did not happen in Massachusetts or California; it happened in Texas,” and that the “ideology that is taking over our country is destroying the family and even destroying the very concepts of male and female.”

At the end of the article, Dreher cited two tweets from white nationalist Steve Sailer. In an article for the anti-immigrant website VDARE, founded by white nationalist Peter Brimelow, Sailer called it a case of Munchausen syndrome by proxy — a mental illness in which a “caretaker of a child, most often a mother, either makes up fake symptoms or causes real symptoms to make it look like the child is sick.”

Texas governor Greg Abbott, true to form, tweeted that “the matter of 7 year old James Younger is being looked into by the Texas Attorney General’s Office and the Texas Department of Family and Protective Services.” The official Twitter account for VDARE retweeted Abbott and included the message “Thank you, Governor.”

The Twitter account for the Legion of St. Ambrose, a white supremacist organization formed by ex-members of the defunct Traditionalist Worker Party, referred to mainstream conservatives as “wolves in sheep’s clothing” and accused the GOP of “willingly fail[ing] its Christian voters.” It ended the tweet with the hashtag #ProtectJamesYounger. 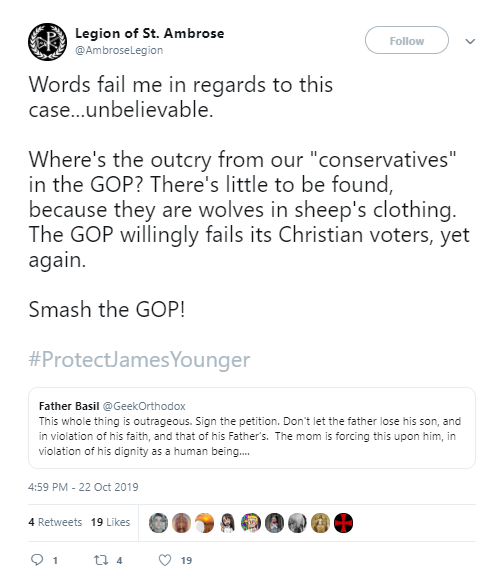 On the October 23 episode of the white supremacist podcast The Daily Shoah, co-host Jesse Dunstan falsely asserted that “it was a judge that said that little boy should be turned into a woman and castrated.” Co-host Mike “Enoch” Peinovich called the judge a “frizzy haired mulatto,” and claimed that living in a democracy means “more and more homosexual degeneracy, weird stuff.”

Peinovich claimed that the “only people that are defending this are men that are pretending to be women themselves” and “really weird feminist broads.”

Addressing conservatives he went on to say, “[Y]ou fucking hate Nazis so much, well you know what Nazis did, literally when they came into power one of the first things they did? They burned down Magnus Hirschfeld’s Institute for Sexual Research which from 1919 to 1933 had been conducting these kind of experiments on people.”

Of course in spite of the repeated claims of castration and mutilation, in reality no such thing is happening to L.Y.

As pointed out in a Washington Post article, medical intervention would not be taking place this early in L.Y.’s life. According to Laura Edwards-Leeper, a clinical psychologist at Pacific University, at 10 to 13 years old the child may, with the help of health professionals, take puberty blockers which delay the development of secondary sex characteristics such as breasts and facial hair.

This would be entirely reversible, however, and once the use of puberty blockers cease, puberty continues as normal.

Endocrine Society guidelines state that puberty blockers should be given until age 16, followed by cross sex hormones in a closely monitored process that includes a mental health specialist. The average age for gender-reassignment surgery, it states, is around 20.7 years old, and those who perform it do so on patients who are at least 18.

In other words, L.Y. is not in danger of irreversible medical changes at age 7, in spite of the hysteria that has been whipped up by the far-right.