During the June 21, 2019 episode of their Flashback Friday series, Red Ice hosts Henrik Palmgren and Lana Lokteff discussed the Midsummer festivities in Sweden — and made it clear that they were less than pleased with the upcoming horror movie Midsommar by Hereditary director Ari Aster. Midsummer is a celebration with “roots in a pre-Christian solstice festival” where people engage in activities like dancing around the Midsummer pole.

Lokteff called the movie “another attack on a ancient, beautiful European tradition” and said Midsummer “has nothing to do with Satanism.” (The trailer for the movie does not explicitly show any Satanic themes.) Palmgren said “it’s clearly a hate movie” as well as an example of “racial discrimination against people of — especially Nordic heritage, but white people in general.”

This wasn’t the first time the alt-right duo denounced the movie either. In the March 8, 2019 episode of Flashback Friday they devoted an entire segment to making antisemitic complaints about it.

Palmgren pulled up an article about Midsommar from the A.V. Club called “Allow the first Midsommar trailer to lower your defenses,” and seemed very confused about what that meant. “Lower your defenses, like let the propaganda in,” he said, unaware that it was likely referring to lowering one’s defenses before something frightening happens in the movie. He began reading from the article, saying Ari Aster’s name with the same intonation as the antisemitic echo meme.

“It’s obviously complete religious and racial intolerance,” Palmgren complained. “That’s basically what it is. And why do I say that? Well let’s just do the ones that we always do when we flip it and we turn it on its head and we say if it was done by different groups would it have been accepted?” He compared it to a hypothetical situation in which a blonde-haired, blue-eyed filmmaker made a horror movie set in Israel where white people were murdered by Jews.

Of course, judging from the trailer, the protagonists are a white couple from America — played by Florence Pugh and Jack Reynor. But Palmgren incorrectly insisted that the antagonists in Midsommar were specifically targeting a black character played by William Jackson Harper of The Good Place. Palmgren compared the movie to Get Out, and Lokteff said Harper was “part of that” movie. He was not.

Palmgren continued to insist that there would be an international outcry if a horror movie depicted Orthodox Jews sacrificing white Christians — although that would probably be due to the fact that this was a centuries old antisemitic trope used to fuel pograms against the Jewish people. “So why is this not anti-Scandinavian or anti-white or anti-European?” Palmgren asked.

He later claimed that the way Swedes are depicted in Midsommar rivals Nazi caricatures of the Jews. “I think that the Jewish stereotypes in like Der Stürmer or something was never even remotely this bad,” Palmgren whined. The cartoons published in Der Stürmer depicted Jews as rodents to be exterminated, as murderers of Jesus Christ, as spiders and worms, and as defilers of white, German women. The newspaper’s founder, Julius Streicher, was convicted of crimes against humanity and executed in 1946.

And on Twitter, Palmgren complained about emojis made specifically for the movie. He complained that there was no emoji for the Midsummer pole while one exists for this “anti-white movie.” He wrote that it is “full of racial hate & disgusting portrayals of Scandinavians & Nordic people,” and added that there would have been outrage if it depicted “Asians, Africans, Aborigines, Arabs, Eskimos, Inuits or ANY other group” that way. 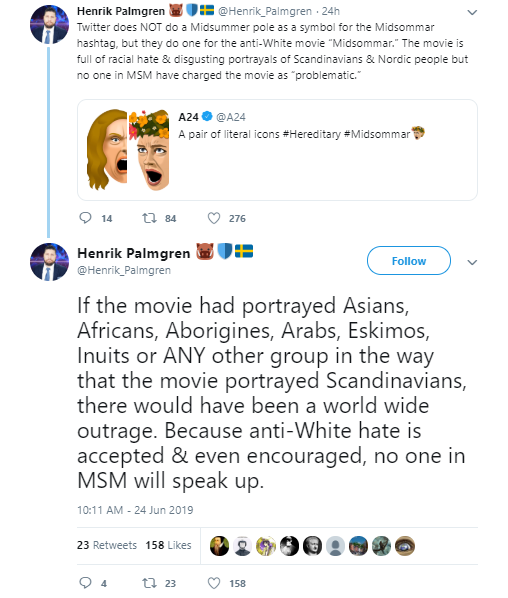 Of course Palmgren and Lokteff didn’t care much about Jewish caricatures when they invited Andrew Anglin on their program on more than one occasion. Anglin founded The Daily Stormer, a website inspired by Der Stürmer which prominently features racist depictions of Jews and non-whites. They also didn’t mind mocking the movie Black Panther in 2018 by referencing the racist “We Wuz Kangz” meme.

Comments under the video displayed a similar lack of racial and religious sensitivity. One commenter wrote “It’s a jew [sic] war against white people, its [sic] called the kalergi plan.” “(((They))) are angry that we know the truth about (((them))),” wrote another. One suggested violent retribution, writing, “I can’t watch this without my hate growing within me. When do we just do away with these people that are waging war against us?”

The following clips are from a two hour and ten minute livestream: