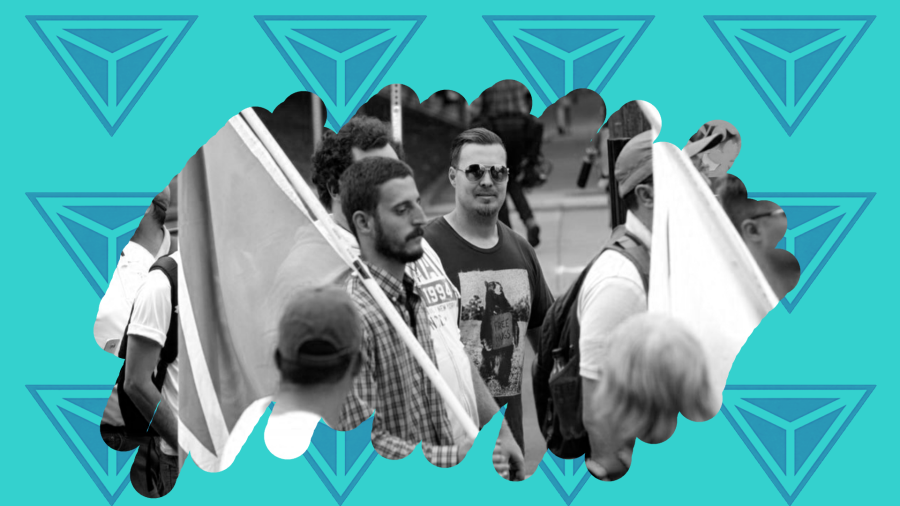 On October 19, 2017, a man boarded an Amtrak train in California, intent on sabotaging it. Taylor Wilson, a 26-year-old white man from St. Charles, made his way to a secure area, and successfully disabled the train and cut the lights to the passenger compartments as it approached Furnas County, NE on October 22, 2017.

When Amtrak personnel confronted him, Wilson shouted “I’m the conductor now, bitch!” By the time Wilson was apprehended, panic had already spread throughout the train. Some of the 175 panicked and confused passengers tried to escape through its windows. Luckily, none of them were injured.

It was later discovered that Wilson had been carrying a mask, a hammer, a knife, a loaded gun and a box of ammunition, and a business card for the National Socialist Movement (NSM). He was also reportedly high on acid, and authorities say he brought the train to a sudden halt in order to “save it from black people.”

Wilson was charged with two counts of terrorism against a mass transportation system, and was scheduled to stand trial on June 11, 2018. Had he been convicted, he could have faced life in prison. Instead, Wilson changed his plea to “guilty,” and received a sentence of 14 years.

U.S. District Judge John Gerrard called Wilson a “gun-toting, angry, at times incoherent and other times uncooperative white supremacist.” He added that Wilson “can either renounce the white supremacist nonsense that you’ve been fed and go back to the way you were raised as a young man,” or “coddle up to plenty of other white nationalists that you will find incarcerated.”

Wilson was one of many white supremacists and Neo-Nazis who attended the 2017 “Unite the Right” rally in Charlottesville, VA. While there, Taylor could clearly be seen marching alongside other IE members and carrying a flag with the group’s insignia — a white and turquoise “Dragon’s Eye”: 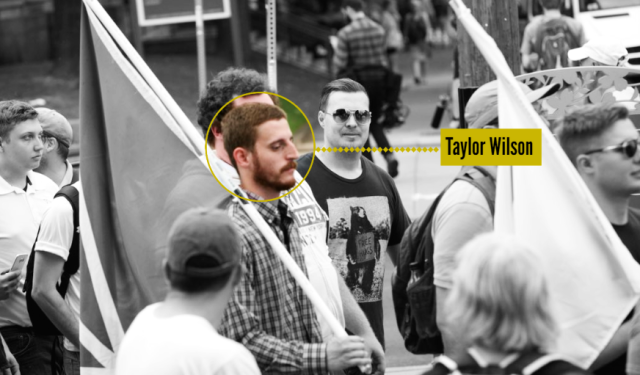 In a deleted Instagram post, white supremacist and IE member Clark Canepa can be seen posing in Charlottesville with both Wilson and white nationalist Faith Goldy. The caption reads “It was a weekend for the books with the St. Louis goys”: 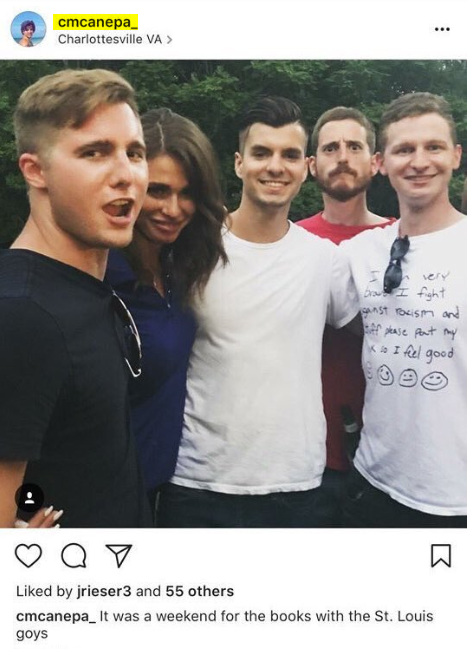 At one point Wilson was spotted marching next to alt-right killer James Fields, as well as white supremacists associated with The Right Stuff and its flagship podcast The Daily Shoah:

A search of Wilson’s cell phone further turned up photos and videos of an alt-right banner drop from Ferguson, MO. The banner read “‘HANDS UP DON’T SHOOT’ IS ANTI-WHITE FAKE NEWS/ALT-RIGHT.” According to Anti-Fascist Action Nebraska, photos of the banner were also posted on a pair of Twitter accounts: @AltRightSTL and @JohnathonMcste1.

The @JohnathonMcste1 account used the hashtags #altright, #mikebrown, and #Identityevropa. Prior to the account’s suspension, it had suspiciously stopped tweeting the day before Wilson’s arrest. The @AltRightSTL account’s last tweet was December 8, 2017 — three days after Wilson’s hidden weapons cache was discovered by the FBI.

Of course Wilson’s ties to IE are deeper than just him brandishing their flag, associating with their members in Charlottesville, and possessing photos of a possible IE event. Wilson was also a member of alt-right Discord servers, where he posted messages under the name Keksmix. One of the two servers Wilson was most active in was moderated by TexasVet (real name Sean Sweat), an IE member.

On the tradworker server, which saw the likes of “Illegal Aryan” and Matthew Heimbach, Wilson posted messages about how white people are the “only humans” and sang the praises of Nazism. “Isnt [sic] National Socialism great!” Wilson wrote in a May 23, 2017 post. In another he advocated murdering people with disabilities, asking whether they “cremate the cripples on Wednesdays or Thursdays.”

Like Wilson, Sweat was a member of the tradworker server. It was there that he admitted to being a member of IE, telling other anonymous white supremacists in May 2017 that he “joined Identity Evropa looking for a large organization but I found a home in a much smaller community that fit my ideals better.” He added that IE “is on the same page as us.”

In the Anticom server, he made a similar comment. Sweat wrote, “I recently joined Identity Evropa and I have to say I am impressed with them. Pretty high speed group. They raised enough money to buy uniforms and armor for the 50 ‘Guardians.'” He also boasted that IE is “the Alt Rights ‘elite’ group.”

In the Ethnoserver, which was moderated by several people including Sweat, white supremacists were complaining that, following “Unite the Right,” several alt-right servers were at risk of being shut down. The main alt-right server, 14words, had already been taken offline. Thule-Gesellschaft wrote that “we can expect the kikes and their assets to do far worse than this in the coming years.”

One member of the Ethnoserver named Rotmistrz responded to Heather Heyer’s murder with “lmao fat 32 year old slut,” and complained that “[we’re] all getting shoahd.” Elf, a moderator, called Heyer a “morbidly obese 22-year-old dyke with no kids and a fettish [sic] for black men.” Another moderator, Fashy Man About Town, told elf to “get the AK47.”

While these and other white supremacists reveled in their acts of bloodshed and terrorism in Charlottesville, Sweat was present and ready to vet people. “Welcome to all the new and old names,” he wrote on August 15, 2017. “You may PM me when you are ready to get vetted.”

Several from the defunct 14words server were eager to become part of the Ethnoserver. Elf told one that they “need someone to vouch for you. Probably @TexasVet.” Sweat explained that while the people from the 14words server had previously been vetted, they would have to be vetted once again since the new process was “stricter than wwhat [sic] we had.”

Following that they would undergo “Extreme Vetting” and be asked a series of questions. Fashy Man About Town wrote that “14 Words Members will be confirmed by TexasVet will be given verified status. We will get to all of you.” He later added that they “have all the best mods from the old server.”

On August 16, 2017, a bot called Komissar Jr posted a message welcoming Taylor Wilson to the Ethnoserver, and gave him a list of instructions for vetting:

Shortly after Komissar Jr wrote “HEIL, @keksmix!”, Sweat made fun of Wilson for misspelling “Sieg” and joked that this was a bannable offense:

Wilson then made his way to the interview. While it is unknown exactly what questions Sweat asked of Wilson, evidently Wilson’s endorsement of Nazism and violent rhetoric were not viewed as disqualifying. None of the moderators mentioned whether a prospective member’s criminal history would be taken into account either.

If Wilson had been asked, perhaps they would have learned that he had been involved in a road rage incident in 2016 in which he allegedly pointed a gun at a black woman. Although it is doubtful that this would have made a difference either.

For all IE’s attempts to present itself as the well-dressed and clean-cut face of white supremacy in America, the organization is anything but. Its founder, Nathan Damigo, is a former Marine corporal who was deployed to Iraq for two combat tours. One night after he returned home, Damigo — after drinking heavily — robbed a cab driver at gunpoint and stole $43.

While in prison Damigo read My Awakening by ex-Klan leader David Duke, and became inspired to create his own white supremacist organization. During the 2017 “Battle of Berkley” Damigo gained a level of infamy after he was filmed punching a female protester in the face.

Following “Unite the Right” Damigo stepped down from his role as leader of IE, and turned over the reins to Eli Mosley, whose real name is Elliott Kline. Mosley, like Wilson and Sweat, was a member of the Ethnoserver, as well as several other white supremacist Discord servers. In the Vibrant Diversity server, Mosley posted a picture of a sword-wielding Celtic warrior. Of the sword Mosley said: “I’ll kill a thousand Mud’s with that.”

It wasn’t the first time Mosley had spoken approvingly about murdering black and brown people. During an appearance on The War Room, an alt-right podcast, Mosley boasted of being an HR person who fired “niggers and spics all day.” He also bragged to the show’s hosts of having gunned down Arabs during a combat tour in Iraq:

Before that I was in the army and I got to kill Muslims for fun. I’m not sure which one was better, watching niggers and spics cry they can’t feed their little mud children or watching Muslims’ brains sprayed on the wall. Honestly both probably suck compared to listening to a kike scream [in the] oven.

Mosley’s tenure as leader of IE lasted a mere three months, however. He would be replaced by Patrick Casey, a diminutive white supremacist who worked for Red Ice TV under the moniker Reinhard Wolff.

After Mosley had already exited IE news broke that he had fabricated stories about his military service. A New York Times investigation found that, despite Mosley’s claims, he never once served in Iraq. In fact, his unit in the Pennsylvania National Guard had never deployed anywhere in the six years he served. This act of stolen valor was the last straw for comrades like Richard Spencer, who permanently severed ties with him.

IE’s defenders might point out that Mosley is a liar, not a murderer, but that isn’t the point. When Mosley was accepted into IE as a full-fledged member and spokesman, Nathan Damigo not only knew about Mosley’s claims — he believed them. He was promoted to IE’s leadership by people who believed he served in Iraq and slaughtered Arabs “for fun.” They accepted him because of this belief, not in spite of it.

Under Patrick Casey’s leadership IE has been concentrating on activism (dropping banners with xenophobic slogans and staging “die-ins” to protest “white genocide”), its podcast Identitarian Action, and cheap PR stunts like handing out Christmas cards and donations to the homeless: 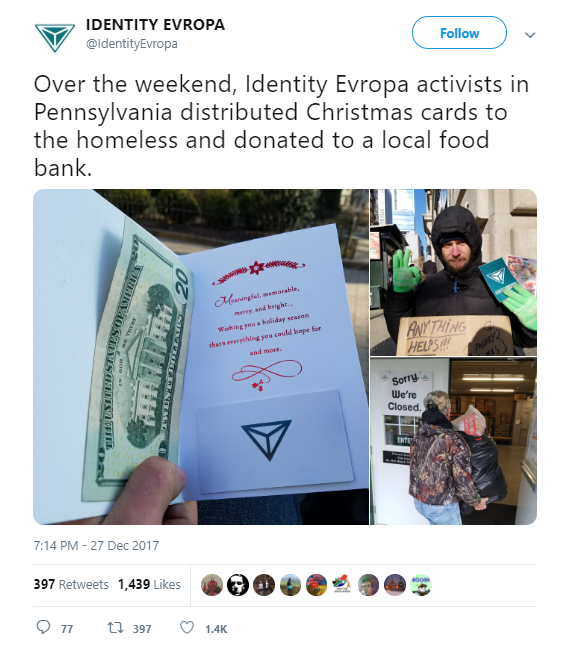 But small, token acts of kindness cannot make up for the fact that IE is an organization that attracts broken, violent, and oftentimes drug-addled men like Taylor Wilson, or criminals like Nathan Damigo. Members of IE, like any white supremacist organization, are a powder keg waiting to go off.

Mainstream media outlets should stop giving Identity Evropa free publicity, and start recognizing the group for what it really is: a breeding ground for hateful extremists and terrorists. We were fortunate that Wilson didn’t injure or kill any Amtrak passengers when he tried to “save” the train from black people. The next time we might not be so lucky.