On yesterday’s episode of Happy Homelands, an online show hosted by “Smiling Nationalist” Paul Ramsey, white nationalist Jared Taylor admitted he’s not a strong believer in democracy, and would actually prefer it if we put some very familiar restrictions on the franchise.

Taylor told Ramsey that he believes the right to vote should be “sharply limited,” and that voters in a representative democracy should have “very specific qualifications.” For example, a “test of history or a test of understanding of economics” — for all intents and purposes a literary test which would be banned under the Voting Rights Act.

He also floated the idea of bringing back “property qualifications” which would similarly favor older white Americans.

He said that this would mean the only people who could vote would be people who had a stake in how the country was run in the first place — which would technically be everyone but not to Jared Taylor. To him it would be like the shareholders of a company: those with the largest share have the most say in how it’s governed.

Or we could just have an outright aristocracy. “You could argue, I think, that 19th century Britain was governed in a very, very good way,” he said. “There was a certain amount of polling, there was parliament — but there were people who felt that they had a proprietary interest in the country. They were owners rather than renters.” (I’m guessing Jared thinks he’s one of the owners.)

Given Taylor’s tendency to look down on common voters and dismiss “one man, one vote” as “crazy,” it makes him a lot less sympathetic when he brings up some bad news about his lawsuit against Twitter. If you don’t recall, both Taylor’s personal Twitter account and that of his publication American Renaissance were banned for violating terms of service.

In February Taylor announced he was suing Twitter with the help of Marc Randazza — an attorney with an affinity for helping white nationalists and Neo-Nazis in court — to force Twitter to host his racist content. Per Taylor’s amended complaint, his claims against the social media giant included violations of the California Constitution, the Unruh Civil Rights Act, and the Unfair Competition Law.

In June Taylor was crowing about a decision by San Francisco Superior Court Judge Harold Kahn which allowed their case to proceed — at least with regard to their claim under California’s Unfair Competition Law. On Gab, the American Renaissance account quickly declared victory after passing this first legal hurdle:

Naturally this was the top reply: 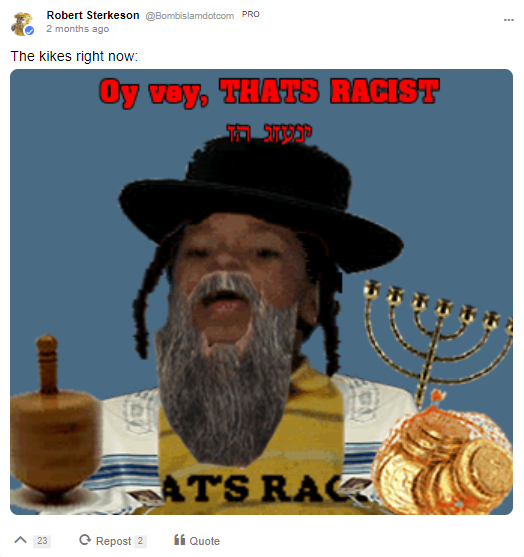 Yet when he was asked by Ramsey about the status of his lawsuit, Taylor indicated that these celebrations were premature to say the least. “We just got an unfortunate ruling that we’re digesting that came down yesterday,” he said.

“And the California appellate court has decided that the judge that ordered our case to proceed against Twitter’s objections has made a mistake. And depending on how this ruling comes down, it could be the end of the lawsuit.”

He said this is “not necessarily the case” and that his “lawyers are puzzling over this right now,” but that the decision he just received was “not at all favorable.” He spoke about possibly appealing the ruling, but declined to offer more information on the grounds that his lawyers “are still sort of puzzling over what this actually means in terms of the strategy of the case.”