As news broke that 12 Russian agents had been indicted pursuant to Robert Mueller’s probe of interference in the 2016 election, one pro-Russian “citizen journalist” appeared on a popular white supremacist podcast. In the 132nd episode of Fash the Nation, Russia Insider founder Charles Bausman sat down for an interview with hosts Jazzhands McFeels and Marcus Halberstram.

McFeels, who routinely slurs immigrants, African-Americans, and sexual assault victims, said they’ve “been wanting to have” Bausman as a guest for some time now. Bausman, in turn, complimented McFeels and Halberstram, saying “we’re big fans of what you do, so I’m very happy to be here.” In fact, Bausman said, “your show was very, very helpful to us in 2016 when we were trying to dissect and figure out what was going on with Trump, and why was he talking about Russia so much.”

While most pundits from both sides of the aisle criticized Trump for showing too much deference to Putin during their Helsinki summit — effectively siding with him over U.S. intelligence on the question of Russia’s election meddling — McFeels, Halberstram, and Bausman were thrilled that the U.S. was forming a friendship with the “other largest white country on the planet”:

McFeels: And you can only call everyone who counters their narrative a crazy, right-wing conspiracy theorist for so long before all the facts and data and evidence start to conform to the counter-narrative. And that’s what’s happening, and the more that happens the harder they have to censor, the harder they have to step down on the truth, and you read some of these articles this week that are published about Russia. They’re trying so hard to hone this narrative: Trump’s embrace of a longtime U.S. enemy.

I mean they’re just, they’re trying so hard to do this and you have the MSNBC contributor who referred to Trump’s comments as being tantamount to Kristallnacht. They called it Pearl Harbor. I mean the rhetoric, the level of rhetoric that they have stepped up to describe this historic event is just insane. And the question I’ve been asking myself all week is, “Where does it go from here?” I mean you have people calling for coups as Halberstram said at the beginning. And over what? A friendship with the other largest white country on the planet? I can see why they might have a problem with that, right?

Halberstram: Yeah, that’s exactly the problem. And you — I think I maybe saw this on your [Jazzhands’] Twitter timeline, but some people are starting to comprehend what potentially this is really about: the nature of Russia, nationalism, the affinity that perhaps Trump and certainly people like us have for Eastern Europe. They’re starting to figure out that this is really a natural alliance in the face of their machine.

Bausman: Yeah, and you know the fact of the matter is is that the U.S. and Russia really need each other, need to cooperate on some very important things. And Trump recognizes that and he knows he’s not gonna get a lot of the things he wants unless he’s able to negotiate with Russia. So he’s gotta be able to sit down and talk with them. It’s just basic.

Later on in the episode McFeels said, “Well our American media’s referring to this great uprising as ‘global white supremacy’ and ‘solidaristic white nationalism,’ so by all means let’s proceed as planned, right?”

It wasn’t the first time Bausman appeared on a white supremacist media outlet. In March, Bausman appeared on Radio 3Fourteen, a show hosted by white nationalist Lana Lokteff. Bausman boasted that “Russia is the only major European country whose media is not controlled by Jewish interests.” And Lokteff praised Vladimir Putin’s “family policy,” which is designed to increase Russian birthrates.

She also lauded the nation’s racial homogeneity, claiming that in Russia “they don’t get the propaganda of like, ‘Oh, mix yourself out! Have Asian babies!’ or something,” and that “in Sweden, in Germany they’re being encouraged to have babies that aren’t Swedish and German anymore.” Bausman smiled and said that’s “definitely not happening” in Russia, and “it’s not gonna happen.” He said Russians are “very nationalistic about Russians as a race and as an ethnicity.”

Of course Bausman’s racism and anti-Semitism aren’t limited to these few media appearances. In an article he authored for Russia Insider early this year, Bausman argued that people ought to be able to criticize the Jews as a racial group, without the need for euphemisms like “neocons,” “globalists,” the “deep state,” etc. “[N]one of these terms work, do they?” he lamented. “They all obscure the issue, actually enhancing the taboo’s inherent deceit.”

Regardless of whether they are conservative or liberal, where they are from, or whether they’re Zionists or not, “the only trait that these people have in common is their Jewish heritage.” He asserted that “the unreasonable hostility towards Putin’s Russia, particularly coming from the US and the UK, is very much a Jewish phenomenon, and has been for centuries,” and that the “most vitriolic and obsessive Russia-bashing journalists in the media are mostly Jewish.”

He even had some praise for white nationalists:

The Alt-Right is helpful in understanding Russia, because it has intellectual heft, and produces a lot of good writing about Russia and Russian relations, much of which is spot-on. We follow the Alt-Right media and republish the occasional article, and they are invariably very popular on Russia Insider – largely, I think, because they are offering a fresh point of view, and talking about vitally important issues others refuse to address.

Pointing out the pernicious effects of the influence of certain Jewish elites on many aspects of American and European society and politics, as the Alt-Right does, greatly assists in understanding how politics really work.

Bausman plugged a couple of alt-right podcasts: Fash the Nation and Richard Spencer’s Alt-Right Politics. He described McFeels and Halberstram as “two Beltway policy wonks who sound like they are in their late 20s or early 30s, who spend a couple hours each week talking politics,” and who “point out when Jewish interests are at play.” He noted that their use of “obscenity” “detracts from their credibility,” but chalked it up to their “youthful ignorance.”

The article racked up thousands of views, and prompted Russia Today (RT) — another pro-Kremlin mouthpiece — to distance itself from Bausman and Russia Insider. According to The Daily Beast, a spokesperson for RT said Bausman had been “blacklisted” from their media outlet and directed to remove all RT’s content from his website. (At the time the evidence for such a blacklisting was thin.) And although Bausman “repeatedly denied” taking money from Russian oligarchs, he did not dispute the veracity of an email requesting money from one.

Bausman’s “It’s Time to Drop the Jew Taboo” article wasn’t an isolated incident either. A cursory glance at Russia Insider reveals scores of articles promoting white nationalist propaganda, alongside fawning, pro-Putin pieces. “MUST WATCH: Tucker Carlson’s Interview with Trump on the Putin Summit” reads one headline. The author of that article, Andrew Anglin of the Daily Stormer, called Carlson a “national treasure” and endorsed him for president in 2024.

In another, titled “100 Years Ago Jewish Communists Slaughtered the Tsar, his Wife, Children, Relatives, and Servants — Major Memorials All Week Long,” Fr. Andrew Phillips wrote that “Russian Orthodox Christians” were “celebrat[ing] the martyrdom of the last Christian Emperor.” That people in the “atheist West” were not concerned with such celebrations or the death of the Tsar was the result of rampant “anti-Christian” and “Russophobic” attitudes, he wrote.

One article defended Ron Paul’s promotion of a racist, anti-Semitic cartoon about “cultural Marxism.” The cartoon depicts caricatures of a Jew, an Asian, an African-American, and a Hispanic man; their left arms combine to form a single fist emblazoned with a hammer and sickle, delivering an upper-cut to Uncle Sam. Michael Quinn, the article’s author, called the cartoon “truthful” and accused Paul’s critics of having a “self-righteous neurotic fit.” 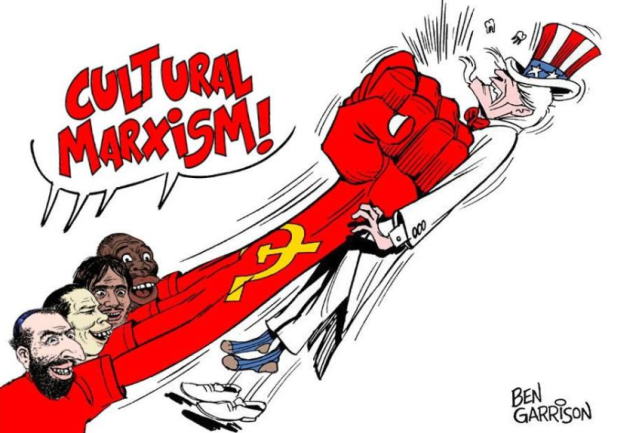 Other authors whose work is featured on the site include white nationalist Pat Buchanan, Tyler Durden of the fake news site Zero Hedge, WorldNetDaily’s Joseph Farah, Orthodox Christian convert/anti-Semitic vlogger Nathanael Kapner, and Caitlin Johnstone, a left-wing crackpot who’s promoted conspiracies about murdered DNC staffer Seth Rich. It is unclear who, if any, of these authors were notified of, or compensated for, their work appearing on Russia Insider in the first place.

What is clear, however, is that Bausman is not the serious “citizen journalist” he pretends to be. He’s deeply dishonest, extraordinarily racist, an unabashed supporter of authoritarian rulers, and secretive about the source of his website’s funding. And his website, Russia Insider, embodies the disturbing symbiosis between white nationalists at home and abroad.