Gab founder and CEO Andrew Torba is mad online. Apparently it’s because people — especially journalists — keep referring to his Twitter knock-off as an alt-right website. In the inaugural episode of his clumsily named Free Speech Radio, Torba went on a 30 minute rant about censorship and “sophist” journalists who, for reasons inexplicable to only he and his staff, keep associating Gab with white nationalists.

Torba said that when he “started to see empirically that censorship was coming,” he founded Gab as “an alternative to Twitter that defended free speech, [and] that welcomed everybody regardless of your political ideology.” He said that Gab’s “mantra” has been freedom of speech “from day one.”

He praised his nearly 500,000 users, calling them “an amazing community.” And he took umbrage at the claim that his users are predominantly white nationalists, or alt-right. As Torba said:

None of us are alt-right. I am not alt-right, no one on our team is alt-right, the company is not alt-right. We never have been. Do we have alt-right users? Certainly. Alt-right users also exist on Facebook, on Twitter, on Reddit, and everywhere else on the Internet. We have good people. Good people who believe in individual liberty, the free-flow of information, and free expression. And I’m sick and tired of the media attempting to paint us as this evil bogeyman. Attempting to paint our entire community as something horrible. Attempting to paint free speech and free expression as something that should not be desired.

Indeed, I wonder how anyone could’ve gotten the impression that Gab is an alt-right platform? True, its mascot is a frog, just like Pepe, the cartoon character that became an unofficial alt-right symbol. But Torba said that he chose a frog as Gab’s mascot as a reference to the biblical plague of frogs in the Book of Exodus.

Imagine being such a soy-infused beta that you need to glue on fake eyebrows to look more masculine.

What in the world?

You are such a massive cuck https://t.co/tar5AS2aJO 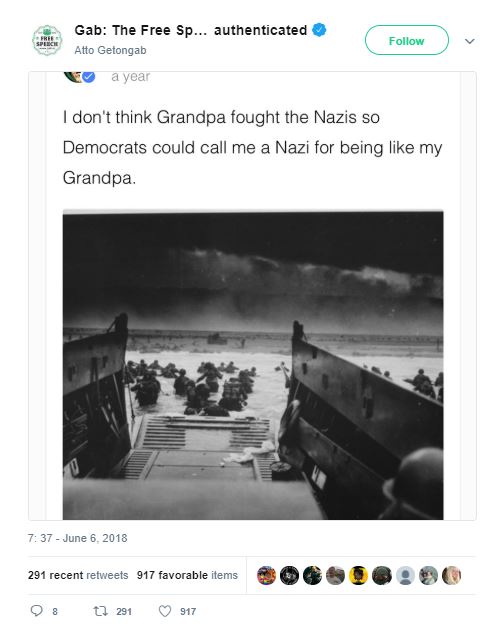 I’m sure using alt-right terms like “soy-infused beta,” “cuck,” and “clown world,” fearmongering over dark-skinned foreigners, and promoting the account of a white supremacist are all just coincidental. Honestly why would anyone look at this and conclude that Gab is somehow friendly to the alt-right?

Later in the podcast Torba pushed a conspiracy theory of his own: that the people who flagrantly violate Gab’s (few) terms of service are actually paid shills pretending to be Neo-Nazis. He said that this attempt to link his site with white supremacists is often coupled with DDoS (distributed denial of service) attacks and media hit pieces.

“Now about, almost three weeks ago now, I put out a post on Gab and I said every time something big happens for Gab in a positive sense we get this flood of negativity and attacks that follow it,” he said. “And these are an effort to subvert our community, to stop our growth, to attack us, to bring us down in any means necessary.”

He explained that this “cycle” is usually marked by DDoS attacks, getting “swarmed with bots, with spambots,” followed by the “paid shills” who “create accounts that are a month old or less” and “LARP, pretending to be Nazis.” (Other “paid shills,” he said, “claim to be Democrats, antifa.”) “And what follows after these few things,” he continued, “is hit pieces from the mainstream media.”

Gab has recently been profiled (less than flatteringly) in pieces by The Daily Beast and Gizmodo, the latter of which discussed Torba’s weird false flag claims. Both articles drew Torba’s ire at least in part because of small inaccuracies — for example, claiming COO Utsav Sanduja banned or blocked some 5,000 users. In actuality Sanduja muted them.

Setting mistakes like that aside, Torba’s claim of left-wing agitators disguising themselves as Nazis in order to paint Gab as a trainwreck and hostile environment for users simply isn’t backed up by any evidence. Or at least no evidence that’s been offered by Gab’s leadership. In all likelihood it’s just his way of shifting blame onto outsiders to distract from the fact that his platform really is just a digital haven for bigots.