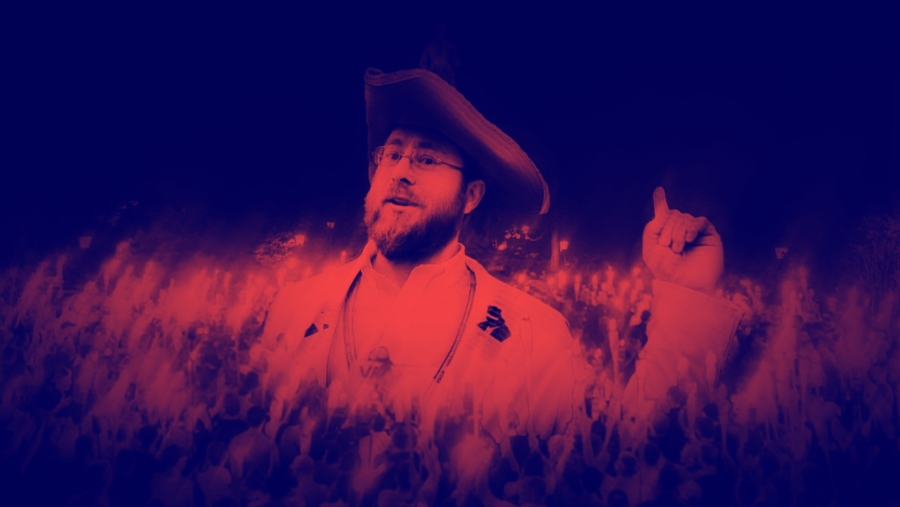 Recently it was discovered that Andrew Dodson, a 34-year-old white nationalist who attended last year’s “Unite the Right” rally had died in March. No official cause of death has been released, though his death has been labeled a suicide by many, mostly on the alt-right. Dodson, it would seem, had his name revealed last year by the Twitter account @YesYoureRacist.

Shortly thereafter the Arkansas Times ran a story about Dodson, who was quoted as saying he would continue going to similar rallies in order to “figure out what these guys are about.” The article also claimed Dodson lost his job as a result of his participation at “Unite the Right.”

Two months after Dodson’s untimely death and the alt-right has made Dodson into something of a martyr — white nationalist media outlet Red Ice TV aired a short tribute video, and one Gab user created a topic titled “RIP Andrew Dodson AltRight [sic] Hero.” Others have reacted with anger, casting blame for Dodson’s apparent suicide on a coordinated harassment campaign by Antifa.

And it’s not just faceless left-wingers either. White nationalists are vowing revenge against Logan Smith (the owner of the @YesYoureRacist account), the CNN reporters who interviewed him, and even Arkansas Times writer Jacob Rosenberg. They believe that, regardless of Dodson’s participation in a public and nationally televised rally, publishing his name was tantamount to killing him.

Matt Colligan (a.k.a. Millennial Matt) took to Periscope where he railed against Smith and CNN, accusing them of having caused Dodson’s death themselves.

Colligan, who was recently suspended twice from Twitter, insisted that “something has to happen” and encouraged his supporters to do a Google search on Smith’s name to “find all of the information you want” about him. He said that “people need to get sued” or “worse,” and alleged that “there’s literally blood on [Smith’s] hands.”

Billy Roper, a Neo-Nazi who heads a group called the ShieldWall Network, paid tribute to Dodson and gave out Jacob Rosenberg’s address in a blog post. The post was taken down after WordPress received “a valid complaint regarding the publication of private information.” On his eponymous Roper Report, the Neo-Nazi said:

It’s worth noting that Rosenberg never published private information such as Dodson’s address, phone number, Social Security Number, email address or anything else. He and the Arkansas Times only reported on his name and noted that he once resided in Arkansas. Roper made no such distinction and called for the mass doxing of journalists and their families.

He continued this tirade by boasting of he and his compatriots’ “Aryan” blood. “They should be afraid of us!” he announced. “We are Aryans! We are conquerors, our ancestors conquered the entire world, because they were Aryans! They never feared a non-white!” He continued to harp on this point — that they share the blood of the “conquistadors” and “vikings” and “crusaders” — adding that they should not be afraid of striking back against their enemies.

And a week ago the hosts of the alt-right podcast Right to Bryden ranted about their plans to dox journalists, denouncing them in anti-Semitic and homophobic terms. Bryden, who referred to Jacob Rosenberg as a “yid,” commanded listeners to wage war on the press. “It’s okay to dox journalists, guys, it’s completely okay!” he said. “These people have names, they have addresses, and they have phone numbers. Fuckin’ get ’em!”

His co-host, Spicci, informed him that he’s already on it. “I decided Friday night, we had this conversation, a few of us, I am going to — I already have started from people like Emily Gorcenski … Logan Smith, scumbags like that, Andrew Kaczynski who doxed a guy over a fucking GIF, I’ve decided that I am going to make a nice database. And I don’t give a fuck if they’re a meteorologist if they’re on fuckin’ CNN affiliated with scumbags like Andrew Kaczynski — they’re going on this.”

This “database,” he said, would include private information including addresses and phone numbers of journalists and be kept on Pastebin — a text storage website. “When they move, when it changes, when they do anything — change their fucking phone number — I will fucking find you and I will update it!” he threatened. “This is what I’m doing now — every single motherfucking one of you. We need to make journalists afraid again.”

To that end, Spicci, under the Twitter handle @WomenRTrash, informed Logan Smith that he would systematically dox and menace every one of his 300,000+ followers. Why? Likely because Smith’s information is already known, and his followers are just easier to target and terrorize, regardless of their innocence.

As he told Smith on Twitter, “it’s time to get doxy up in this bitch.” He then began tweeting phone numbers (work and personal), addresses, and photos of Smith’s followers and those of their families and friends. In another tweet he wrote, “this is a reminder that you can run from me @yesyoureracist but youre [sic] my bitch now, i [sic] will dox anyone that you come in contact with, their families, their friends, their cats, idgaf.” He added, “you have blood on your hands and i wont [sic] stop until you are destroyed.”

Days after he began doxing random Twitter users, Spicci’s account was suspended. However, he was not the only participant — several Twitter users linked to Spicci and Bryden (a.k.a. @Aactualracist) have been leaking personal information as well. And besides that, it is likely that Spicci, like other white nationalist Twitter users, will simply make a new account and continue this intimidation campaign unless Twitter gets serious about curbing this type of behavior.

Such attacks against the press picked up after Donald Trump announced his candidacy in 2015, and have intensified after he assumed the presidency in 2017. In February 2017, Trump denounced the press as the “enemy of the American people.” By April 2018, half of Republicans agreed with this sentiment.

Trump and flunkies have frequently attacked individual reporters and TV anchors, including Joe Scarborough and Jim Acosta. These repeated attacks on the “fake news” media have resulted in real life consequences — in January a man named Brandon Griesemer threatened to massacre CNN employees.