This week the already flailing alt-right movement suffered another major setback as prominent alt-right troll “Ricky Vaughn” was unmasked by fellow white supremacist Paul Nehlen. In a since-deleted Gab post, Nehlen revealed Vaughn was actually 28-year-old Doug Mackey — apparently as revenge for appearing on a podcast critical of Nehlen and his Congressional campaign.

As revealed by Luke O’Brien at HuffPost:

Mackey is from Waterbury, Vermont, a small town of around 5,000 people in the middle of the state. His father, Scott, a lobbyist who focuses on tax policy affecting wireless communications and the digital economy, was a former legislative aide to the late U.S. Sen. Jim Jeffords (R-Vt.). When contacted by email, Mackey’s parents, Scott and Kathy Mackey, told HuffPost that “we were devastated to learn this week of Doug’s beliefs and on-line activities as reported in the Huffington Post. They are antithetical to the values we hold and with which he was raised. We are still trying to understand how he could have done something like this and hope he will find some way to make amends for the harm he has caused.”

Growing up in Vermont, Mackey went to Harwood Union High School, then nearby Middlebury College, where he competed on the track and field team for one season, running mainly the 800-meter distance. He graduated in 2011 with an economics degree.

After college, he moved to Brooklyn, New York, and took a job as an economist at John Dunham & Associates, an economic consulting firm that uses data to help clients “respond to threats and opportunities in the policy arena.” When reached by phone on Wednesday, the president of the company, John Dunham, confirmed that Mackey had been an employee there from April 2012 to July 2016, when he was terminated for reasons that Dunham could not reveal under New York labor laws.

As “Ricky Vaughn,” Mackey regularly spewed racist, anti-Semitic, and conspiratorial messages on Twitter. And while his main account, @Ricky_Vaughn99, was ultimately suspended from the platform in October 2016, he returned with two new accounts: @RapinBill and @VRichard69.

But now, with Mackey’s downfall, the infighting within the alt-right has reached a fever pitch, with prominent white nationalists taking sides over optics and the ethics of doxing. Christopher Cantwell applauded Nehlen’s decision to unmask Mackey, and Nehlen explained his decision to do so on Wednesday’s episode of The Radical Agenda.

According to Nehlen, Mackey approached him with a business proposition: for $2,500 per month, he and his Smartcheckr Consulting Group would assist him in his race against House Speaker Paul Ryan. According to a document provided by Nehlen and published by Cantwell, Mackey would provide “extreme opposition research” and “content/message creation and digital (Facebook) ad buys in order to more efficiently target donors and voters.”

Nehlen told Cantwell he reluctantly agreed and gave Mackey “full access” to his Facebook page. Three months later, however, Nehlen had little to show for it. “He didn’t post anything, he didn’t do anything,” Nehlen complained. “He was suggestin’ that he was gonna be able to grow my audience, or whatever. He did nothin’. He did absolutely nothing in that time, and I took him back outta there!”

The final straw, he said, was when Mackey appeared on a podcast whose host accused Nehlen of misappropriating campaign contributions.

“So, I reacted after several hours of waiting to see is [Mackey] gonna disavow this thing,” Nehlen explained “‘Cause he was tagged in it, he had every opportunity to look at that and say, ‘You know what, this is wrong. We should’ve asked — you guys should’ve asked Nehlen about this stuff instead of just goin’ out and accusing him of something, and making it look like there was some impropriety.'”

Cantwell of course wholeheartedly backed Nehlen on this — after all, Cantwell and Mackey were on different sides of the alt-right’s optics debate. One side of the alt-right refuses to denounce the movement’s most violent factions, while the other — the “optics cucks” as they’re derisively known — prefer not to project an image of lawlessness, want nothing to do with white nationalists who dress in Nazi-era uniforms, and label those who do “LARPers.”

Cantwell also believed Mackey crossed the line by denouncing many white nationalists as little better than Islamic terrorists, and criticizing the concept of white identity. Mackey was, therefore, nothing but a traitor to “race and nation” in Cantwell’s eyes.

In fact, Cantwell accused both Mackey and Andrew “weev” Auernheimer of attempting to sabotage the alt-right. Although they were once close allies, with Auernheimer making guest appearances on The Radical Agenda, the pair recently had a falling out after Cantwell copped to being a federal informant. After Mackey was doxed, Auernheimer condemned Nehlen as “human detritus” on The Right Stuff’s forum.

Nehlen, on the other hand, had nothing but praise for Auernheimer, and said the Neo-Nazi hacker once assisted him with a “computer problem” — although he didn’t get into specifics. Whatever it was, it was enough for Nehlen to be “forever indebted” to a white supremacist who idolizes mass murderers and supports rape.

But while Christopher Cantwell threw his weight behind Nehlen’s team, other alt-right figures appear to have broken with the fringe candidate for good. By April 2nd, Richard Spencer tweeted that Nehlen “needs to just go away”:

He later tweeted that doxing is the Internet equivalent of “nuclear war,” and used the hashtag #IStandWithRicky:

On the Internet, doxxing is the equivalent of nuclear war: it is brutal and leaves a toxic aftermath and unintended consequences. I disagreed with a lot (not all) of what Ricky Vaughn wrote recently. But nothing he said came close to warranting a doxxing strike. #IStandWithRicky

I stand with Ricky. Doxing is inexcusable behavior. #IStandWithRicky

I don't see how doxing the guy could ever be justified, particularly given how badly we knew that the J-left wanted him. I disagreed with his stance on white identity, and we were gonna debate the issue. Now instead of that debate we have the toxic environment created by the dox.

On Gab, Spectre — co-host of the Third Rail podcast — also broke with Nehlen, calling him an “oily little shitbird traitor”: 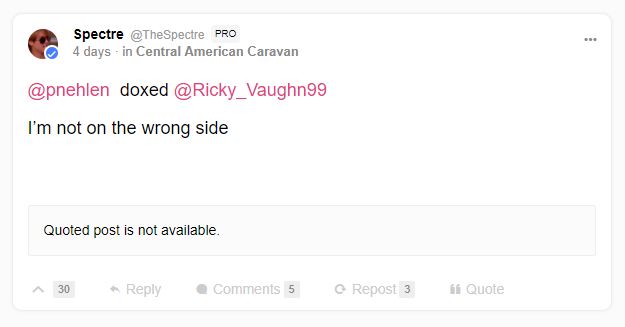 And on his America First show, alt-right activist Nick Fuentes made a spectacle out of disavowing Nehlen. Fuentes and Nehlen had already been feuding after Nehlen was disinvited from speaking at this month’s American Renaissance conference — something Nehlen blamed Fuentes for.

Fuentes upped the ante, however, railing against Nehlen for cozying up to Cantwell and David Duke, and for having as his spokesman a “homosexual, degenerate, globalist and a liar.”

“You know, we disavowed him on a Periscope once, it was a minor thing, but now Nick the Knife has to — we have to have a little bit more of a serious disavowal to show you that I am serious about this,” Fuentes said, “because Paul Nehlen, he’s dead weight, he’s draggin’ us all down, he’s a dummy, he’s low IQ, he can’t handle the things he’s learned, and now he’s gonna dox my friend Ricky Vaughn?”

Having pulled out a folding knife and a “Nehlen For Congress” sign, Fuentes began stabbing it repeatedly, informing his audience that Nehlen is “out of the movement” and that “we are done with Paul Nehlen.” Fuentes began sawing the sign in half, eventually tearing it in two. Draping himself with a large “TRUMP” flag, Fuentes announced that “we are back to the age of the God Emperor.”

To compound Nehlen’s problems further, his doxing of Doug Mackey proved too much even for the leadership at Gab, the alt-right Twitter clone whose motto is “Speak Freely.” Gab founder Andrew Torba made the decision to implement a lifetime ban on Nehlen, leaving him to gripe on Facebook about the “censorship war.”

In a Gab post Torba wrote that Nehlen had been banned for “violating our Community Guidelines related to publishing private information without a user’s consent.” He added that this was not the first time Nehlen had engaged in this behavior, and that he had been previously warned.

In a Periscope video Torba elaborated, telling Gab users that Nehlen previously ran afoul of Gab’s rules when he began posting critics’ contact information. “So Paul is absolutely aware of Gab’s user guidelines when he made the decision to post this personal, private information about somebody,” Torba said. “We can’t be known as the place where people get doxed, and we allow it to happen. There has to be consequences to it.”

In response, Cantwell griped that Torba needed to “learn to ignore the whining of dishonest people who want censorship to cover up their many sins.” He added, “This is not a ‘Free Speech’ platform. Let us hope we can can find one before the hate speech and bullying rules are implemented.”

Others took aim squarely at Cantwell, calling him, for instance, a “bald wigger faggot,” or instructing him to “eat a bullet sandwich.” Even Vendetta Vidame of the alt-right podcast Salting the Earth, lashed out at the Radical Agenda host. “Cantwell is a nigger, and he belongs in prison with the rest of all niggers,” he wrote. “I’m sincerely sorry my podcast was ever used to raise money for his release.”

And with that, the alt-right continues its long, downward spiral into oblivion.