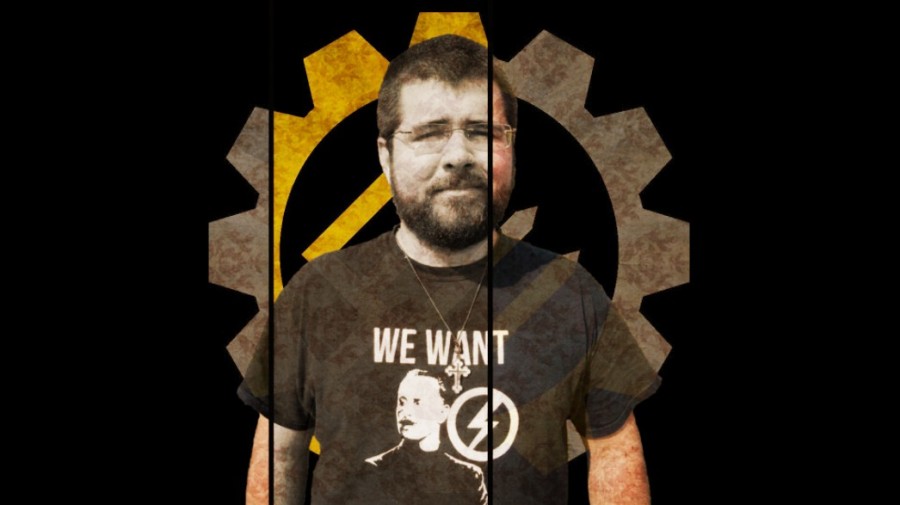 On the December 5, 2017 episode of The Daily Traditionalist, Neo-Nazi Matt Heimbach and his co-host Sven Longshanks weighed in on the recent controversy over the alt-right’s treatment of women.

White nationalist vlogger Tara McCarthy complained on Twitter about the abuse she received at the hands of alt-right men who have been demanding to know why she, as a “trad” woman, hasn’t gotten married and started a family yet.

On the alt-lite, Lauren Southern has received similar treatment by white nationalists for this and other issues. (Southern had apparently dated a non-white man, much to the horror of her racist fanboys.)

As many people have already pointed out, the alt-right isn’t exactly welcoming to women. Or at least to women who want to do more than make white babies to populate the future ethno-state.

Heimbach might not be a fan of people who talk approvingly about “white sharia” and “white rape gangs,” but he certainly believes in rigid gender roles and sees feminism as a scourge that needs eradication. Heimbach said that men need to “encourage women to do their jobs,” holding his wife up as an example of how all women should comport themselves. On the other hand, women like Lauren Southern are a danger to the movement.

This somehow proves that Southern, who makes a living off bashing feminism, is actually “a feminist in every single way.”

Heimbach also had choice words for Fox News contributor Tomi Lahren whom he noted was fired from The Blaze over her pro-choice views. “The idea of a woman being a nationalist and supporting the murder of the unborn — the womb is supposed to be a place of life, it’s not supposed to be a mausoleum,” he said.

And he called women like Southern and Lahren “inherently disrespectful” to genuinely “traditional” women who “are actually doing their jobs.” He asserted that if women are supported and encouraged to adopt traditional roles they will finally “break free from feminism” and “break free from the slavery of modern America.”

Heimbach also imparted some wisdom for his listeners:

Which is similar to the advice I give people: When in doubt, ask yourself what a Nazi would do. Then do the opposite. For the good of humanity I mean.

Sven Longshanks agreed that Lauren Southern and Tara McCarthy aren’t “playing complimentary roles” and are, instead, “trying to play the male role” by engaging in activism and making their own online shows.

Longshanks, however, saved his vitriol for Tara McCarthy over her Indian and Jewish ancestry. McCarthy might be mostly white, but for Longshanks this just isn’t good enough. “And to be honest, Tara McCarthy — I keep saying it — she’s not white,” he fumed.

And he ranted that anyone who is not one hundred percent white has no place among white nationalists:

I don’t know what she’s doing in the movement, to be honest. Somebody who’s part Indian and part Jewish, they should never even be allowed to have a voice. How come she has a voice in this movement when she’s not white? How can somebody like that advocate for white people? You very rarely hear her talkin’ about miscegenation. I mean, one thing you would expect to hear her saying is how terrible miscegenation is, and how that means that she cannot have a white husband, she’s gotta find herself some mixed-race person to breed with because she doesn’t want to contaminate the genes of anyone else. But you don’t hear her saying that. What you hear her saying is “I identify as a European. I identify as white.”

Longshanks believes that her presence in the movement will only normalize and encourage more “miscegenation.” And then, before you know it, “white countries will look like India.”

Heimbach interrupted in order to praise the work of Theodore Bilbo, a two-time Mississippi governor and U.S. Senator known for his staunch support of white supremacy.

Pointing to Bilbo’s 1947 treatise Take Your Choice: Separation or Mongrelization, Heimbach claimed that even mere segregation would not be sufficient to stop races from “dying out” through “miscegenation” — which he said was the “Jewish plot.” In fact, Heimbach is such a supporter of complete separation that he decried South African apartheid as “inherently liberal.”

Finally, on the question of whether or not someone of Jewish ancestry can be a part of the alt-right, Heimbach said:

He said this is especially true of women like Tara McCarthy who are “out there with Jewish backgrounds.” His advice to McCarthy and others like her? “Go to Israel and advocate for your people there, and we’ll see what the Arabs do to handle that situation.”