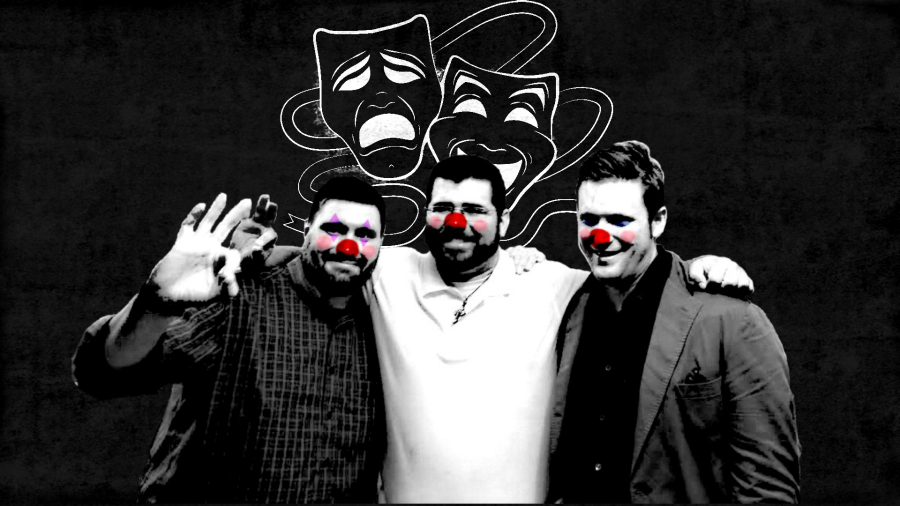 From the inauguration of President Donald Trump to Charlottesville to Shelbyville, the alt-right has had a big year in 2017 — and one which was almost completely devoid of victories. Podcasters were doxxed, speakers were shouted down, lawsuits were filed, and activists were maced — to name just a handful of humiliations. And in honor of the alt-right’s…ahem…achievements in the current year, I’ve compiled a list of white nationalists who owned themselves the hardest.

Now, not all far-right activists who embarrassed themselves this year made the list because they’re not all alt-right. Thus, alt-lite activists such as Laura Loomer — who’s been accused of sexual harassment, was banned from Uber for frothing at the mouth over Muslim drivers, and eventually lost her Twitter checkmark — are not making an appearance. Also, incidents like Richard Spencer’s sucker punch don’t qualify because they aren’t really self-owns.

[I know this is technically a group of people. Originally this entry was just going to be reserved for Mike Enoch, but I changed my mind.]

Out of all the modern white nationalist websites, few are as popular as The Right Stuff (TRS), which boasts both a forum and several podcasts — and always makes me think of that New Kids On The Block song.

But early this year the alt-right powerhouse was rocked by a doxxing scandal that temporarily crippled it and sent several of its most notable radio personalities packing.

It really started in December 2016 when Ghoul — a member of The Daily Shoah‘s “Death Panel” — had his identity revealed by Nebraska Antifa and offered to turn in his own comrades. Of course, that’s what you get when you’re rock-stupid enough to post pictures of yourself on Facebook holding a sign that says “I am Ghoul.”

This was followed by 8chan revealing the names and contact information of Bulbasaur (a TN corrections officer named Van Robert Bryant II) and Seventh Son (Jesse Dunstan of Fishkill, NY).

And while TRS was still reeling from these doxxing incidents, an anonymous writer revealed that the website’s founder Mike Enoch was actually Mike Peinovich, a schlubby New York web developer with a Jewish wife and a skin condition.

The fallout was quick: Ghoul and Bulbasaur fled, Jazzhands McFeels and Marcus Halberstram (of the podcast Fash the Nation) went on an extended hiatus, and for a while it looked like Enoch might quit altogether. No such luck.

Even with his marriage in shambles and his own dad asking him to change his name, Enoch pressed on, continuing the podcast and tagging along with Richard Spencer on his college tour.

(In one exchange Enoch is inexplicably proud of, an Auburn student asked if she would be considered “white enough,” presumably for membership a hypothetical ethnostate. Enoch cut in and asked her, “Do you ask black people that question?” The obvious answer would be “no,” because Enoch and his crew are the only ones seeking to build an all white ethnostate.)

As for Dunstan, he’s still a member of the Death Panel, where he hosts a new show called Jazz & Jesse and records hackneyed song parodies such as “LARP Like An Egyptian” and “Yer So Trad.” He’s basically a low-rent “Weird Al” Yankovic, only without the latter’s sense of humor and command of the English language.

There was a time when The Daily Stormer was the most popular hate site on the Internet. That was before the site’s founder, 33-year-old Andrew Anglin, screwed it all up, that is.

This wannabe Führer with a Napoleon complex was getting plenty of web traffic with his unique fusion of Neo-Nazi ideology and ironic memes. And then Charlottesville happened.

At a time when emotions were still raw, Anglin thought it would be edgy to mock Heather Heyer — the anti-racist protester murdered by white nationalist James Fields Jr. — as a “slut” with “no value.”

That was the last straw for both GoDaddy and Google, which pulled the plug on the Stormer’s domain. What followed was a game of Nazi whac-a-mole, as country after country refused to host Anglin’s digital dumpster fire.

And on top of that, Anglin is currently dodging not one, not two, but three different lawsuits. The first was brought by a Jewish real estate agent from Whitefish, MT in response to a sustained terror campaign by Anglin and his allies.

The second, a defamation suit, was brought by comedian Dean Obeidallah over the Stormer’s false claim that he masterminded the May 22, 2017 Manchester bombing.

And finally, Anglin and Moonbase Holdings, LLC — a company he registered — were named as defendants in a federal lawsuit brought by a group of Charlottesville residents.

According to the 96-page complaint, Anglin “advised rallygoers on bringing weapons” and “through Daily Stormer, Moonbase Holdings, set up a [Discord] channel for co-conspirators to coordinate unlawful acts, including acts of violence, intimidation, and denial of equal protection.”

Once used his perch at The Daily Caller to relentlessly defend the Lost Cause of the Confederacy. Was fired for crossing the line from opinion into activism after he spearheaded a rally in defense of Confederate monuments alongside prominent white nationalists.

But this was just a test run for a much larger project: the “Unite the Right” rally in Charlottesville. The goal of the rally was, as its name implied, to bring together various far-right organizations and figures — from old school Klansmen to militia members to alt-right activists — in order to combat the Left.

The result was a spectacular failure, with several rallygoers arrested and numerous injuries. James Fields Jr., who was spotted carrying a shield with the Vanguard America insignia, sped his car into a crowd of protesters and killed 32-year-old Heather Heyer.

And two police officers lost their lives when their helicopter crashed while observing the rally from above.

Among the people facing charges in connection with the rally are James Fields Jr., Christopher Cantwell, Alex Ramos, Jacob Goodwin, Daniel Borden, and Richard Preston. Kessler himself was indicted on a felony perjury charge over a sworn statement he made to a magistrate judge early this year.

Post-“Unite the Right,” Kessler appeared to be in a downward spiral. He was chased out of his own press conference by an angry crowd of Charlottesville residents who shouted “Shame!” and “Indict for murder now!”

On Twitter he unleashed an angry tirade against Heather Heyer, calling her murder “payback time.” This was a bridge too far for Richard Spencer, who called Heyer’s death “deeply saddening” and vowed to never again work with Kessler.

Kessler later claimed his Twitter account was hacked. Then he blamed a combination of alcohol, Ambien, and Xanax. Then he made his account private. Then he deleted it.

But that didn’t stop him from coming back and pinning the blame for the rally’s failure on former comrades like Spencer and Eli Mosley.

After accusing Spencer and Mosley of maintaining a cult of personality in a tweet from September 13, Spencer announced he had blocked him:

For alienating his former friends and dividing the Right more than Antifa ever could, Jason Kessler more than deserves an entry on this list.

The Radical Agenda host has always been an interesting and polarizing figure. Beginning as a staunch libertarian in the vein of Murray Rothbard and Hans-Hermann Hoppe, Cantwell’s bizarre antics in Keene, NH earned him the scorn of comedian Stephen Colbert.

After he was booted out of libertarian circles for using racial slurs, Cantwell moved further and further right until he found a home in the white nationalist alt-right. His online show became a cesspool of anti-Semitism and violent rhetoric, and he was openly associating with the likes of Andrew “weev” Auernheimer.

Cantwell always talked a big game when it came to subjects like the forthcoming “race war,” where he dreamed of “gassing” Jews and “curb-stomp[ing]” African-Americans.

Even after the “Unite the Right” rally — during which he was maced twice — Cantwell showed off his firearms and boasted to Vice reporter Elle Reeve that he was “trying to make myself more capable of violence.”

And then he learned there was a warrant out for his arrest for allegedly pepper spraying a pair of counter protesters. That’s when Cantwell cued up his Periscope and let the crocodile tears flow.

During this Oscar-worthy performance, filled with sniffling and dramatic pauses, Cantwell said he felt “under attack as a racial group” and dismissed his genocidal rants as a “fuckin’ gag.” “We have done everything in our power to keep this peaceful,” he whined.

“We’ve been coordinating with law enforcement the entire time. Every step of the way we’ve tried to do the right thing. And they just won’t stop! We have done everything in our power, we have used every peaceful and lawful means by which to redress our grievances. And our enemies just will not stop.”

Cantwell, now known as the “Crying Nazi,” is awaiting trial on two charges of illegal use of gas. He was recently granted bond after months in Albemarle-Charlottesville Regional Jail, and immediately made a guest appearance on The Daily Shoah where he went back to the tough-guy routine — calling the prosecutor a “prick” and talking about “gassing kikes and trannies.”

Was there any doubt that this walking mullet would snag the number one spot? Sure, the former BuzzFeed writer and aspiring rapper might’ve found a comfortable living on the dark side — but nothing could stop his deep-seated desire to own himself at every conceivable turn.

At the “Unite the Right” rally, Baked Alaska was livestreaming when someone maced him square in the face. The footage of Baked writhing on the ground, yelling in agony and begging for milk to wash out his eyes was pure schadenfreude. (They haven’t caught the man responsible, but I have a suspicion that his name rhymes with “Shmaked Shmalaska.”)

After being forced to endure a deluge of milk and mace-related memes on Twitter, this litigious idiot threatened to sue everyone who called him a “Nazi” — in spite of his fondness for tweeting “1488” and gas chamber jokes.

In what was probably the dumbest lawsuit threat of all time, he actually photoshopped himself holding a gun, then threatened to sue a news outlet for defamation when they used the picture in a video about white nationalists who support Bashar al-Assad.

What followed was an eight hour livestream in which the disheveled YouTube personality wandered around in a parking lot to ask strangers why mean old Jack Dorsey took his toys away.

The man has been owned so many times, in fact, that an entire website called “Milk Leaks” has been set up to document it all. Yes, this includes an instance where Baked hit on a cosplayer who immediately revealed herself to be 13 years old.

For the Wile E. Coyote of the alt-right, 2017 proved to be one stinging defeat after another.