On Thursday’s episode of Salting the Earth — a podcast hosted by Brian Brathovd (a.k.a. Caerulus Rex) — self-identified alt-right activist Johnny Benitez made a guest appearance in order to accuse alt-lite figures and organizations of exploiting their cause for donations.

Benitez (whose real name is Juan Cadavid) was a member of the Fraternal Order of Alt-Knights (FOAK), the “tactical defensive arm” of the alt-lite Proud Boys organization, until he was kicked out by Gavin McInnes earlier this year.

As Benitez explained in the podcast, his views have changed over time, having identified as a right-winger with a libertarian bent and an Occupy Wall St.-supporting liberal. But he eventually returned to his far-right roots after listening to white nationalist propaganda.

“And so what happened was, I just did a lot of right-wing research,” he said. “I listened to all the people who you’re told not to even lend your ear to at all, people like [Richard] Spencer and others, and you realize that this big bank issue that I have with corporations and banks and power structures is a legitimate concern.”

Of course, he did change his mind on who the real enemy is: “We realize now that all of these banks that I’ve always hated — like Bank of America and Wells Fargo — they all have a similar origin. These were all banks that were founded by Jewish people and who all made their money [off] slavery.”

Bank of America was actually founded in San Francisco in 1904 — long after the abolition of the transatlantic slave trade. Founded by Amadeo Pietro Giannini — who was not Jewish — Bank of America was originally known as the Bank of Italy, but it’s name was eventually changed in 1928. And Wells Fargo was founded by Henry Wells and William G. Fargo — neither of whom were Jewish — in 1852.

Interestingly, Benitez — who makes his support for white nationalist and identitarian movements very clear — is currently dating Irma Hinojosa, the rabidly Islamophobic co-host of The Right View. (She and her associates refer to themselves as the “Deplorable Latinas.”)

Far from softening her political views, Hinojosa has been moving further to the right, promoting increasingly unhinged and racist rhetoric:

Pointing out Muslims are behaving like Muslims throwing people off buildings & hating Christianity is Islamophobia. Saying Muslims follow Muhammad the pedophile who married a 9 year old is Islamophobia. But saying that Muslims can do nothing wrong is stunning & brave.

“If you try to make everything multicultural, you will not have any culture in the end. All European countries have fought for their identity for many, many years.”

Hmm sounds a lot like what I’ve been saying & getting a lot of heat for. It’s the truth.https://t.co/UbKSJhULDl

Massive demographic shifts thanks to inflow of Muslim migrants, now visible even in Sequoia. The average citizen doesn’t notice. This is a visual of what’s to come, men & women in hijabs with children. Do you ever see Muslims with nonMuslims? No. Being replaced isn’t diversity. pic.twitter.com/mlMGHLrwp1

But the Bible has bad quotes too so who cares if we accept thousands of low IQ Muslim refugees from third world countries that believe in sharia & uncovered women are asking for it. It’s not like they will bring their barbaric ideology here. They are just as American as me & you. https://t.co/PtGSObOij4

As well as retweeting white supremacists: 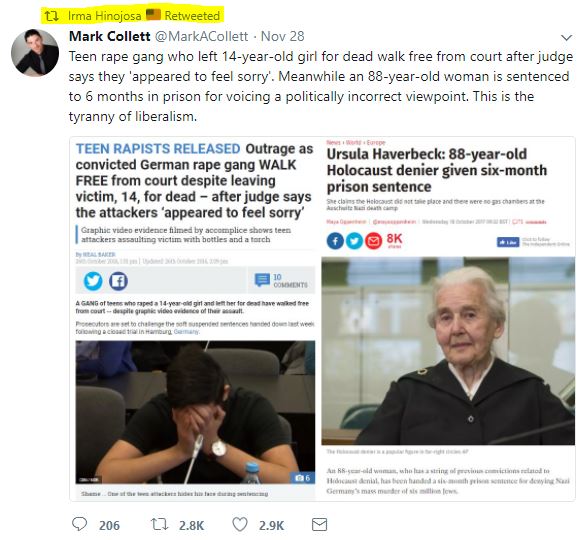 “So you and Irma Hinojosa coined the term ‘the Merchant Right’ for the kind of people who’re ruining the movement out there [on the West Coast],” said Salting the Earth co-host Vendetta Vidame. “Tell us a little bit about them.”

Benitez explained that the “Merchant Right” are “these people who kind of dog whistle the alt-right” for their own financial gain — a category which apparently includes Lauren Southern, Mike Cernovich, and Paul Joseph Watson. (“Merchant Right” is likely a nod to an alt-right slur that refers to Jews.)

And while some people view the alt-lite (or “Merchant Right”) as a bridge between normies and the alt-right, Benitez disagreed, asserting that they’re actually detrimental to the red pilling process.

He also had some choice words for his former Proud Boy comrades such as Kyle “Based Stickman” Chapman. Benitez criticized Chapman for advertising explicitly non-racist events one minute and participating in the “It’s Okay To Be White” campaign the next, which he said proves Chapman is being disingenuous.

He recalled that when he was still a part of the Proud Boys, they “were throwing these alt-right events” such as their “Make Men Great Again” rally. “We talked about white genocide, we talked about all of these things openly and we did that as a chapter,” he boasted. “And that fraternity that we had, that group of men that existed under that banner, no longer operates.”

Benitez claimed events like “Make Men Great Again,” where he was able to “broach these subjects with [Baby] Boomers,” cost him $10,000 “out of my pocket,” of which he could only recoup half. But if he were able to rake in the $100,000 that was donated to Chapman, “we coulda had an event like this every single month” which “would’ve red pilled a ton of people.”