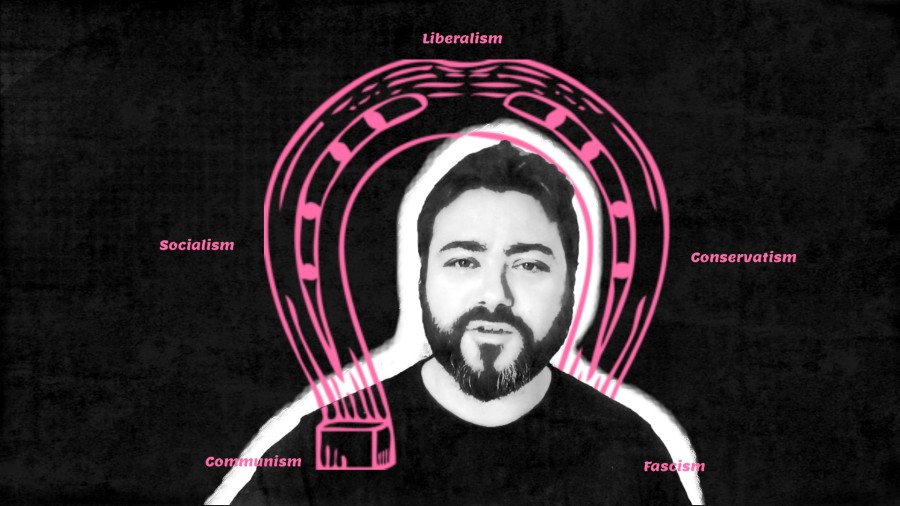 In his November 5, 2017 episode of This Week in Stupid, right-wing YouTube personality and Gamergate supporter Carl Benjamin (a.k.a. Sargon of Akkad) decided to mount a defense of 4chan’s #ItsOkayToBeWhite campaign. Benjamin is not a white nationalist, nor does he identify with the alt-right movement, but he nevertheless applauded their troll campaign for allegedly revealing the Left to be “anti-white.”

“And saying ‘it’s okay to be white’ to progressives is a very interesting trap to lay,” he said, “because, literally, that’s not a racist statement. There is literally nothing wrong with saying ‘it’s okay to be white.’ And it’s actually really difficult to argue against it, even if this is put up by a Neo-Nazi. It’s still a true statement, and they have actually done nothing wrong by saying this in public. Or so you would think.”

Benjamin went on to say that Leftists and journalists “hate white people” and the “concept of whiteness.” In an effort to prove this point that “anti-white discrimination” is a widespread problem, he rattled off a handful of headlines — without discussing the content of the articles — such as this one from The Daily Caller: “Prof: I Chose Not To Have Children, Because They’d Be White.”

The article in question is a selective reading of a piece by Ali Michael that mentioned a phase she went through when she was younger. As she wrote, “There was a time in my 20s when everything I learned about the history of racism made me hate myself, my Whiteness, my ancestors… and my descendants. I remember deciding that I couldn’t have biological children because I didn’t want to propagate my privilege biologically.”

In effect, she was running away from her whiteness — which she compared to the actions of Rachel Dolezal. Now, she favors a more constructive approach, which is “work[ing] with other White people to begin to challenge bias, ignorance and colorblindness.” In other words, taking a more active role in ending white supremacy, which Benjamin feels is akin to anti-white hatred.

In fact, he asked whether it’s “any wonder that the majority of white Americans feel that they face discrimination on the basis of their race.” Cue a headline from a VICE article titled “Dear White People, Please Stop Pretending Reverse Racism Is Real.” Whether or not one finds the title inflammatory (and I don’t), it makes the point that white people have never been persecuted for being white, and that there’s no equivalent to the systemic biases faced by non-whites.

Pointing out white people were not and are not being discriminated against for being white isn’t a sign of anti-white racism. The fact of the matter is white people are not being turned down by prospective employers due to their race or being profiled by police while driving.

A study conducted in New York City found black and Hispanic defendants were more likely to be jailed while awaiting trial or offered plea bargains that include prison sentences. African-Americans are also more likely to be wrongfully convicted.

He also touted an article by The Independent titled, “Black women become most educated group in US,” to prove that white people are worse off than black people. This is a clear misunderstanding of the data. In actuality, for the 2009-2010 academic year, black women “received a higher percentage of degrees within their race/ethnic group than did women in any other major group.”

This mistake could have been avoided if he read beyond the headline, but that would require real work and actual engagement with the ideas he’s criticizing. Instead, his format consists of a rapid-fire listing of headlines he believes paint the Left in an unfavorable light, while he offers shallow rebuttals in voiceover.

After reading a Washington Post headline about a study showing that police are less likely to fire their weapons at black suspects (which did not go unchallenged), he declared that the media is “fucking saturated with anti-white propaganda.” Cue screenshots of things like Dear White People — the Netflix show that spectacularly ruffled the feathers of white nationalists — and sarcastic remarks like, “Oh, what’s wrong broflakes? What’s wrong with MTV and Netflix and the rest of the media denigrating white people?”

“Because it’s all this toxic whiteness that’s causing the problem,” he said. “And by the way, if whiteness can’t be unlearned, then black oppression is permanent. You know, despite the black president, despite the fact that black women are the most educated group, despite the fact that white people are more likely to be shot by cops than black, and various other factors that mean white people are facing — actively facing — institutional discrimination in both the United States, in Canada, and in the UK!”

Later in his rant, Benjamin claimed that non-white identity politics were responsible for the rise in white supremacist groups. For example, he suggested that if people called women a “problem” for “about three or four years,” women would justifiably feel under attack. He added that this example would never happen because “women are a protected class” while white men are “fair game.”

For the record, white supremacy predates modern “identity politics” by centuries. The alt-right can trace its lineage to white supremacist movements of old, including the Ku Klux Klan and the American Nazi Party. It is not a reaction to the identity politics of other groups, even if its adherents argue otherwise.

Moreover, to equate white supremacy with the identity politics of non-white groups is both false and intellectually lazy. In essence, it’s a regurgitation of “horseshoe theory,” which posits that the far-left and far-right closely resemble one another. Thus the politics of white nationalism and the politics of groups like Black Lives Matter are fundamentally similar because both work for the interests of a racial group.

Only in Carl Benjamin’s world of “horseshoe theory” could these two be considered remotely similar.