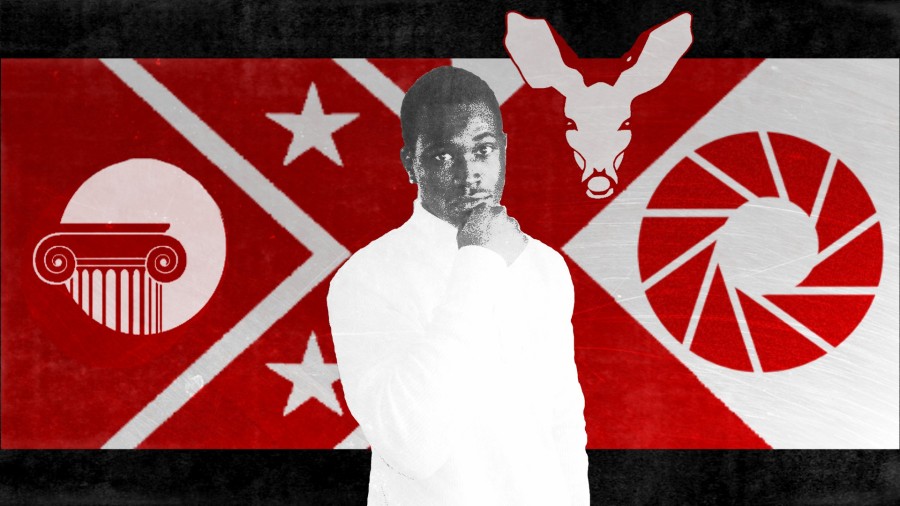 On September 24, 2017 a masked gunman approached the Burnette Chapel Church of Christ in Antioch, TN and opened fire. Melanie Crow, a 38-year-old mother of two, was killed in the church parking lot. And the gunman, revealed to be 25-year-old Emanuel K. Samson, went on to wound 7 more churchgoers before getting subdued by one of the congregants.

The facts of the case — the shooter was black and Sudanese-born, the victims were white and Christian — and its apparent lack of coverage inflamed white nationalists, who immediately called the attack a hate crime, a sign of “black privilege,” and even an act of Islamic terrorism — despite the shooter being a devout Christian.

Alt-right provocateur Chuck Johnson posted an article to his Got News website which called Samson a “black power radical” who shared “pro-Islamic and anti-Western posts on social media.” The article highlighted several innocuous posts, including a Mic video about how white extremists are deadlier than Muslim terrorists and one of Yassmin Abdel-Magied, a Muslim activist, debating Sharia law with Australian politician Jacqui Lambie.

This led some to erroneously conclude that Samson is himself a Muslim:

Samson is not a Muslim, but rather a devout Christian as his social media history demonstrates. On his Facebook page, Samson made numerous posts going back to 2010 celebrating his Christian faith: 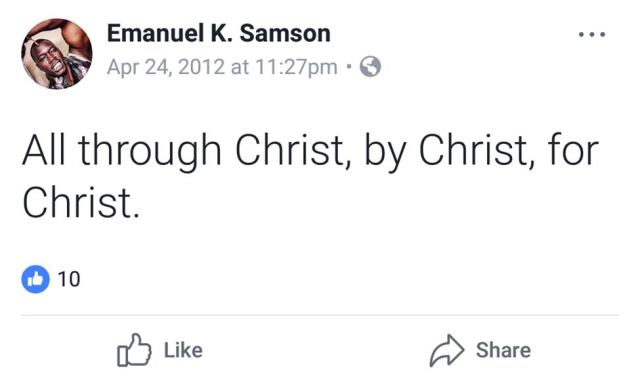 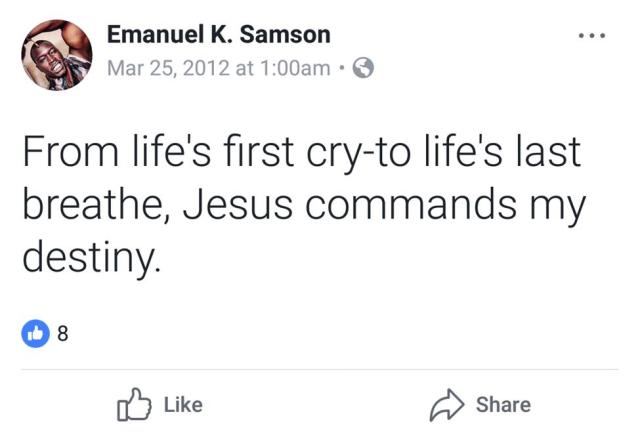 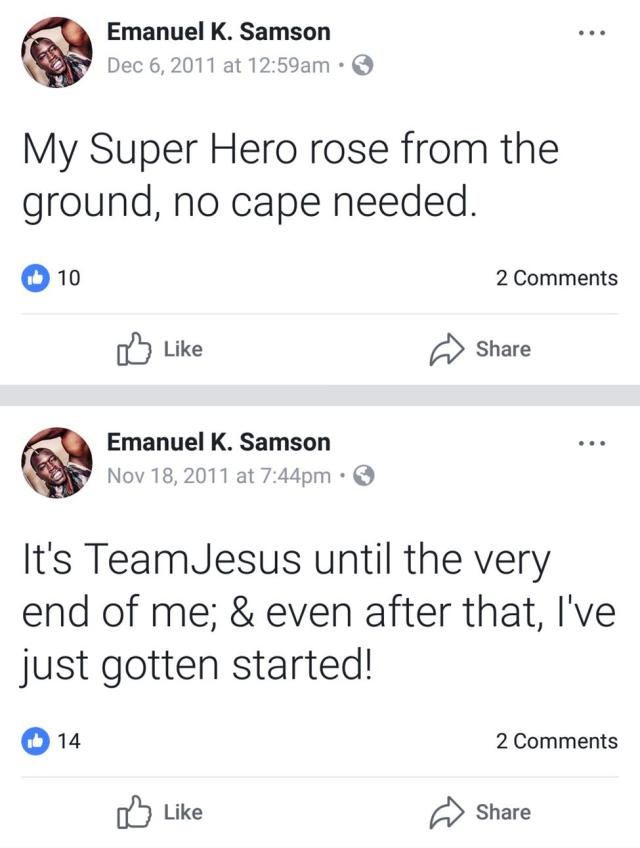 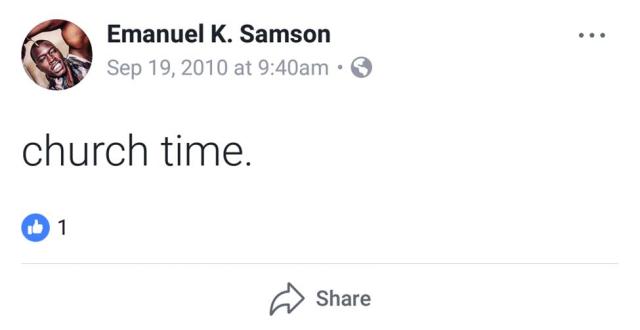 In addition, Samson included The Passion of the Christ and Kirk Cameron’s Left Behind miniseries among his favorite movies and “liked” several pages relating to Jesus Christ and Christianity. In short, the rumors about Samson being an Islamic terrorist were based not in fact, but on anti-Muslim prejudice.

Others dismissed the Muslim angle and instead zeroed in on Samson’s race, calling the shooting an anti-white hate crime without any evidence to suggest this.

In an article for the white nationalist website VDARE entitled “Carpet-Bombing The Social Justice Narrative–Tennessee Church Shooting Is Dylann Roof In Reverse,” John Derbyshire shared an excerpt from The Audacious Epigone which claimed the shooting “is obliterating The Narrative from every angle” and “the inverse of everything that the Dylann Roof shooting” was. Derbyshire noted that “nobody will be calling on us to have a ‘national conversation’ about the Nashville shooting.”

And American Renaissance shared another VDARE article which used this latest mass shooting to call black people terrible marksmen. VDARE contributor James Fulford wrote that “most of the bad marksmanship, or heavy wounded to dead ratio…isn’t from primitive tribesmen, but from regular African-Americans.” Fulford speculated that this was due to black people having lower than average IQs and a lack of knowledge of human anatomy.

Commenters at American Renaissance declared that “disgruntled negroes [sic]” should “take out their frustration on these liberal whites,” and “Every racial group on our planet was more advanced than Black Africans!” One person posted a photo of a chimpanzee firing a gun and wrote “BLM range instructor. This explains a few things.” Another, carriewhite64, suggested it’s “time for blacks to again use only the technology they developed – spears, sticks, and rocks.”

And at Occidental Dissent, white nationalist Brad Griffin also played up the “black Dylann Roof” angle, writing that if it “turns out to be a racially motivated church shooting,” then Samson “will be a reverse Dylann Roof.” Griffin also criticized President Trump for dropping Sudan from his list of countries affected by his Muslim ban. In other words, a blanket ban should be used to keep out people, including children, regardless of whether they display violent tendencies.

And he complained that the Council of Conservative Citizens, whose website Roof was an avid reader of, “was blamed and our national conference in Nashville was cancelled.” He continued, writing that the Confederate flag and the “entire White South was blamed.”

Recently news broke that a note was found in the killer’s car which referenced seeking revenge for the Charleston massacre, which lends some credibility to the claim that the shooting was racially motivated. Yesterday Griffin wrote in another blog post that the discovery of this note proved that Samson is “a reverse Dylann Roof.”

Of course, ever since the Charleston shooting the Right has been searching for the “reverse Dylann Roof.” In August 2015, a disgruntled black reporter named Vester Lee Flanagan II shot and killed two co-workers, Alison Walker and Adam Ward, on live television. Flanagan committed suicide to avoid capture by the police, but a manifesto he faxed to various media outlets revealed he was motivated at least in part by Roof’s crimes.

Breitbart led the race-baiting charge, publishing an article by John Nolte which attempted to draw an equivalence between the LGBT pride flag, which was found in Flanagan’s apartment, and the Confederate flag. Nolte wrote that the “gay pride rainbow flag…is seen by many as a symbol of anti-Christian hate,” and must be taken down.

And in an even more ludicrous hot take from that same year, FrontPageMag contributor Daniel Greenfield alleged that Tyrelle D. Shaw, an African-American who attacked four random women of Asian descent in New York City, was the “black version of Roof.” Shaw, angered over being rejected by the Asian women he fetishized, would walk up to them on the street and smash them in the face with a blunt object, but killed no one.

The truth is, neither of these violent criminals were the “black Dylann Roof,” and neither is Emanuel Samson. True, all things being equal one could make that argument for Samson. After all, in one case you have a white male gunning down African-Americans and in the other you have the reverse. But Samson murdered 1 compared to Roof’s 9, and has no manifesto to speak of at the moment. In comparison, Roof outlined his toxic beliefs in a lengthy manifesto and took pictures of himself waving the Confederate flag, posing with a handgun, and crouching on a beach with “1488” scrawled in the sand, making the optics very different.

And then there’s the racial backdrop against which Roof’s crimes must be viewed. This country was founded in racial inequality — something which the alt-right knows and understands clearly. Blacks were enslaved, their families were broken apart, and their descendants were similarly subjugated. Even after being freed, our laws mandated inequality, whether it was segregation or a white supremacist justice system that executed and imprisoned innocent African-Americans while letting white lynch mobs go free.

Indeed, from slavery and Jim Crow to mass incarceration and police brutality, our crimes are so numerous that they defy cataloging. And this is precisely why these crimes can never be comparable, as horrific as they both are. As early as 1818, white authorities stormed the church and arrested 140 “free Negroes and slaves” for defying South Carolina’s ban on black literacy. The church’s founder, Denmark Vesey, was put on trial and convicted for supposedly planning a slave uprising. Vesey and 34 others were hanged, and a white mob burned the church to the ground.

The church was both a symbol of black resistance and resilience, and a target of white terrorism. It is in this context that Roof’s crimes must be viewed. Roof chose Emanuel AME precisely because it is a historically black church, and his rampage should be seen as the latest in a long line of attacks held together by a common thread. The purpose of it was to start a race war according to Roof, but it was also to further scar and terrorize the black community. And it is this unequal history that makes these crimes fundamentally dissimilar.