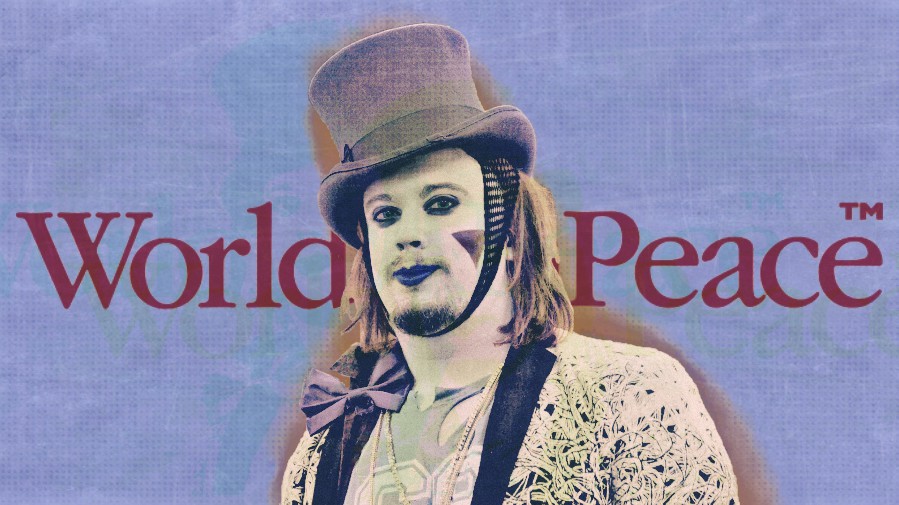 On September 18, 2017 notorious alt-right comedian and target of fake murder accusations Sam Hyde appeared on The Dick Show. Hyde, who makes a living off of bizarre and offensive stunts, is still reeling from the cancellation of his Adult Swim show Million Dollar Extreme Presents: World Peace, after which he lashed out at fellow comedian Tim Heidecker.

On The Dick Show, Hyde revealed that he (supposedly) wants to create his own brand of bodybuilding supplements. When asked what makes him “rage,” Hyde replied, “My upcoming supplement, ‘Bugsports Sam Hyde Mad Lion Anti-Gravity Rage.'”

He described the ideal graphic on the bottle as “me with a lion’s mane glued to my neck brace, and then a leash going from the neck brace to the owner’s hand which is also me.” When asked if he actually used this supplement himself, he flatly replied “no,” adding that “many people hopefully will.”

As with almost anything involving Sam Hyde there’s a decent chance this is all bullshit, like his rambling, nonsensical TED Talk. But selling crummy, overpriced supplements isn’t unheard of on the far-right either, as anyone who’s visited the InfoWars online store can attest to. Hell, Sam Hyde has been known to shill for Abacus Energy Pills, which, according to its website, are comprised of caffeine, B12, ginkgo biloba leaf, and L-Theanine.

Hyde also announced his intent to bring back his failed sketch comedy show. “I’m excited ’cause I think — I’m pretty sure I’m gonna self-fund World Peace Season 2,” Hyde said. “I have enough money to do it, I just don’t have the time right now, and I think it’s gotta be done. I think World Peace Season 2 has gotta happen.”