Last week, conspiracy theorist Alex Jones posted a video warning white Americans that they might be violently assaulted by African-Americans in certain U.S. cities. Jones hyped an incident in which a Colorado man with a high-and-tight haircut — the kind adopted by alt-right activists — was attacked and called a Nazi by a stranger to prove his point.

Well, that and some widely debunked statistics on race and crime. Jones rushed to his laptop and told his audience, “Just type into Google ‘black-on-white crime statistics,’ and you’ll get this from the federal government.” Jones then pulled up a Google image search for the phrase and found this chart: 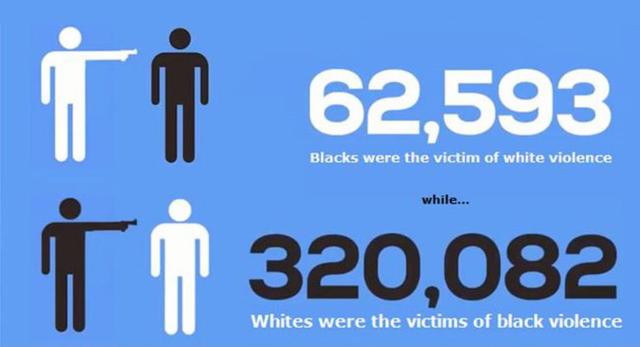 The original chart runs for several panels and concludes that, “Blacks commit 25x more violent assaults than whites do against blacks.” It cites the 2010 National Crime Victimization Survey as the source of the data it used. “25 times more likely — less likely — for a white to attack a black,” said Jones incredulously.

“Now these are real numbers,” he continued, “I’m not bashing all black people, but I grew up to not be a racist, and then I was wonderin’ why big, black guys kept attacking me. Well, that was ’cause they were racist black guys in Dallas and were in gangs.”

One of the problems with simply doing a Google search for something as inflammatory as race and crime statistics and simply repeating everything one sees is that you’ll often end up with biased conclusions or outright hoaxes. And this case is no exception.

The 2010 National Crime Victimization Survey is online and readily available from the Bureau of Justice Statistics website. The NCVS has quite a bit of data in it, from the rate of violent crime as a whole (which is in decline) to the race, sex, and age of the victims. What it does not show, however, is the perceived race of the perpetrators.

The last time the NCVS included a table that broke down perpetrators of violent crimes by race was 2008. NCVS Table 42’s misleading statistics on race and crime have fueled white supremacist talking points on a supposed black-on-white rape epidemic. However, since it was never used in the 2010 NCVS there’s no point to debunking it yet again.

The bottom line is that the data this chart supposedly uses to prove that black men are 25 times more likely to commit violent acts against whites than the reverse doesn’t appear in the report it cites. No matter, since Jones quickly moves from this bogus chart to another. 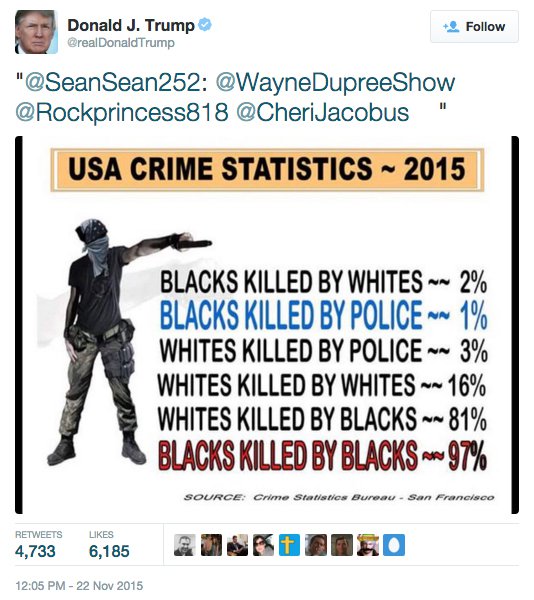 The chart, which shows a picture of a black man in a face mask and bandanna pointing a gun, cites the non-existent “Crime Statistics Bureau” for its numbers, and wildly overstates the percentage of white Americans killed by African-Americans. The FBI, which actually collects that type of data, states that the percentage of black-on-white murders was 15% — nowhere near the figure from the meme.

In 2015, then-presidential candidate Donald Trump was widely criticized for sharing the meme, which multiple fact-checkers quickly determined to be false. Unsurprisingly the meme reportedly originated with a Neo-Nazi Twitter account.

Jones continued his rant, downplaying incidents where African-Americans are murdered by law enforcement and complaining that “you don’t have black groups talking about vaccines, and blacks getting forcibly injected, or the abortions — gettin’ rid of half their population or more.” And he claimed that there are “a lot of great black people,” but that too many have had their heads filled with “anti-white racism.”

And the InfoWars host claimed that the media has been downplaying Islamic terrorist attacks, while “one woman getting run over by a guy who turns out is an Obama supporter, the guy leadin’ the thing was an Obama supporter, a Black Lives Matter leader, an Occupy leader, the other white supremacists tied him with the groups.”

This is also false. James Alex Fields Jr., the driver who fatally struck Heather Heyer, is a Republican and a Trump supporter who was obsessed with Adolf Hitler since his high school years. And Jason Kessler, the organizer of the Unite the Right rally, was once a liberal according to a Southern Poverty Law Center profile, but changed his political views radically in 2013.