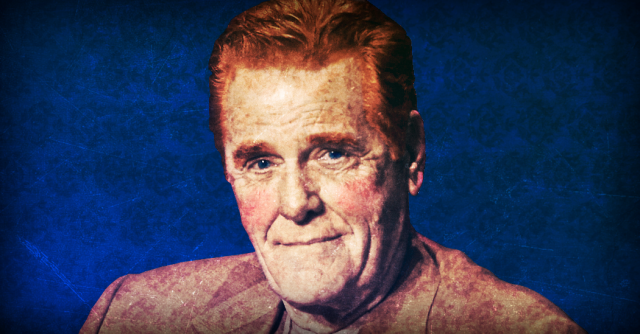 On Memorial Day, Chuck Woolery — one of America’s most famous game show hosts — caused a firestorm by tweeting an anti-Semitic comment linking Soviet Communists to Judaism. And I know what you’re thinking: “Chuck Woolery? Wasn’t he the guy who made a joke about Jewish women and AIDS in Roger and Me?” Actually, no, that was Bob Eubanks.

And he’s also not the guy who (jokingly) accused people who believe in global warming of being “unpatriotic racists.” That was Pat Sajak. No, this is the guy who hosted Wheel of Fortune from 1975 to 1981 and Love Connection from 1983 to 1994.

Today he spends his time co-hosting a conservative podcast called Blunt Force Truth and attacking liberal snowflakes on Twitter. Which brings us back to the Memorial Day fracas. It seems that Chuck thought it was a good idea to tweet out his shocking discovery that Karl Marx, Vladimir Lenin, and “most of the original Soviet Communists were Jewish”: 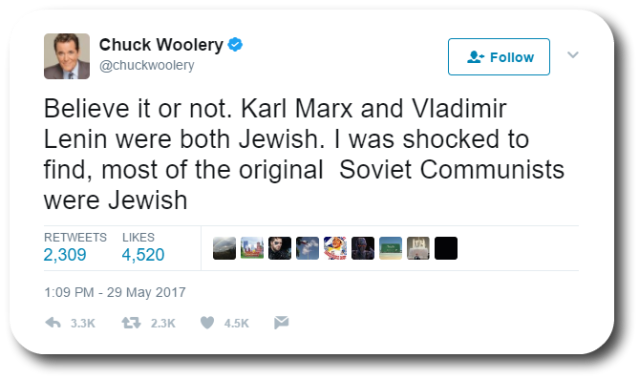 Marx certainly had Jewish ancestors — including his own paternal grandfather — but was not himself a practicing Jew, and has even been accused of anti-Semitism. Lenin’s Jewish roots are even more tenuous, but there is at least some evidence that his maternal grandfather was a Ukrainian Jew. Of course, if one follows the rule of matrilineal descent, Lenin certainly would not be considered Jewish — that status is passed on through one’s mother.

Nonetheless, the belief that the Western world is being threatened by so-called “Judeo-Bolshevism” is an anti-Semitic canard with roots in the aftermath of the Russian Revolution. It was later popularized by the Nazi Party, which viewed Judaism and Communism as being inextricably linked. The Judeo-Bolshevism conspiracy persists to this day in Neo-Nazi and white nationalist circles, which probably explains the amount of support Chuck received from them on Twitter.

When it was pointed out that Marx was German, Titus Flavius replied that since Marx’s grandfather was a Rabbi, Marx “was a jew [sic].” R O M V L V S wrote that Jewish and German identities are mutually exclusive, advising people to “pick one”:

St. Frexit, who lists The Right Stuff in his Twitter bio, was a vociferous defender of the washed-up celebrity, tweeting out graphs that supposedly proved Woolery’s ostensible point about Jewish control:

He even begged people to stop “dehumanizing” the man:

Matt Murdock claimed that the Jews are collectively “responsible for far more deaths than Hitler” was, and that “Hitler was right”:

Lycurgus claimed that Jews are neither white nor European:

Tinkerbell (Nazis come up with weird Twitter names) justified Hitler’s crimes against the Jews by citing a single Jewish businessman who advocated for the sterilization of Germans in 1941: 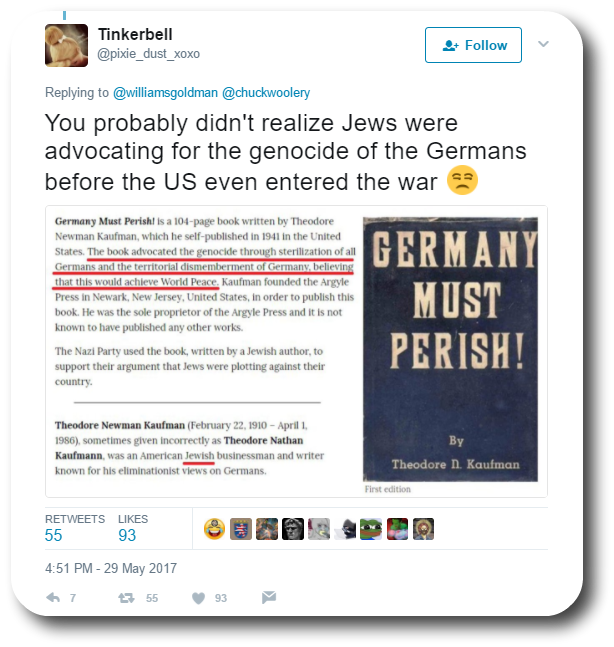 Another sarcastically called the link between Jews and Communism a “coincidence”: 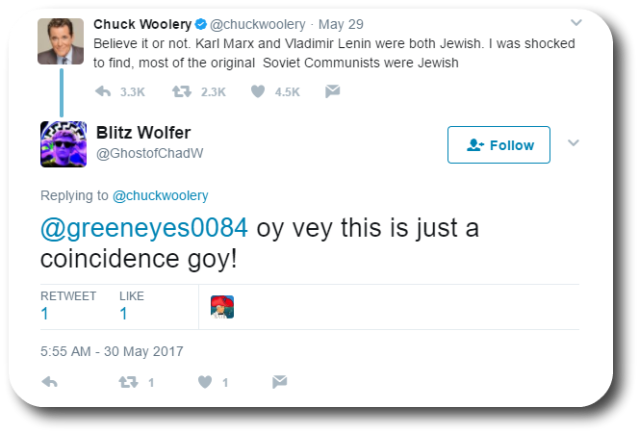 Then, after realizing he had dug himself into a hole, Chuck rather unwisely decided to dig in his heels, calling his previous assertions a “Fact of history” and asking why people were being so mean to him:

Once again, alt-right trolls swarmed to Woolery’s defense, giving him words of encouragement and advising him to post anti-Semitic memes and read Kevin MacDonald’s book The Culture of Critique: 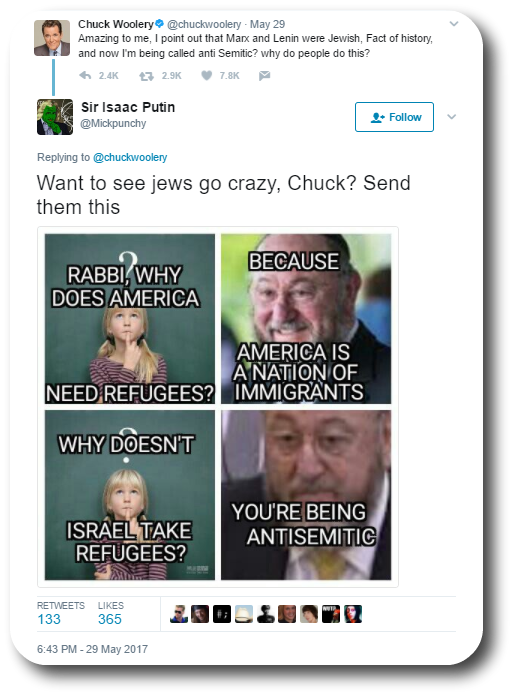 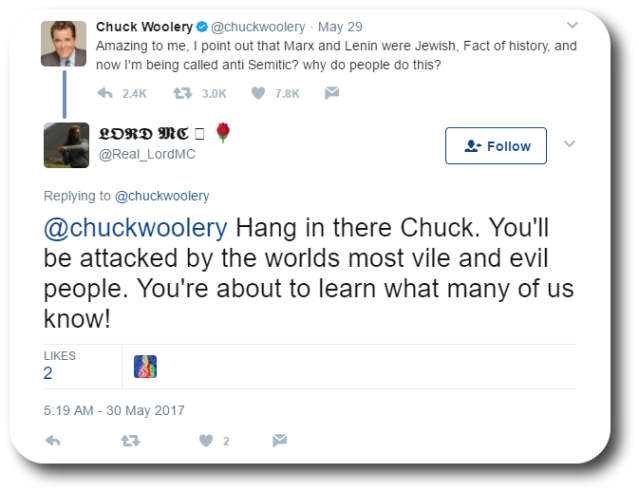 Other alt-right Twitter users supported Woolery’s comments, praising him for supposedly speaking the truth and attacking the “cucks” who criticized him: 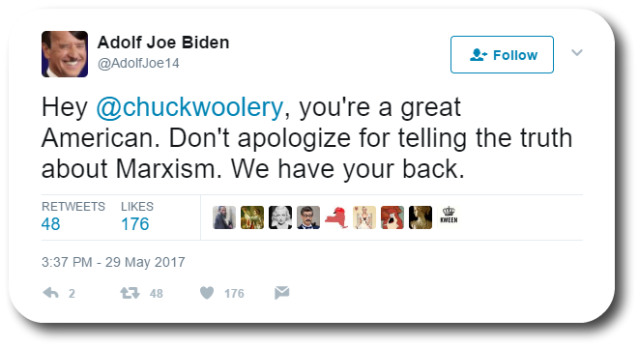 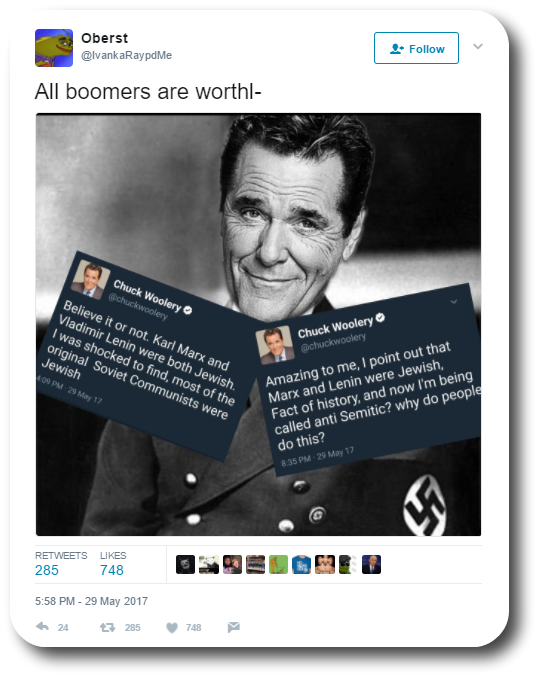 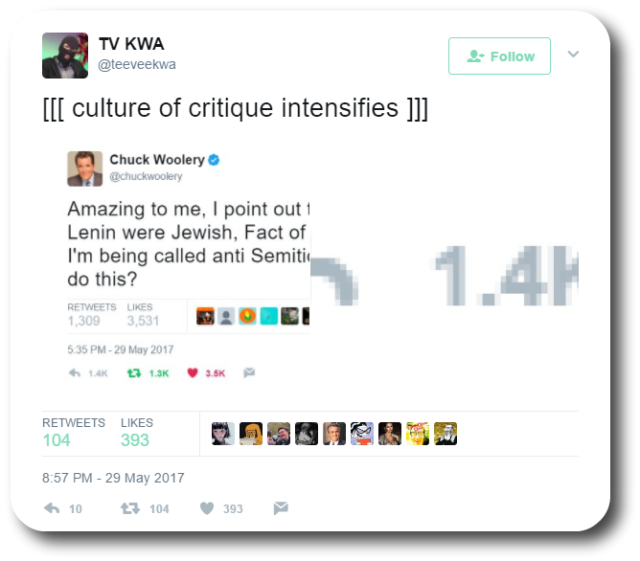 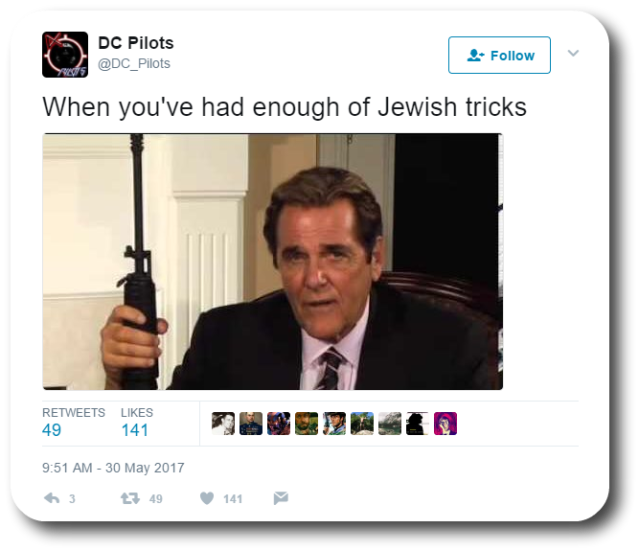 We’ll have to wait and see if this controversy has any impact on his part-time job of selling catheters on television.