On June 13, 2017, Virginians will vote to determine who among several candidates will face off in this year’s gubernatorial election in November. For the Democrats, the two candidates are Ralph Northam, the state’s current Lieutenant Governor, and Tom Perriello, a former U.S. Representative backed by Bernie Sanders and Elizabeth Warren. The Republican race is split between three candidates: Ed Gillespie, Frank Wagner, and Corey Stewart. So far it is Gillespie, the former RNC Chairman, who is favored to win the GOP primary.

Still, it is Corey Stewart who has been making the news as of late. Last year the 48-year-old Stewart was the Virginia chairman of Donald Trump’s presidential campaign, a position he held until October when he was fired for organizing a protest in front of RNC headquarters in Washington, D.C. Stewart was spurred to action amid rumors that the “establishment pukes” at the RNC were pulling resources from Trump’s campaign following the release of the infamous “grab ’em by the pussy” Access Hollywood tape.

And, in a very Trumpian fashion, Stewart is fond of making outrageous statements — he blamed the 2016 massacre of five Dallas cops on Hillary Clinton and Lt. Gov. Northam — and consistently flirts with the alt-right and neo-Confederate movements. Of course, unlike Trump, Stewart appears to have an understanding of these racist, far-right movements and associates with them in a manner that can only be described as deliberate.

The day he was fired from Trump’s presidential campaign, Stewart allowed himself to be interviewed by prominent conspiracy theorist and rape apologist Mike Cernovich. During the interview, broadcast over Periscope, Stewart accused the Republican establishment of “sabotaging” the Trump campaign and claimed to have “organized a couple of [sic] hundred women” for a demonstration against the RNC. Judging by photos of the event, Stewart shares the President’s inability to estimate crowd size.

“Look, we’re gonna keep in touch,” Stewart told Cernovich. “And I wanna work with you because, you know what? I don’t know what’s gonna happen on November 8th — I hope we win — but even if we don’t, this is a movement. It’s a movement to take back our Party and, ultimately, to take back our country.”

In March, Stewart came under fire for responses he gave during an AMA (“Ask Me Anything”) at r/The_Donald — a fervently pro-Trump subreddit. During the AMA session Stewart voiced his support for mass deportation of “illegal immigrants” and referred to Ed Gillespie as “the establishment’s handpicked candidate” and a “cuckservative” — the racist slur coined by Neo-Nazis that essentially means “race traitor.”

When confronted with the actual definition of the term, Stewart protested, claiming that it essentially meant Gillespie was a “Republican In Name Only” or “RINO.” This is false, of course. The cuckservative slur was birthed in the online sewers of The Right Stuff and My Posting Career — both white nationalist hubs.

And in the wake of the recent attempts to tear down monuments to white supremacy — including statues of Jefferson Davis and P.G.T. Beauregard — Stewart has found himself championing the lost cause of the Confederacy. Pulling down these statues, he said, is an act of “historical vandalism” on par with ISIS destroying ancient temples and artifacts. In one particularly ill-advised tweet, Stewart (who was born in Minnesota) wrote that “Nothing is worse than a Yankee telling a Southerner that his monuments don’t matter.”

So, as you can imagine, Stewart’s response to a mob of torch-carrying alt-right activists led by Richard Spencer to protest the removal of a Robert E. Lee statue in Charlottesville, VA was far from robust. As the Richmond Times-Dispatch noted in its coverage of the aftermath, the rally “drew condemnations from four of the five candidates running for governor in Virginia,” but “rare silence” from Stewart “who has made protecting the statue a key part of his campaign platform.”

In fact, Stewart eventually gave a speech on the matter called “It’s Time to Denounce,” in which he refused to condemn the white nationalists who descended on Lee Park and instead attacked “establishment Republicans,” “fake news,” “political correctness,” and Charlottesville Vice Mayor Wes Bellamy, whom he accused of anti-white racism:

There have been a lot of politicians denouncing things this weekend. And I would like to denounce a few things myself.

I denounce fake news, like the Washington Post, who lie to Virginians and use political correctness as a weapon to shame, ridicule and silence Americans.

I denounce weak establishment Republicans, like Ed Gillespie, who refuse to stand up for life, our 2nd Amendment and other constitutional rights, our heritage, and our President.

I denounce sanctuary cities, like Richmond and Fairfax County, who harbor MS-13 gang members and other illegal aliens who commit crimes against our families and take our jobs.

I denounce greedy corporate monopolies, like Dominion Virginia Power, who destroy neighborhoods and trample on our property rights.

I denounce Terry McAuliffe, who sits on his hands while working Virginians of all races, in all parts of Virginia, struggle as thousands of jobs leave our Commonwealth.

I denounce hypocrites, like Ralph Northam and Tom Perriello, who refuse to acknowledge the long history of racism within the Democratic Party and denounce racist Democrats like Wes Bellamy.

Alt-right activists praised Stewart on social media for refusing to “cuck” on the matter and sell them out.

He recently doubled down on his denials — that he’s a racist, that the Republican Party is a safe haven for racists, that he personally knows white supremacists, etc. In a Facebook live video posted shortly after his anti-denunciation speech, Stewart said, “The Democrats have played this game for a long, long time, folks. And that is they — first, do you remember this? 10 years ago it was the ‘war on women,’ the ‘war on women.’ Everything was ‘Republicans this, Republicans that,’ you know, declaring a ‘war on women.’ It was such a bunch of garbage. … And this time they’re talking about ‘white supremacy.’ Now I dunno about you folks, but I swear to God, I don’t know a single white supremacist. Not a single one.”

This, like his explanation of the “cuckservative” slur, is a transparent falsehood. In early April, for example, Stewart made an appearance at the Old Southern Ball held in Danville, VA. While there he gave a short speech standing up for the Confederacy’s symbols and military figures. Asking what it is that makes Virginia “so special,” he replied enthusiastically that it’s “the state of Robert E. Lee and ‘Stonewall’ Jackson!” He went on to declare that he is “proud to be next to the Confederate flag!”

At that same event, Robert Hines of the group Save Our Heritage officially endorsed Stewart for governor, joining the candidate on stage and stating that “we have a fighting chance to elect Corey Stewart and I suggest we do.” Stewart thanked Hines for his remarks. Hines has long been a figure in the neo-Confederate movement, having contributed for decades to the Southern Partisan, a magazine that once defended pro-slavery Representative Preston Brooks (D-SC) for his vicious caning of abolitionist Senator Charles Sumner (R-MA). Hines also sharply criticized former South Carolina Governor Nikki Haley, whom he derisively mocked as a “Sikh-Hindu governor,” for supporting a measure to remove the Confederate flag from the state capitol.

And that is far from an isolated example of Stewart’s white nationalist and neo-Confederate associates. As the blog Restoring the Honor points out, some of the volunteers for Stewart’s campaign were neo-Confederates with ties to known hate groups. Stewart was photographed with Donna and George Randall, avid readers of the hate site Occidental Dissent run by Brad Griffin. A Facebook photo shows the couple packing a pickup truck decorated with a Confederate flag and decals sporting the symbol of the League of the South — another racist hate group.

In addition, Stewart’s social media ties are also quite revealing. On Twitter, Stewart has had numerous interactions with Southern nationalists, alt-right activists, and hardcore anti-Semites, some of whom have ties to prominent white nationalist organizations. Stewart follows alt-right activist and blogger Jason Kessler, whose pro-Confederate rallies Stewart has attended in the past.

On his Twitter account Kessler has defended the alt-right’s torchlight protest in Lee Park from the media’s “hatred”:

And he has defended racism as mere “in-group preference”:

He’s also retweeted numerous white nationalists and racist articles, including one from Identity Dixie — a Right Stuff spin-off — that assails minorities as “pavement apes,” “jigaboos,” and “fags.” Lately though, Kessler has been experiencing some legal problems, having both pleaded guilty to assault for punching a man in the face and falsely claiming self-defense, and getting arrested at the Lee Park rally.

Stewart follows Wolfie James, a contributor to AltRight.com and author of an article called “7 Reasons Why Alt-Right Men Are The Hottest.” According to James, it’s because the alt-right is “largely composed of smart, virile chads who risk careers and relationships to save the white race.” She ends the article by stating that, “Alt-Right men have a purpose and drive greater than themselves, and that’s both undeniably white, and irrefutably alpha.”

She’s tweeted a racist comic that condoned segregation and warned people about the “white genocide” myth:

She’s shown support for the torchlight protest in Lee Park, which she called “step 1 of when the white man gets angry”:

And she’s promoted anti-Semitic conspiracies about Jewish elites who “have regained control in DC”:

Another account Stewart follows is that of the DC Pilots, an alt-right account that links to The Right Stuff in its bio:

In one tweet DC Pilots ask about a song played during a recent episode of The Daily Shoah, one of the main podcasts on The Right Stuff:

And they lauded “based” Corey Stewart for refusing to “cuck out” and disavow the alt-right:

Johnny Rico is another alt-right Twitter personality that Stewart follows, and is the second to proclaim a connection with The Right Stuff:

Rico has sent out numerous homophobic messages, such as this one accusing a Democrat of having GRID (Gay-related immune deficiency), the antiquated term for AIDS:

He also wrote that African-Americans “are incapable of civilization or basic standards of decency” and only brought “rape and fried chicken” to the U.S.:

And he follows OldAtlantic, who describes himself as a “Founding Stock American” and a Protestant and links to a blog called Old Atlantic Lighthouse. The blog shows posts as far back as 2006, and has posts pushing conspiracy theories relating to the NWO (“New World Order”) and numerology. In a post from November 4, 2016, the blog’s author wrote that ancient “Semitic priests” used the slave trade to transport “Blacks into the Middle East, North Africa and then America and now Europe as part of their race mixing plan to eliminate Whites.”

Stewart has had at least some interaction with OldAtlantic on Twitter. When another alt-right Twitter user named Pale Horse announced his support for Corey Stewart, OldAtlantic replied to it by calling him “the Le Pen of Virginia,” a comment that Stewart “liked”:

One wonders what Stewart thinks of OldAtlantic’s other tweets, such as these:

And here’s a couple more “likes” of white supremacist tweets: 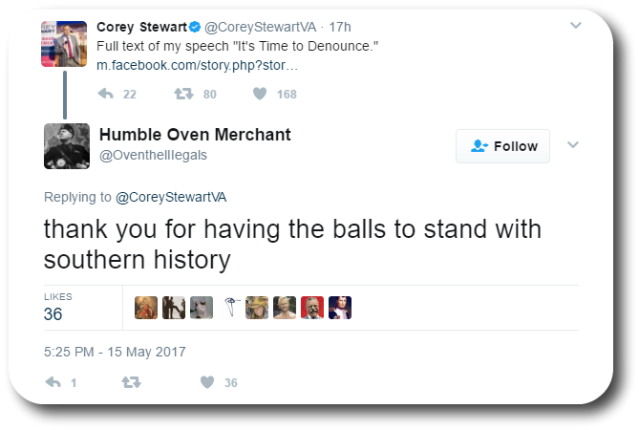 These Twitter contacts are just the tip of the iceberg. And while, perhaps, critics could fairly point out that simply following white nationalist accounts is not indicative of one’s personal beliefs — journalists follow all sorts of conspiracy theorists, bigots, and extremist politicians on Twitter — it is certainly odd that he would follow them and “like” their tweets.

Taken together, Stewart’s associations, his pro Confederate beliefs, his use of alt-right terminology, and his refusal to condemn prominent racists paints an ugly portrait of the Republican candidate. Perhaps he’s really one of them after all.