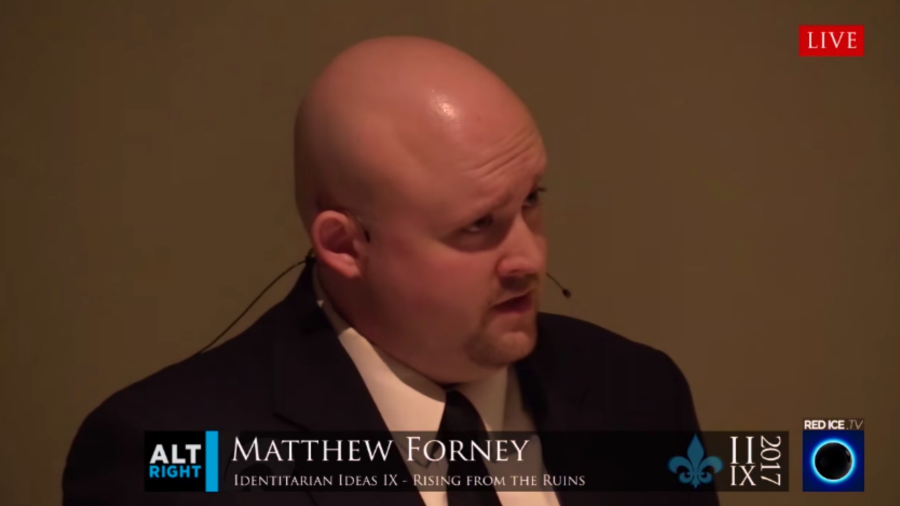 At the recent Identitarian Ideas IX conference in Sweden, one of the more unorthodox speaker choices was Matt Forney. After all, Forney, the racist pickup artist and domestic abuser, has spent years boasting about sleeping with Filipino women — though I suppose that hasn’t stopped fellow skinhead Andrew Anglin from being accepted in white nationalist circles either.

Forney gave a speech on Donald Trump and white identity politics in the United States, telling the audience, “I don’t think I need to remind anyone that the election of President Donald Trump was a turning point in American and European history.”

The ruling class, he said, has spent decades telling conservative whites that “we were on the losing side of history,” and that the future of their civilization was to consist of “fruits Frenching their boyfriends in front of empty churches,” mosques in the cities their “forefathers labored to build,” and “swarthy foreigners” who eye “our sisters, wives, and girlfriends the way lions stare at gazelles.”

The election of 2016 changed all that, he said. As Forney put it, the “moral arc” of the moral and political universe had been “redirected” now that the mainstream Republican class had been destroyed. These “cuckservatives” were the “primary impediment to real nationalist change in the West.” “It’s your National Reviews, your Weekly Standards, your Rich Lowrys, and Rick Wilsons, and rich finks in general who have lost everything in the God Emperor’s ascent,” he boasted.

I don’t think I need to remind anyone that the election of President Donald Trump was a turning point in American and European history. For our entire lives our overlords in the government and media have told us that we were on the losing side of history.

That we were destined to fail. That the future of our civilization was rainbows, unicorns, and chocolate chip cookies; fruits Frenching their boyfriends in front of empty churches; neon-lit mosques eclipsing the cities our forefathers labored to build; and finally, being finessed out of our neighborhoods by swarthy foreigners who stare at our sisters, wives, and girlfriends the way lions stare at gazelles.

But for now, the arc of the moral universe has been redirected. The arc of the political universe has also been redirected. One of the most important achievements of the past two years has been the total destruction of the mainstream American right-wing. My friend Edwin Oslan calls them Conservatism Incorporated. We on the alt-right call them cuckservatives. But regardless of how we [abuse] them, they were the primary impediment to real nationalist change in the West.

It is they, not the Left, who are the biggest losers in the age of Trump. Right now, the Left is so excited about the prospect of “resisting” the President, that they almost seem sexually aroused by it. It’s your National Reviews, your Weekly Standards, your Rich Lowrys, and Rick Wilsons, and rich finks in general who have lost everything in the God Emperor’s ascent.

Forney complained that being white means being “the world’s whipping boy,” since white people are “blamed for everything” including pollution, poverty in Africa, and manspreading. What’s even worse, he claimed, is being a straight, white male, “because you’re told that your natural masculine instincts…make you an oppressive misogynist.”

He then attacked transgender children who “become a funhouse mirror version of the opposite sex” and affirmative consent laws which can, apparently, get a man accused of rape for kissing one’s wife. And according to Forney, poor, underprivileged white men have been “pursued” by the Left and given “no place to call their own.” Except, of course, bars, most college campuses, businesses, the military, and the halls of Congress.

Nevertheless, Forney believes that white men have nothing, not even video games which have “long [been] the province of virginal nerds.” He referred to 2014’s Gamergate movement as “he first successful backlash against cultural Marxism in most of our lifetimes” and the moment the “white man of gaming” saw Leftists and feminists trying to take away their precious hobby. (See, it only took three years to abandon the pretext of “ethics” in the gaming industry.)

And, as with Gamergate, white men in swing states had grown tired of being “pursued” by the Left and minority groups, and of being talked down to by “liberal arts dilettantes in Brooklyn brownstones” who openly despise the “stupid white rednecks” of Kentucky, Michigan, and Pennsylvania.

“White Americans saw this repulsive display and they said, ‘No more! Enough! This line you shall not cross!” shouted Forney. And these white rural Americans came out to vote for their “champion,” a man who — although not alt-right — brought a return to nationalist politics and a sense of white identity.

To be white is to be the world’s whipping boy. It means being blamed for everything, from poverty in Africa to environmental degradation to women not having enough space to sit down on the subway. It means being told to shut up and sit down. That your opinion is worthless because of your privilege. And that the eventual disappearance of your people and culture is a sign of progress.

To be white, straight, and a man is even worse because you’re told that your natural masculine instincts, your natural desires to bed and wed women, make you an oppressive misogynist. [In a] 21st century parody world, 6-year-olds are allowed to take dangerous hormones so they can become a funhouse mirror version of the opposite sex. But not asking your wife for permission before you kiss her can land you in prison for rape.

And if you’re not happy with this arrangement, you’re expected to satiate yourself with degenerate Japanese cartoons and pornography — the bread and circuses of a globalist empire. That’s how mad the Marxists are. They don’t merely want to destroy our culture and identity. They want to destroy the very things that make us human.

Sun Tzu stated that when you have surrounded your enemy, you must give him a way to escape, or else he will fight you to the death, having nothing to lose. The Left never learned that lesson, because they pursued whites — white men — everywhere they’ve gone, leaving them no quarter and no place to call their own.

Even video games, long the province of virginal nerds, were not safe. Which is what sparked the Gamergate movement three years ago — the first successful backlash against cultural Marxism in most of our lifetimes. The white man of gaming saw Leftists trying to subvert their favorite hobby, one they retreated to after society rejected them, and they said, “No more. Enough. This line you shall not cross.” It was this spark that ignited the pile of TNT that was the Trump campaign and the alternative right.

The average Trump voter isn’t explicitly aware of all the issues that we are versed in. They don’t know everything that we know. But they know, deep down, that something is wrong. They know that 50 years of mass non-white immigration and globalist free trade have ruined them financially, and placed their lives and that of their children in peril.

And they see, day in and day out, the chattering classes tell them that they are the problem. They see liberal arts dilettantes in Brooklyn brownstones, rents paid courtesy of daddy’s credit line. Banging out think pieces everyday. Claiming that all the world’s ills are thanks to those stupid white rednecks in Kentucky, Michigan, or Pennsylvania. And as soon as they kick the bucket and give way to all these new Americans from Mexico, Africa, and the Middle East, we’ll all be better off.

White Americans saw this repulsive display and they said, “No more. Enough. This line you shall not cross.” And they turned out to support a champion who would fight for them. Donald Trump is the first politician in years who treats white Americans as a group with interests of their own. Interests that are worth defending. While he is far from the alt-right ideologically, Trump’s nationalist presidency is aiding the maturation of white America from an empty consumerist frontier into a people with an identity of their own. One that runs deeper than pop culture effluvia and waxing autistic about muh Constitution.