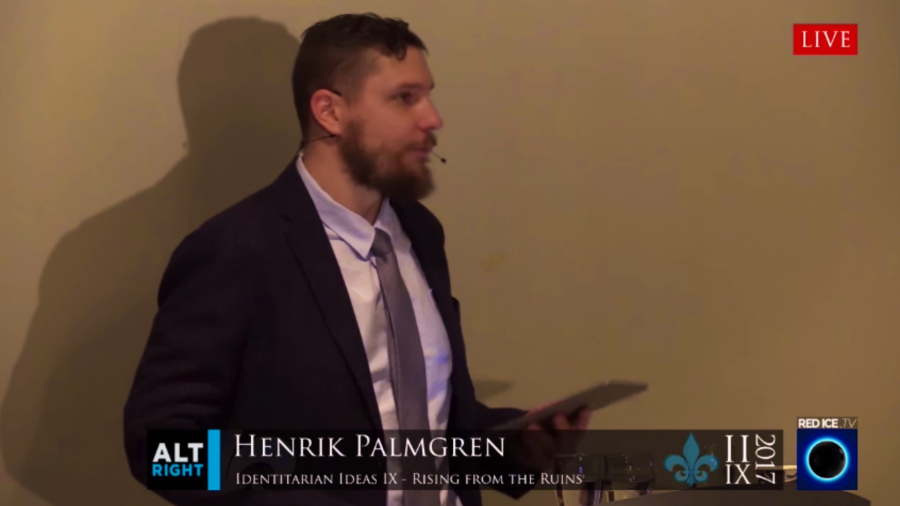 Citing absolutely nothing, and constantly keeping his eyes down to read from his script, Palmgren claimed that “some estimates are as high as…fourteen-hundred percent, and said “we didn’t have these levels of crime in Sweden before immigration.”

Moreover, Palmgren asserted that “this change in the criminal landscape in Sweden is not attributable to a drastic change in the introvert nature of most Scandinavians,” but rather a result of a “rapid demographic change.”

There is nothing to back up the claim that crime has risen by fourteen-hundred percent in Sweden, or an unprecedented crime wave by immigrants.

As Vox points out, while, historically, “immigrants to Sweden do commit crimes at higher rates than the native-born,” there was “no significant uptick” in threats, harassment, fraud, assault, mugging, or sexual offenses between 2005 and 2014. (Since the murder rate was infinitesimal it was not included.)

And the rise in reports of rape increased so drastically because Sweden expanded the definition of rape and “started counting each instance of sexual violence as a separate attack.”

So Palmgren’s assertions are far from being “just a fact.” But Palmgren continued to defend Donald Trump from his “fakestream news” critics. He accused those media outlets and the Swedish government of not only “lying,” but of “covering it up.”

He said that he and the other attendees were just “expressing our concern with the fact that our government is lying,” but that “because we live in a liberal, multicultural, socialist utopia here in Sweden they have to reinforce this image all the time that things are great.”

So increase in crime is through the roof in Sweden. Some estimates are as high as, what, fourteen-hundred percent since a few years back? And the fact is we didn’t have these levels of crime in Sweden before immigration. It’s just a fact. But since the Swedish state doesn’t keep statistics on crime by ethnicity, it becomes occasionally difficult to get this point across.

And it’s difficult for people to realize that this change in the criminal landscape in Sweden is not attributable to a drastic change in the introvert nature of most Scandinavians. It’s a very — and it has been a very — very peaceful country. Maybe even too peaceful. So it’s only with rapid demographic change that this behavior is starting to change.

So what happened is that CNN, and other fakestream news outlets, media, had on all kinds of people on their shows discussing why Trump was wrong and why what he said wasn’t true. Several guests even made guarantees and ensured us [sic] that everything is as it should be in multicultural Sweden. Don’t worry. And also in other European countries that he was referencing, that has this diversity edict, this religion forced on them.

So the response from our politicians — the State Department, the Swedish Embassy in the U.S., and our Prime Minister — was one of disbelief. Everyone was perplexed, and said “We have no idea what he’s talking about. What is this?” So even an ex-prime minister, the Bilderberger [sic] Carl Bildt, even went so far to accuse Trump of smoking something in one of his tweets.

So as a consequence of this disingenuous reporting, lies, people think that all of this is fake — the general people out there. That our concerns are not real. That we’re making all of this up. And Trump is making it up. It’s all fake news. So other replies to Trump, that I saw, included, “Are you saying that the Swedish government is lying?” Right?

So they have now begun to channel the spirit of the good old days of Pravda. Only the state disseminates the truth. And you objecting to it is not doubleplusgood. So never in human history has a government lied to its people, right? It just doesn’t happen. So obviously the answer to this is pretty simple: Yes, they are lying to us. The government is not only lying, they’re covering it up. Actively.

So despite the fact that CNN and most liberal press outlets in America criticizes official statements themselves coming out of the White House and their government, basically, with Trump in it now, they’re too blinded to realize that we are just simply doing the same. People like us in this room. We’re also expressing our concern with the fact that our government is lying, just like they are. But again, because we live in a liberal, multicultural, socialist utopia here in Sweden they have to reinforce this image all the time that things are great.

Palmgren brought up the case of a Swedish police officer from Örebro named Peter Springare who posted an angry Facebook rant against Muslim migrants. An inquiry was launched into whether Springare had incited racial hatred with the post, but ultimately no charges were brought against him. According to Palmgren, Springare was only guilty of discussing the “absolute horrible conditions that the police have to endure in diversity-ridden zones.”

He once again accused the Swedish government of covering up migrant crime, and the use of taxpayer money to “pay for this crazy multicultural party that they have got going on here.” He said that this “cover-up” even extended to police prohibiting people from showing photos of the flowers the 61-year-old Springare received from his fans.

He attacked Dagens Nyheter, a major Swedish newspaper, for criticizing him and his fellow white nationalists. “Well, to the establishment and their lackeys and the cheerleaders in the fakestream media, it’s you and me and people like us here who are the problem,” Palmgren complained. “Not the problems itself. Not this insane, radical immigration policy that is plunging our country and the European continent — and America — into chaos.”

Palmgren then excoriated the “libtards” whom he accused of “undermining our society and our security and the future of our children.” The liberals, he said, are assisting non-white migrants in turning “the next generation of Europeans into minorities in their own countries.”

We also had a police officer, as we mentioned here earlier, out of Örebro. Peter Springare recently “came out” as a critic of multiculturalism, posting sincere diatribes on Facebook. And all against the orders of his superiors, of course. All he was simply talking about was the absolute horrible conditions that the police have to endure in diversity-ridden zones.

He also discussed the losses that our society’s taking on other fronts as consequences of the enforcement of the multicultural utopia. Such as the pressures on schooling, the crumbling healthcare system, the collapse of the infrastructure, the lack of dwellings for new Swedes that are supposed to start up their life, get a family going, who end up in a kind of arrested development because the state prioritizes the “recently arrived,” as the new PC speak goes.

So what’s the response to all of this, with Trump and all that stuff? Well, it’s cover-up of course. It’s a denial. Police made it forbidden to even show photos of the flowers that came in in support of Peter Springare, the police officer — came in from all over the country. And he was actually investigated for a hate crime, consequently.

Malmö, for example — one of my favorite immigrant [mathematicians], he’s an economist, he’s the…third biggest city in Sweden, Malmö — Malmö had fifty-two hand grenade attacks in 2016 alone. That’s a jump from forty-eight attacks in 2015, according to the figures provided by the Swedish police authority. So this is the new normal, right? We just have to adjust to this.

And all of this goes on as Dagens Nyheter — or Today’s News — attacked Daniel Friberg, myself, Tor [Westman], ultimately you for attending a conference like this. They’re attacking us while they have their own reporters and photographers assaulted in Rinkeby just the other night, during these riots that Trump kind of predicted in a Kekian fashion.

So fifteen people came up and kicked and punched this photographer. They stole his camera. He ended up spending the night in [a] hospital in complete shock. He was just out to cover these riots, and probably even from kind of a semi-supportive perspective, right? Doesn’t help.

Crime has gone down this year in Sweden, one liberal pointed out to Trump after his comments. And this is how they think, right? So, one point down on the chart after twenty years of a massive increase of how many endless points up, right? So it’s now progress and signs of improvement that it’s just slightly gone down from a little bit from before from the previous year. They cannot imagine that these twenty years of increased crime and open borders shouldn’t have been at all, right? They are trying to argue that two steps forward and one step back is not actually taking us forward, towards the cliff.

And all of this is happening as another gang rape here in Sweden was livestreamed this week. Business as usual. Well, to the establishment and their lackeys and the cheerleaders in the fakestream media, it’s you and me and people like us here who are the problem. Not the problems itself. Not this insane, radical immigration policy that is plunging our country and the European continent — and America — into chaos.

No, we are the problem. We’re the dangerous ones. Not the libtards that are undermining our society and our security and the future of our children. Who is rapidly turning the next generation of Europeans into minorities in their own countries. Us bringing information together, connecting the dots, seeing a pattern — that is the problem. Pointing out how they are failing, and the Pravda establishment is going belly-up now, that makes us a dangerous element in their eyes.