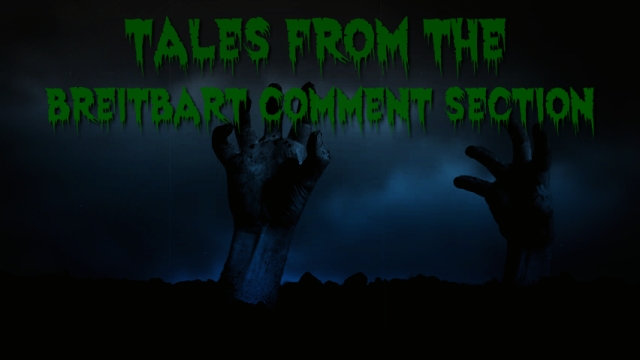 Former Breitbart News CEO (and current White House Chief Strategist) Stephen Bannon recently said that the best things about his website were the comments section and the callers. In honor of those remarks I’ve decided to revisit the racist, homophobic cesspool that is the Breitbart comments section.

A few days ago Breitbart News posted an article calling Somalis the “least educated” refugees to arrive in the U.S. in 2017. The article blamed Somali immigrants for depressing wages and taking jobs in the meat packing industry from natural born U.S. citizens. The Breitbart readers responded in kind, calling for their deportation and labeling them Third World savages with low IQs.

Many commenters denounced them as a “burden,” “filth,” “savages,” rapists, and “animals” — but they’re not racist or anything:

El Sloppo (great racist caricature as your avatar, dude) claimed that Obama is purposefully “seeding conservative white Christian communities all over the nation” with non-white, non-Christian refugees in order to “topple the apple cart,” so to speak. Meanwhile, Rick Jones referred to them as “savages” and “parasites”:

There was the usual race and IQ bullshit, including commenters who claimed Somalis “have an average IQ of 67” and “light bulb shaped heads”:

Congrats to Grammaton Cleric for waiting 8 years to make the dumbest Obama pun ever:

Sam Crow, who’s totally Yale material, says our “retarded” President is taking in “every brown skin poor person on the planet .” Oh and “Somalis have the lowest IQ’s on the planet next to Aborigines”:

This commenter starts out by calling Somalis “APES” and then segues into a copy-paste rant about race and IQ:

Anyone can make up grafts! Fake statistics too!

In another related article, Breitbart claimed that Obama “drops 502 refugees on Nebraska” — per the article’s title. (The website’s URL actually uses the word “floods” instead of “drops.”)  Yeah, that Obama, always dropping refugees in the middle of lily-white states just to mess with folks.

In the top comment with 347 upvotes (as of the time of the screen capture), BigDave Deplorable said they should go “straight back where you came from.” AmericaIsGreatAgain, whose avatar is a bald eagle in a Trump wig, replied by suggesting they be rounded up and put in camps:

BigDave also said some stuff about how “Muzzzie” children will all grow up to be suicide bombers, but I keep imagining that furry, green creature who teaches children how to speak French: 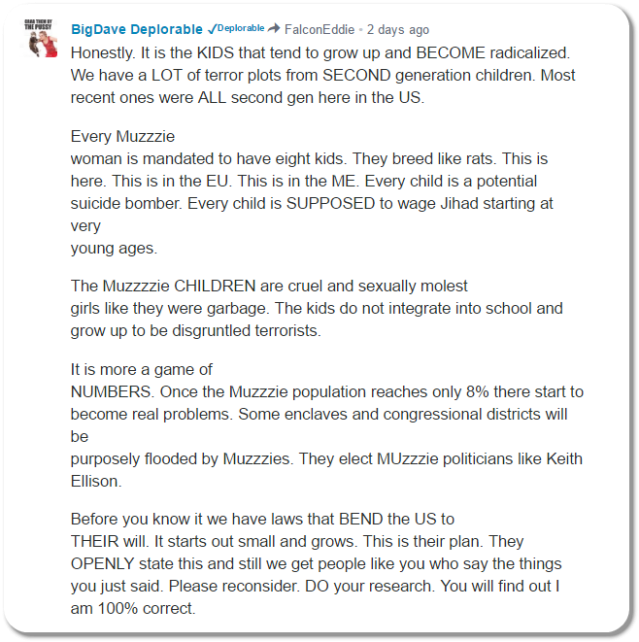 There was also the usual trash about the refugees being “colonizers” and Islam being a violent “cult”:

Some of them were obsessed over birthrates, with drperry ludicrously claiming that “They promise to conquer us with their wombs.” Womb warfare, I can’t believe we never saw it coming. The saddest part is that they clearly don’t care about the “children” being “kill[ed].” They’re just afraid of being outnumbered by brown people.

DP111 lamented the fact that the U.S. didn’t exploit the 9/11 attacks to expel Muslims:

Two deplorables couldn’t decide if we were in the midst of a jihad or a race war:

And several couldn’t agree on what Obama is: a Muslim, a Communist, a racist, or a narcissist. Thank goodness Film-Buff managed to settle it:

And there was the familiar, genocidal rhetoric about Muslims being similar to roaches:

Truly Steve Bannon would be proud.