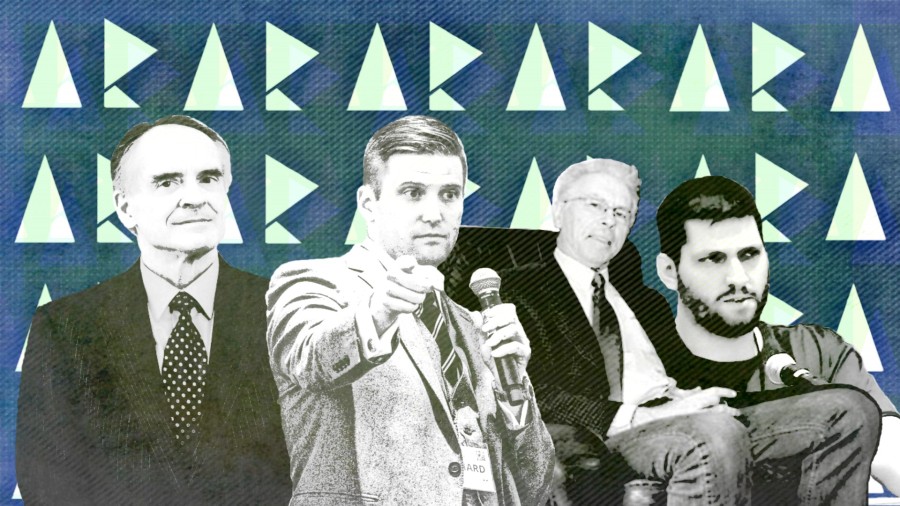 After Peter Brimelow’s speech on “Trump’s America” the 2016 NPI conference, Brimelow joined fellow white nationalist leaders Jared Taylor and Kevin MacDonald — as well as alt-right YouTube personality “Millennial Woes” — for a panel discussion, before opening up a Q&A segment with the audience.

One woman, who declined to be identified, asked AmRen’s Jared Taylor about the recent spate of anti-Trump protests and, in some cases, riots taking place across the country. Apparently believing the woman was referring to the protests against the killing of unarmed black men by law enforcement, Taylor immediately launched into a diatribe against the Black Lives Matter movement.

“As I have been explaining as patiently as possible, the fact that fifty, sixty years after this so-called glorious achievement of the Civil Rights movement, we still have race riots,” he said. “What does this tell us about this attempt to build a society in which race can be made not to matter? To me, it is the Black Lives Matter movement, it is Trayvon Martin, it is Michael Brown, it is the riots in Ferguson and Philadelphia. These have woken up otherwise, more or less, satisfied white people far more than Donald Trump ever did.”

These events, said Taylor, are “driving people into the alt-right” and into a “kind of sustained racial dissidence.” He also seemed to support a reaction from the Trump administration to these riots which would culminate in a “kind of racial grinding of the gears” which could show the futility of trying to create a society free of racial differences.

Brimelow then seized the mic for himself, and pointed out that the audience member might have been asking about the protests of Trump’s electoral victory. Brimelow recalled receiving an email the night of the election by a Daily Beast reporter asking about the possibility of pro-Trump riots if he had actually lost.

“And I said to him, yeah, I wrote back and said this is a chimera, a ridiculous chimera invented by the projecting Left. There’s far more chance that Hillary supporters [would be] rioting. In fact, they already have been killing policemen. Look it up.” There is certainly no word on where there have been instances of Hillary supporters murdering members of law enforcement, nor did Brimelow give any specifics on his claim.

Another audience member asked the group about the media, whose credibility “took a huge hit” this election. His question, as it turns out, wasn’t how the media could regain its credibility — arguably a far more useful goal for American society — but rather how trust could be further eroded.

Kevin MacDonald decided to jump on this question, calling Trump’s victory a “populist revolt” against the establishment — both the political establishment and the media establishment. MacDonald also cited the mainstream media’s insistence on calling Trump a “racist” and a “bigot” to little or no effect as evidence that these words no longer hold power.

Oddly enough, while many people are discussing distrust of the mainstream media and the prevalence of “fake news,” MacDonald also parroted a claim that the New York Times apologized for its coverage of Donald Trump. Trump himself made this assertion via Twitter on November 13th, in connection with a statement put out by the newspaper company calling their polling forecasts a “disservice” to both the president-elect and the voters.

As PolitiFact noted, “it’s a stretch to say the letter’s line about an inaccurate prediction is an admission of ‘bad coverage’ of Trump overall, nor is it an apology.” They ultimately gave his claim a rating of “False.”

MacDonald also boasted of the alt-right’s decision to rally behind Trump, stating, “We were the only group — the alt-right — that were consistently supporting him, had a well-grounded intellectual perspective and so on. So it’s a great victory for us.”

Going forward,” he continued, “I think we have to hope that we can continue to increase our presence in the media.” He recommended that, since the alt-right was the only group supporting Trump, news outlets such as CNN and FOX News should be interviewing them.

“I would say that the media are continuing to discredit themselves in the most spectacular way,” Taylor chimed in. Criticizing the coverage of Steve Bannon’s appointment, Taylor called journalists such as Esquire‘s Charles Pierce “fools” who “don’t know shit from Shinola.” Millennial Woes agreed, comparing coverage of Trump to that of Brexit and saying that journalists “have learned nothing. And thank God for that.”

Another audience member asked whether or not the media’s linking Steve Bannon, and to a lesser extent Donald Trump, would backfire and serve to normalize the alt-right’s views. After all, Bannon, the former head of the far-right website Breitbart News, calls himself a “nationalist” (though not a white nationalist), is an alleged anti-Semite, and boasted of Breitbart being a “platform for the alt-right.”

Richard Spencer himself indicated that he agreed with the premise of the question, saying he believes “it will have that effect.” While he “definitely” does not think the late Andrew Breitbart, his media empire, or Steve Bannon himself are “alt-right as we would define it,” he believes “people are being pushed into the same boat.” Either that, or they’ll “go full cuck” and start supporting establishment Democrats such as Hillary Clinton.

Taylor echoed the earlier claim by MacDonald that the repeated use of labels such as “racist” are slowly losing their impact to the benefit of the alt-right. The short term impact will force Trump and Bannon to act carefully, but the media, he said, have “unloaded their dictionary of insults” on people “who do not deserve those insults.” The long term effect of this, he predicted, will be that “people like Bannon or Trump will be open to the clarity of our ideas.”

Later, Spencer kicked off a Q&A with the lügenpresse with a small speech on free speech rights and the European origins of the United States. Spencer called Trump’s presidential campaign “the first step towards identity politics in the United States,” but maintained his position that neither Trump nor Bannon themselves are alt-right. Yet Spencer did go on to claim a sort of “psychic connection” of sorts to Donald Trump.

Spencer made no mention of the people who lived here prior to their arrival, nor did he bring up any of the folks brought here against their will to actually build this nation, but perhaps he’s saving it for another speech.

Finally, a reporter with NPR posed a question to Jared Taylor. Quoting at length from an article Taylor wrote — in which he cited approvingly the words of the late Chief Justice Roger B. Taney in the infamous Dred Scott decision to show that the United States was not founded by believers in racial equality — he asked why the media shouldn’t refer to Taylor and his ilk as “white supremacists”?

Taylor, looking bemused by the question, began by stating that “white supremacy is, presumably, the desire of whites to rule over other people.” And, since he and his alt-right compatriots have no desire to do so, they are not, by this definition, white supremacists. While it is true that several definitions of “white supremacy” include the caveat that white supremacists believe whites “dominate society,” it is also true that it is likewise defined as a belief in the superiority of whites.

For Jared Taylor, a man who believes generally in the intellectual superiority of whites over blacks and Hispanics, it would certainly not be much of a stretch to apply the first half of that definition to him. And, depending on whom you talk to, the section about dominating society might very well apply also.

Nevertheless, Taylor went on to call for the term being “completely abandoned from the contemporary vocabulary” because it is used to “discredit” those with “racial views that are even slightly heretical.” This vague definition only serves to whitewash, so to speak, the views Taylor holds, such as his belief that “[w]hen blacks are left entirely to their own devices, Western civilization — any kind of civilization — disappears,” as he wrote in the aftermath of Hurricane Katrina.

And, judging by our media’s ridiculous commitment to neutrality on the issue of racism, and a slew of softball, if not fawning, interviews with alt-right figures, Mr. Taylor and those like him will have little to worry about.