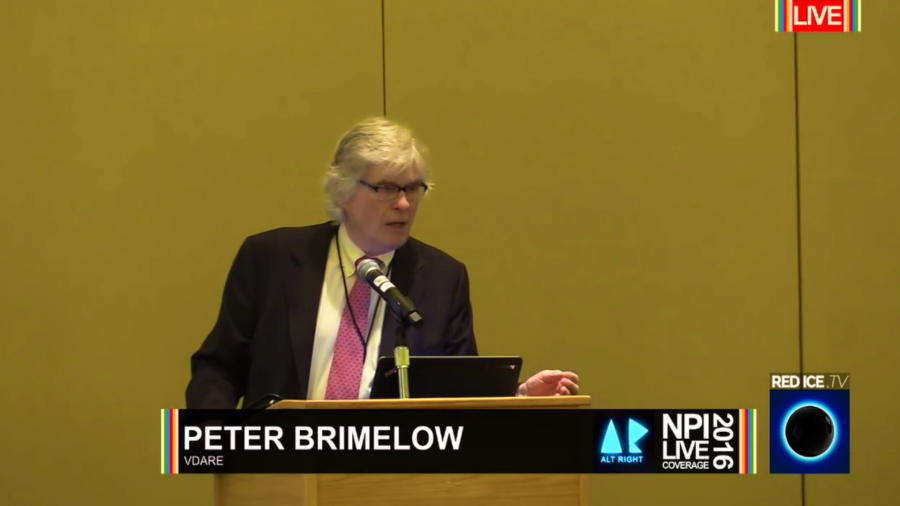 Brimelow joked that he “can’t claim to be a member, really, of the alt-right” because he’s “too damned old” and doesn’t “like haircuts” — an alt-right in-joke about adherents sporting “fashy” haircuts. However, he was quite willing to call himself a “god-uncle” of sorts to the movement.

Of Trump and soon-to-be chief strategist Steve Bannon, Brimelow said they “are not alt-right people” or even “white nationalists.” However, the pair have “opportunistically grabbed powerful issues that the alt-right and white nationalists are interested in.” Namely a reduction in immigration, especially of non-whites.

“What Trump has done, what he’s assembled — his America — is a civic nationalist coalition, really,” he said. “But it does have a white core that’s implicitly ethno-nationalist.” He went on to call the Republican Party an “implicit community,” as it’s long been a “fundamentally white organization” in contrast to the Democratic Party, which has been a haven for racial, religious, and sexual minorities.

Toward the end of his speech, Brimelow mentioned the recent controversy over vice president-elect Mike Pence having been booed while watching a performance of Hamilton. Brimelow called Pence a “complete inoffensive whimp,” and complained that anyone who would have done this to President Obama would have been “lynched” in response.

“And at the end of the thing, the cast got up and read him a statement, saying — denouncing him and denouncing Trump.” The statement read as follows:

Thank you for joining us at Hamilton-An American Musical.

We are the diverse America who are alarmed and anxious that your new administration will not protect us, our planet, our children, our parents, or defend us and uphold our inalienable rights.

We hope this show has inspired you to uphold our American values, and work on behalf of ALL of us.

Brimelow took umbrage with the idea of Pence being lectured by people claiming to represent “diverse America.” As Brimelow pointed out, “There is no quote-unquote ‘diverse America.’ There’s only white America. The people who’ve already voted for Trump. They are America. Everyone else is just along for the ride.”