When I heard there was going to be an animated Angry Birds movie — based on the app of the same name in which you hurl birds at their pig enemies by way of a large sling shot — I knew I would have no desire to see it. I saw it as just another in a long line of movies to cash in on video games, many of which have little or no plot. (Case in point, there’s a Tetris movie in the works.)

What makes the Angry Birds movie interesting is that, despite its 43% rating on review aggregator Rotten Tomatoes, it seems to have acquired the unlikely fandom of the white nationalist community due to what they see as its strong anti-immigrant theme.

The basic premise of the film, as far as I can tell, is that a land populated by multicolored birds is invaded by an army of green pigs. Led by Mudbeard, the pigs appear benign at first and gain the trust of all the birds, save one: Red, the hot-tempered protagonist.

Red’s distrust of the pigs — which stems from the fact that they destroyed his home on arrival — has branded him an outcast. Later, the pigs ravage the birds’ community and steal their eggs, vindicating Red in the eyes of his neighbors and prompting him to wage a war against their foes. So far, so good, right?

Well, YouTube reviewer LeoPirate (who is not a white nationalist) asserted that the film may actually be a metaphor for the current refugee crisis facing Europe, with the pigs as stand-ins for the migrants who, as the political right has been asserting, are villains in disguise.

LeoPirate took note of several coincidences in the film. The villain, for example, is a bearded animal often seen posing in front of explosives and just so happens to be a creature Muslims consider unclean. The colors of the three main heroes of the film are black, yellow, and red — the colors of the German flag. One character, a heroic bald eagle named Mighty, appears to be a plain reference to America.

A “Coexist” bumper sticker (the one usually found decorating so many liberals’ cars) can be seen during the climax, and one of the pig’s ships sports the name “Hamnesty International” — a clear parody of the human rights group Amnesty International.

Talkative YouTube philosopher Stefan Molyneux — who actually does share anti-refugee views and often dabbles in subjects such as race and IQ studies — made a similar case for this interpretation.

In a video entitled “The Truth About Angry Birds: The Movie,” Molyneux describes the birds’ environment as a “highly feminized, almost gynocentric” one in which “masculinity is a rather smelly and inconvenient intrusion into the Muzak-drenched mall of empty, rainbow materialism” — at least prior to the invasion of the pigs and the birds’ revolt.

Molyneux, like LeoPirate, noticed the connection between the pigs and migrants, stating, “I suppose one way to look at it is that it can be interesting and fun to have a few pigs around, but what happens when they’re able to outvote you?”

When Molyneux starts to talk about the pigs’ theft of the eggs, he gets right to the point:

For me, this is an analogy for the basic, disastrous demographic reality that, in a welfare state, endless waves of immigrants take precious resources from the native population and give them over to the immigrants. This transfer of resources inevitably lowers the birthrate of the domestic population, while massively increasing the birthrates of the immigrants. A literal transfer of eggs. Massive immigration into a country is not the same country plus immigrants, but rather the country plus immigrants minus millions of natives. Massive immigration is not an addition to a population, but rather a displacement of the population.

In a February 1 post from The Daily Stormer, Andrew Anglin asked whether or not the film was “about immigration.” “Everyone on the Nazi-web is talking about this new Angry Birds trailer showing parallels with the migrant crisis,” he wrote, pointing out that the birds lived in a “homogeneous bird society” before being invaded by “evil pigs” who “run amok.”

At Peter Brimelow’s anti-immigrant website VDARE, a column praises the film as “funny, entertaining, and best of all, right wing and hated by SJWs” and instructs readers to “take your kids to see it today!” And at Prison Planet — one of Alex Jones’ online hubs for conspiracy theorists — Chris Menahan called it a “red-pilled anti-immigrant propaganda film” and cited both the VDARE column and LeoPirate’s YouTube video as proof. 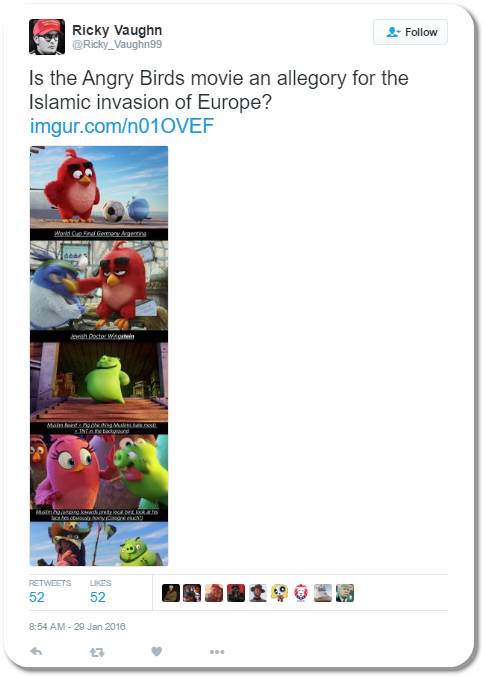 Not exactly George Lincoln Rockwell’s “Fable of the Ducks and the Hens” but I suppose it’s the best white nationalists can hope for nowadays.