White nationalists and other fringe racists have come out in droves to support Donald Trump, whose candidacy has been building steam since his victory in New Hampshire. Far-right figures like David Duke, Jared Taylor, Matthew Heimbach, Roosh Valizadeh, and Richard Spencer.

Over at Stormfront, the world’s largest online white nationalist community, users have mainly been supportive — although every now and then there’s still grumbling over his opinions on Israel and the Jews.

In one very popular thread, Stormfronters declared Donald Trump to be a harbinger of a new Fourth Reich. The thread, which spans some 62 pages (as of this writing), was started by user vikaryan who posted a picture of Trump and wrote:

He also explained that, should America “go full-on Reich mode,” then “literally nobody could stop us”:

Anyone who is in-tune with the average American knows that, if any nation will declare that it’s “Reich Time,” it’s America for a multitude of reasons.

>Americans view their nation similarly to the way that Germans used to view their nation. They saw Germany as “above everything in the world.” Hell, that proclamation is literally the title of the German national anthem: Deutschland über Alles.

>Americans tend to be xenophobic whether most want to openly admit it or not. The massive hordes of third world immigrants only increases this sentiment.

>The Left is increasingly losing control of the SJWs. This wouldn’t be a problem if people outside of SJWs actually liked SJW. As more millennials graduate college, more SJWs will enter the ranks of the Left. As they grow in numbers, more people will turn away from the Left and into the embrace of this “charismatic figure” that Chomsky talks about.

>If America decided to go full-on Reich mode domestically, literally nobody could stop us. The American military, when unleashed, is the most lethal killing machine in human history. Our military wasn’t cucked by a World War. You can be sure that this “charismatic figure” would use our military to its full potential if the American people were ever threatened.

Antonio Fini replied, calling it an “Excellent post” and adding that Donald Trump “is attacking the very underpinnings of White genocide which are third world invasion and political correctness.” T3, on the other hand, chastised vikaryan for his optimism, writing, “At least you could wait till you got rid of the Negro president before declaring the coming of a 4th reich [sic].”

The Eye of Horus was similarly hesitant:

Trump is not the Fuhrer. The System could stop the rise of nationalism if they promoted Trump, but they seem drunk with the false hope their mulatto messianic monkey has given them
When Trump withdraws, due no doubt to threats like Perot, Americans will at first be sad, and then angry when they see the bilious and unsympathetic traitors like Hillary and Boosh pushing the same crap and rubbing salt in the wound of Angry Americans.
Only when the System has no answers will the Man on the White Horse come to lead the Men of the West against the Orc Army of the Evil Hook-Nosed Goblin Kings.

A commenter going by the name laidbackguy71 was blunt, preferring to merely post the phrase, “Heil Trump!” Another commenter, The Q, urged his fellow forum members to be more cautious in their support of Trump, stating:

The funny thing is – is that the more we (in the WN community) heap praise on Trump, and proclaim him to be the start of the 4th Reich – the less likely that a 4th Reich will happen. I can just see liberal columnists writing hit pieces on Trump mentioning the enthusiasm his campaign is receiving on the white nationalist website Stormfront, with one poster saying that Trump is the opening act of the 4th Reich. The liberals are already saying Trump is a racist and a nazi. Hillary made a comparison between Trump and Hitler with her “boxcar” reference last week. Ironically it could help Trump’s campaign if he throws us (WNs) all under the bus. I’d still vote for Trump even if he said he doesn’t want my vote. I won’t take it as a personal slight of any kind. The key is for Trump to win, and he doesn’t need the endorsement of the WN community and he almost certainly doesn’t want it. So, I fully expect Trump to distance himself from the “neo-nazis” that love him, and I’m okay with that, because he has to do what he has to do to win. I only care about him winning and following through on his promises in regards to immigration. The only thing that matters is results. (Emphasis mine)

Uh oh, was I not supposed to write about this? Oh well.

Other commenters joined in seemingly for the sole purpose of posting ridiculous images and memes. Most of them simply glorified Trump:

Including images (favorably) comparing him to Hitler: 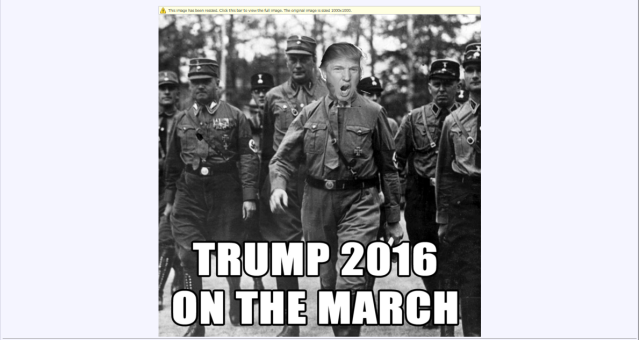 And, of course, the Pepe meme:

It being Stormfront, the thread was also replete with racist and anti-Semitic cartoons: 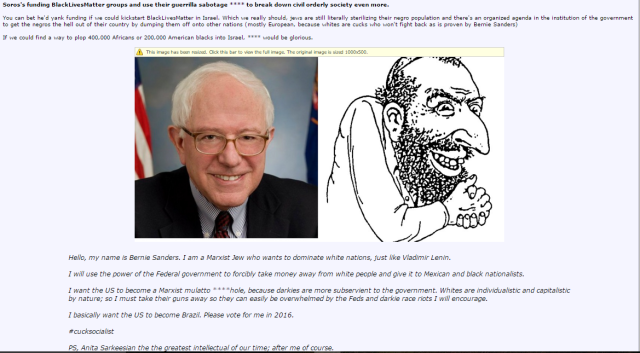 Some of which appropriated decades old white supremacist caricatures to attack Ted Cruz:

And even appropriated, without irony, an advertisement for the show The Man in the High Castle: