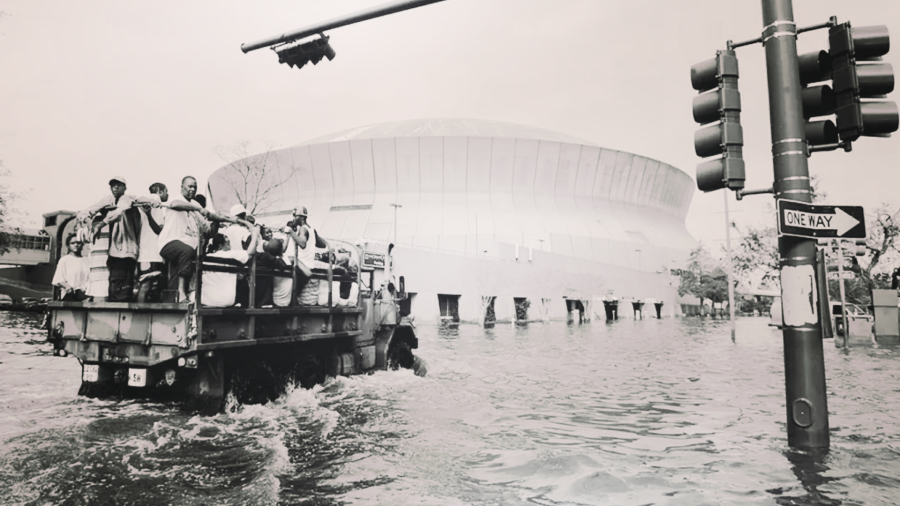 Worse yet, Kersey horrifyingly asserted that Hurricane Katrina was just God’s way of waking white people up to the supposed true nature of black people:

God tried.
Seriously.
In 2005, he tried to show the world the reality of blacks when Hurricane Katrina hit New Orleans and blacks in America regressed to the African in less than two days.
No one of consequence dared pay attention.
Now, black crime has overwhelmed New Orleans to the point that violent criminals have so backlogged the legal system that court-appointed public defenders are refusing to take on serious felony cases.
. . .
One more time: America is irredeemable.

Again, the only thing worse than the original post itself are the comments by Kersey’s readership:

“Well, i guess the Constitution says when niggotry becomes too expensive to manage all of the arrests we just have to let them free and that’s that.

But when the money and resources for feeding, housing, and health care for the negroes runs out we MUST borrow more to keep the system running.

Can somebody point out where the constitution says that, exactly?” – Emily Anderson

“Dindu” is a racial slur against African-Americans:

“God I love it, the dindu gets so carried away with their crimes that it consumes so many resources that their 6th amendment rights cannot be afforded to them. Absolute excellence. Yet not a peep from any activists, just another hat tip to realists.

One commenter throws out a lynching reference:

“Negroids are always ooking and eeking about the wrong place and wrong time victimizing them because there aren’t enough jobs. My proposal is for the city to just toss out all the backlogged cases and put the suspooks immediately to work testing the strength of rope.” – Tobias Benjamin Goode

“Nordic Caucasoid” here gets right to the point:

Remember the negro mayor at the time of Katrina said “we will make this a chocolate city” and they have alright! Just look at the crime stats.

NO NEGROES=NO PROBLEMS! And it’s really as simple as that.

On another note. To all of you lucky GREATWHITES out there in SBPDL land who grew up in the 1950’s I am so jealous of you. Or envious could be used also. That decade was the greatest decade for us Whites that America will ever see. Isn’t that sad just thinking America’s better years are behind her because of the LOWLY COMMON NEGRO.

And an anonymous commenter:

“Just make it legal for the lesser-evolved hominids to kill each other, offer bounty money. If a black kills a human, though, terminate with extreme prejudice. Blacks need special laws since YT’s laws and values are impossible for them to abide. It’s impossible for blacks to stop killing, it’s they way they settle disputes, just like in the old country. Freeing blacks merely gave them the freedom to be, well, Africans.

Descendants of Africans brought here 400 years ago act the same as Africans who arrived in Europe only last year. It’s a DNA thang.” – Anonymous

And this lovely comment from a very Christian woman named “SC Girl” (of course):

“I’m a pro-life Christian, however, considering the danger white America is in, if it were up to me, I’d have a Planned Parenthood in EVERY black neighborhood. I would inject every ghetto welfare queen with Norplant if possible. Something must be done to dwindle the population of the mouth breathers among us.

Also, and this is totally unrelated but I just heard a couple of my black neighbors walk by speaking in their mother tongue of ebonics and I just have to know, why the hell are 99% of black people incapable of speaking proper English? I mean, I could understand it if this was 250 years ago when the black slaves spoke in their Gullah language but good God, you’ve been here a long ass time, speak proper English! Does anyone have any idea why blacks can’t speak proper English despite being born in the same country as the rest of us?” – SC Girl

And this stupid nonsense:

The right to defend yourself has been twisted by commie pinko judges who wanted to destroy the White Legal system (part of the PLAN by those we may not talk about).

If you can’t afford an attorney or are too stupid to find a way, then it is not up to the State to pay money for you actions.

(I’m not a Lawyer, but I’ve lied enough times to women I dated that I qualify.)” – CENTURION