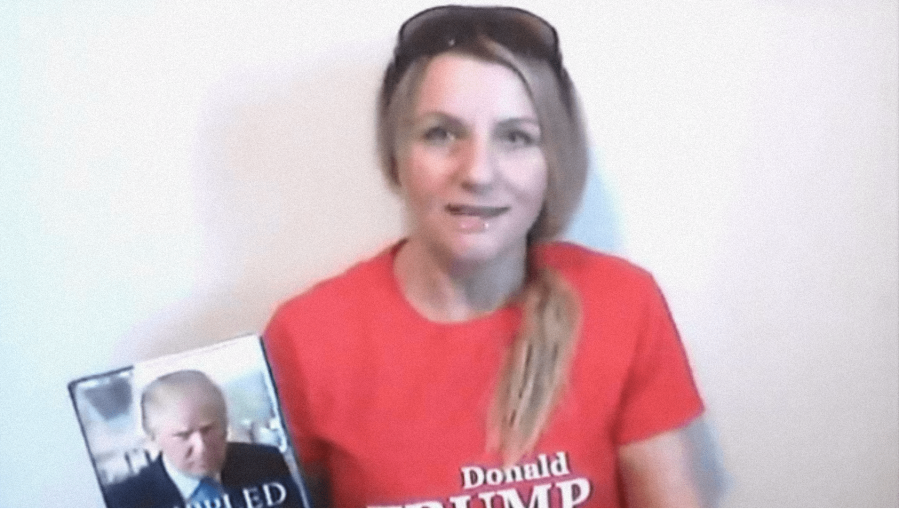 It’s a well known fact that many prominent white nationalists and neo-Nazis have voiced their support for Donald Trump in the 2016 presidential election. Trump was even the beneficiary of a robocall by Jared Taylor and others. He can now count on the support of Janet Bloomfield, a Canadian blogger and men’s rights activist.

In the provocatively titled video “A vote for Trump is a vote for men,” Bloomfield explains her unyielding support for Trump — and why men ought to be voting for him. Bloomfield states that she has long been a fan of Trump’s since before he announced his candidacy, as she’s “always been very attracted to arrogant, brash, irreverent, completely unapologetic guys.”

Yet that’s far from the only reason for her excitement over the Trump campaign. Pulling out a copy of Crippled America Bloomfield voiced her support for Trump’s authoritarian immigration policies, including his proposed ban on Muslim immigrants — a move decried by his fellow Republicans as antithetical to conservative ideology.

“Until we can tell the difference between Islamic maniacs and the Muslims fleeing those maniacs, until we know which ones are which, we need to stop all immigration of Muslims into the U.S.,” she said.

She also applauds his foreign policy proposals, including the bombing of Middle Eastern oil fields in order to “cut off the money supply to the Islamic State.” She also criticized those who worry about the environmental crisis that would follow such a bombing, noting that “Hiroshima and Nagasaki weren’t exactly environmentally friendly.”

In fact, the use of atomic weapons on Japanese cities “ended a conflict that was costing millions of people their lives, and out of the ashes rose the modern economic engine of Japan, under the authority of the United States.” That, she said, is “exactly what a good war looks like.”

Bloomfield then urged men to vote based on gender. Although the title may suggest that she is telling men to vote for Trump because Trump is a man, that is actually not the case. Instead, Bloomfield says that the reason men should vote for Trump is because he is the only presidential candidate who won’t demand “boots on the ground” in the Middle East. Under any other administration she believes the male-only draft will be resurrected — a very unlikely scenario.

No matter since she asserts that “you are going to have every single military-age woman in North America subject to the draft pregnant” in order to avoid serving. Yes, according to Janet Bloomfield if the draft were to be brought back and applied to both men and women, “90% of every 18-year-old female in the U.S., 90% of them will be pregnant almost immediately.”