Controversy erupted recently when rapper B.o.B. (known for his 2010 single “Airplanes”) admitted to being a Flat Earther, repeatedly asking his Twitter followers for proof that the Earth has a curve. Here’s a sampling of his, ahem, wisdom: 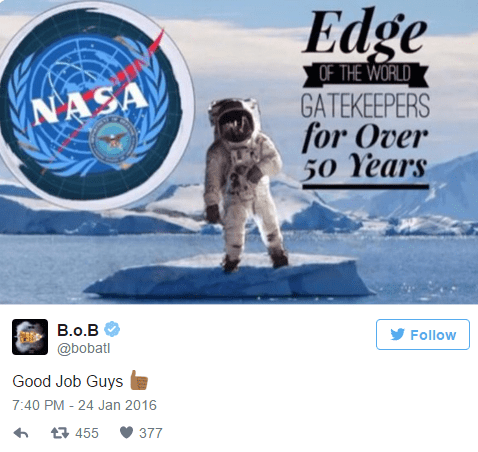 Physicist Neil deGrasse Tyson responded, tearing apart B.o.B.’s “regressive” beliefs. This, in turn, inspired B.o.B. to release a diss track aimed at Tyson. The song, titled (what else?) “Flatline”, samples some out-of-context portions of a Neil deGrasse Tyson lecture and, to the surprise of no one, reveals that B.o.B. believes in a multitude of bizarre conspiracy theories.

Here are a sampling of the song’s lyrics:

Yo, you ain’t seen my best
Checkmate, ain’t a game of chess
Globalists see me as a threat
Free thinking, got the world at my neck
Hah, am I paranoid? Picture Malcolm X
In a room full of pigs, trying not to bust a sweat
Aye, Neil Tyson need to loosen up his vest
They’ll probably write that man one hell of a check

Okay so, shadowy cabal of “globalists” and Neil deGrasse Tyson as a paid shill for…Round Earthers?

Now the mirror lizard’s breath got the clones scared cuz
Woo, use your, use your common sense
Why is NASA department of defense?
They divided up the seas into thirty-three degrees
Feeding kids masonry, bruh, be careful what you read

Now we have a possible reference to reptilians and clones (he believes there are secret celebrity cloning centers). Plus the obligatory jab at Freemasons.

Indoctrinated in a cult called science
And graduated to a club full of liars
Heliocentrism, you were the sixth victim

But before you try to curve it, do your research on David Irving
Stalin was way worse than Hitler
That’s why the POTUS gotta wear a Kipper*

David Irving is a notorious Holocaust denier who, in 2006, ended up doing time in an Austrian prison for publicly casting doubt on the existence of gas chambers at Auschwitz. He also unsuccessfully sued Deborah Lipstadt (an actual scholar) for libel in 2000 after she labelled him a denier and Nazi sympathizer. As he put it in 1988, “I don’t think there was any overall Reich policy to kill the Jews. If there was, they would have been killed and there would not be now so many millions of survivors. And believe me, I am glad for every survivor that there was.”

*I haven’t listened to the song myself, and I don’t know if it’s a transcribing error, but a kipper is a type of fish. Perhaps B.o.B. meant a Kippah, which is actually a cap that Jews wear.