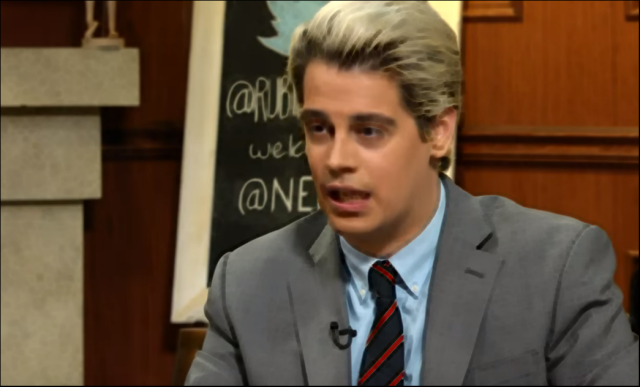 In what was evidently meant to be a “humorous” opinion piece, Breitbart London‘s Milo Yiannopolous — a trans-hating #Gamergate supporter — penned an open letter to straight people, giving them permission to use anti-gay slurs like “faggot.” No, really:

Because I so rarely bring it up, it may surprise even regular readers to discover that I am a homosexual. You’ll be shocked! But it’s true. I am a poof. A Mary. ‎A screaming queen.

Anyway, because I am a queer, and given my natural instinct for mischief and visceral loathing for political correctness, I am perhaps the only person in public life who can address a horrible linguistic injustice visited upon us all by the finger-wagging progressive Left, to which my attention has been drawn by my colleague, John Nolte.

I speak, of course, of the theft of all the best cuss words in popular culture, and in particular “queer,” “faggot” and “gay,” which have been stolen from common usage by grievance-mongers and robbed of their most obvious and clearly superior meanings.

It should be abundantly clear that one member of a minority group has no authority to grant members of the majority a right to use hateful slurs. As if a self-hating gay man were representative of the LGBT community in the first place — but I digress.

Milo’s favorite slur, according to the article, is “faggot,” which he especially enjoys using on other gay men. “Nothing annoys them quite like dramatic rhetorical escalation, because they are used to bullying others into silence with meaningless words like ‘homophobic.'” Homophobia, he asserts, is “meaningless”:

“Homophobic” is a meaningless word not only because everyone loves and sucks up to and mollycoddles gays these days but because a phobia is an irrational fear, whereas my local basketball team is entirely right to be wary when they see me emptying a small vial of clear liquid into their half-time orange juice.

I like faggot because my fellow butt pirates have insisted on “reclaiming” the word queer to make it inoffensive–the slimy, preening bastards. I also like faggot because it’s the go-to slur used by image boards, where identity politics is considered quite literally worse than AIDS. Which of course it is: what’s not to love about all that attention and weight loss?

Faggot is too great a word to be reserved only for gays. So go ahead, I implore you. You can tell people you got a pass from your new leather-clad, popper-sniffing best friend.

Folks like Milo are beneficial to homophobic conservatives on Breitbart and elsewhere. He’s a gay man who actively attacks other members of the LGBT community in the name of “political incorrectness,” opposes gay rights, wishes he were straight, and acts like the religious right’s image of a stereotypical gay man. He even ends with a lovely gay-bashing joke: “Frankly, listening to their dreary pronouncements on ‘cis privilege’ makes me want to put on a wifebeater, rent a pick-up truck and beat the living daylights out of the village twink.”

As one Breitbart commenter wrote, “Thanks, but we don’t need your permission homo.” (He received nearly fifty upvotes for that statement.) Another wrote, “I used to think I was homophobic. Then I discovered Milo. Turns out I’m only leftophobic. I don’t hate homosexuals because they’re homosexual. I hate them when they’re bullying, totalitarian, censoring progressives who want my life to be miserable because I’m not one of them.”