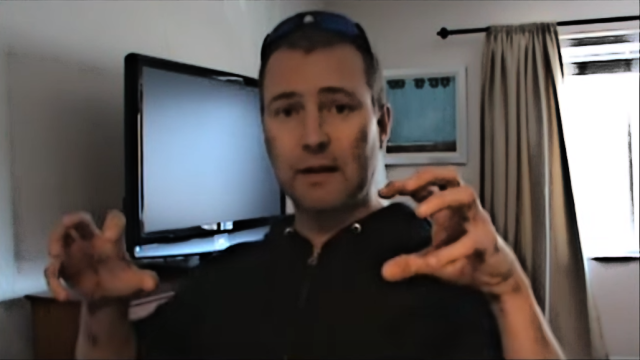 You might remember Aaron Clarey as the laughably insecure videoblogger who proposed a boycott of the film Mad Max: Fury Road on the grounds that it promoted feminism. In a post for his blog Captain Capitalism, Clarey bemoaned women’s suffrage, accusing women of voting to “ruin their lives, home countries, and economies.”

In the Dec. 7th post, titled “Western Civilization is in the Hands of Women…Heaven Help Us”, Clarey claimed that rape and sexual assault in European countries is being caused by women who vote in favor of left-wing policies. He chalks this supposed phenomena up to bad boys, cuckolds, and women who secretly want to be raped:

Now there are many possible explanations for this self-hating, self-destructive behavior. Perhaps these women deep down inside hate Western Civilization so much they’d rather be raped, and maybe even view that as fighting “evil white male, Eurocentric patriarchy.” Perhaps these people are cowards, see the writing on the wall, know Western Civilization won’t make it, and kowtow like cuckolds to what they perceive to be their future overlords. Maybe it’s crusaderism combined with the allure of bad boys, prompting young girls to join ISIS even if it means their inevitable death. Or perhaps, deep down inside it’s nothing more than good ole fashioned “rape fantasies” influencing the way they vote.

Whatever the reason women vote “to destroy themselves and Western Civilization”, Clarey said, the end result is the same. “The rest of us must accept and adapt to this fact. And call it ‘democracy,’ call it ‘women’s suffrage,’ call it ’empowerment,’ it’s nothing more than a euphemism for ‘betrayal.'”

Clarey believes that Western civilization, if not already destroyed, is dangling on the precipice. He ridiculously places the blame squarely at the feet of womankind:

When it comes to socialism I’ve covered this before, but women, in general vote for more state control. They vote for socialism. And while many of them do so out of the naivety of “it’s to help the poor/children/old/etc.,” it is is a slap in the face to the immeasurable and ultimate price millions of people paid to bring Western Civilization about. Quite simply, the history of the world has been a horrible and costly struggle to free people from the tyranny of government. Going back to the warlord tribal chieftains, to the theocracies falsely claiming to represent “god,” to the fiefdoms where the “king” was supported by a slave class of serfs, to wars waged against slavery and nazism [sic], hundreds of millions of lives were wasted, destroyed, committed, and dedicated to bringing about a limited republic permitting the people to govern themselves. And women (along with some cowardly little men), in a short 60 years of spoiled-brat-laden feminism have been able to undo what took about 4,000 years to create. It is arguably the single largest setback to human advancement since the bubonic plague.

Yes, the granting of voting rights to women is the “largest setback to human advancement” since the Black Death. No hyperbole or misogyny here.

He then accused women of taking away “men’s reason for living,” and making false rape accusations against Western (i.e., White) men “because ‘patriarchy'”:

are voting to bring in other cultures that want to kill, parasite off of, or just plain destroy Western Civilizatoin

won’t report getting raped by the enemy because “diversity”

WILL make false rape accusations against Western men because “patriarchy”

precisely how many knives do you plan to impale into the backs of Western men before they give up?

He also gives advice to his readers on why they should just stop fighting already:

If only we could get these bigoted cranks to stop whining too.