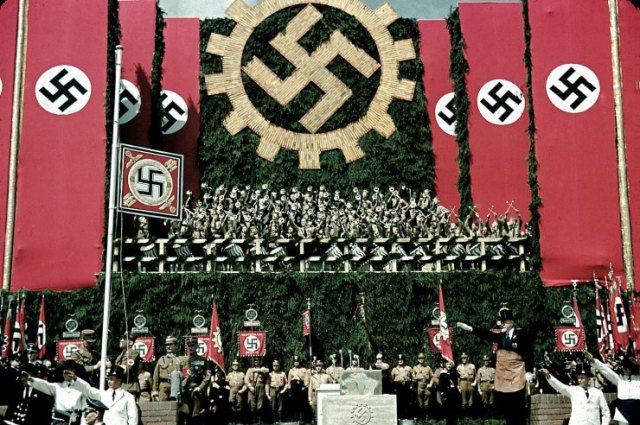 On the September 28 broadcast of Radio Stormer, Matt Forney was interviewed by white supremacist thug Matthew Heimbach, where the pair discussed the Manosphere, white nationalism, and — as usual — the perils of feminism and anti-racism.

Heimbach, the founder of Towson University’s White Student Union and host of the Trad Youth Hour, began by asking Forney what he thought of the latest American Renaissance conference, the guest list of which is usually a who’s who of white supremacy. Unsurprisingly, Forney spoke glowingly of the folks at AmRen and recommended that anyone “on the fence” about white nationalism attend one of their conferences.

Heimbach noted that far-right “identitarian” conferences like AmRen have been attracting younger generations of white racists, which “contradicts the far left’s position” that beliefs in gender roles and preserving one’s racial or ethnic identity is “somehow dying out.”

These young, white attendees, as he put it, are “normal” people. Forney agreed, and pointed out that white nationalists and denizens of the manosphere come from “pretty much the same demographic.”

Heimbach: Well, and, you know, it’s one of those sort of things that I’ve seen. You know, I’ve been going to identitarian conferences now for, uh, I mean really, I guess, half a decade — and it’s amazing how time flies. And I’ve just seen, myself, over the past several years how things are changing. That the [attendees of white supremacist] conferences are getting younger which, you know, really contradicts the far left’s position that the idea of believing in traditional gender roles, believing in traditional western civilization, and also ethnic identity is somehow dying out.

But it seems every time I go there’s more young people, and the people I meet are increasingly normal. You know? I don’t know how else to say it, but you know, when you sit down, you have a couple beers and a cigar with a lot of these guys and gals that come to these conferences, it seems to me that they’re really just normal people who are fed up with the system. I mean, is that something that you would, uh…how would you judge the, uh, social, uh, skills of, uh, the attendees? Not all of them, but, you know, the vast majority?

Forney: They just seem like normal…they just seem like normal people to me. Normal, cool, average guys and girls who, you know, just happen to have, uh, beliefs that are a bit out of the mainstream. You know, it’s like, I wasn’t entirely sure what to expect, but it’s like basically, it’s like…it’s really not that much different from…I’ve not been involved in identitarian politics, but I…for the past few years I’ve been sort of organizing meet-ups with guys from the manosphere as it were.

And it’s pretty much the same demographic. You know? Guys who are just, you know, like to, you know, have a few beers, enjoy life, and are pretty much normal people with day jobs, you know? Just, just, there’s nothing distinguishing the, uh, the AmRen people — the people who are interested (inaudible) identitarian politics — from the general population aside from the fact that, you know, they’re more intelligent and, obviously, they’re into the politics. So, I’d say they’re just normal people.

Heimbach: And, you know, I really see that’s kind of the future, you know, whether you identify with, uh, you know, identitarian politics, white nationalism, the manosphere — I mean, really anything where you’re, you’re taking a red pill. Uh, you know, we need to be able to attract normal people and that’s how you create a mass movement. If you don’t get, uh, normal folks, then you’re not, you’re not gonna be able to break out of the echo chamber that you really see with the, you know, purely online communities.

Forney cited the use of the racist cuckservative hashtag, and support for Donald Trump, as evidence that white nationalist ideas are “penetrat[ing] into the mainstream.” Heimbach said that Donald Trump’s appeal lies in “the fact that he acts very masculine” and says what he wants without apology.

Forney: We’re seeing more and more, uh, uh, bloggers…and we’re seeing ideas penetrate into the mainstream so, uh, I’m…what, what I see now is I see people who are unafraid to, uh, say what they believe in. We’re no longer…we’re still a minority, you know, uh…we’re still a small fish in a big pond. But at the same time we’re seeing people who are more courageous about standing up and not, sort of, you know, hedging their…um…and just, um, not being afraid to talk…their opinions.

We’ve seen this with the, uh, rise of the cuckservative hashtag, the epithet, the, uh, the support for, uh, Trump in the, uh, presidential election, you know? We’re seeing a real sea change in how people, uh, approach these things. And I’m really glad to see it, ’cause I guess, to a certain extent, this is something I’ve been fighting for for a good portion of my adult life and we’re starting to see fruit. It’s not exactly the way I envisioned it happening but I’m glad it’s happening.

Heimbach: Yeah it’s kind of a weird reality when you have guys like Donald Trump who, you know, he really…I think most of his appeal comes from the fact he acts very masculine. You know, he goes forward and he says, uh, what he thinks, and he doesn’t apologize to anyone.

The pair then discussed the “far left” and what they perceive to be its insatiable desire for control. As Heimbach asked, incredulously, “[W]hat more do you guys want?”

Believing there are no battles left for progressives to fight — now that marriage equality is the law of the land in the U.S. and abortion is still technically legal — Heimbach and Forney theorized that leftists will now turn on one another, or take up even more “disgusting” causes such as “the normalization of pedophilia.”

Heimbach: Well that’s kind of like, what more do you guys want? You know, like, you, you got gay marriage, you know? You got abortion on demand. You’ve got the, uh — like you said — the sex consent laws where any man after uh, you know…if the woman had one, uh, sip of wine and the man did then men are going to jail for rape and are sex offenders for the rest of their lives.

You know, like, what, uh…you’ve got immigration and, uh, basically de facto amnesty for the anti-whites. Um, what, what more do you people want? Like, we’ve, you know…the right — or at least the mainstream right — has capitulated so hard, has just bent over backwards and done back flips to appease the far left over the past two generations. It’s kind of like what, what more are you guys fighting for, you know? At what point are you no longer fighting the man, you know? When are you not against the system? ‘Cause I’m pretty sure we could all accept that, you know, the, the stated main, you know, goals of, like, anti-racist, anti-fascist groups that say they’re fighting organized white supremacy and the patriarchy.

Um, you know, maybe I’m just blinded or something but I see no examples of an organized, patriarchal, white supremacist America. I see that the radical feminists, uh, the radical anti-white agenda, uh, and really radicals of — like you said — of every stripe — the fringes — that they’ve, they’ve won everything they’d asked for. You know, it’s kind of like, what now? And they just don’t know where to, where to go from here.

Forney: Yeah, I mean, um, I was having this argument with the Men Going Their Own Way, the MGTOWs, the Virgin-TOWs if you wanna call it, who are living in…who are living in fear of some great, Christian patriarchy coming to pull them out of their basements and make them man-up and marry those sluts. It doesn’t exist! Maybe ten years ago when Bush was president, like, that would have been plausible. But so far as I can see the left has won victory after victory — we’ve got gay marriage, like you said, we’ve got transsexual acceptance. We’ve actually got, we’ve actually got the left now arguing for the normalization of pedophilia. There was that article on Salon a couple days ago. That was disgusting.

Um…we already…we already see what’s going on. Basically, there’s nothing left for them to win. The, the so-called enemy, the, the evil rightists have been on the retreat for, for about as long as we’ve been alive. Um…so there’s nothing left for them to do but, say, turn their guns on each other until the one last leftist is standing in a mountain of, of uh, corpses, and then puts a bullet in his own head just ’cause he’s so sad.

Heimbach then weighed in on “leftist ideology” which, he said, is obsessed with seeking pleasure by “trying to gobble up” sources of pleasure, whether that pleasure comes from “cocks or drugs.”

The left, he said, is possessed by a cowardly “mob mentality” and individual leftists are unable or unwilling to make the “individual sacrifices” necessary to “advance their cause.” The right, on the other hand, is filled with people who are “living for something greater” than themselves and are “more willing to make sacrifices” in defense of their ideological principles.

Heimbach: There’s something about the leftist ideology where, you know, on, on the right, for instance — you know, I, of course, take things from a Christian perspective, um, you know, so I’ve got beliefs about the afterlife, and sacrifice, laying down your life for a brother is the truest form of love, you know, things like that. But even those, you know, whether they’re folk religionists or even, you know, not religious, on the right we see the idea that you’re living for something greater than yourself, you know? Whether you have a religious bone in your body, and you just want your children and your grandchildren to have a better life, you are more willing to make sacrifices, whether that’s monetarily, whether it’s spending your time doing things, or whether it’s actually fighting to defend your principles against an aggressor.

The left isn’t willing to make, it seems like, very many sacrifices at all, you know? Where, you know, the most act…you know, active far left organizations are, like, in your city. Like in Chicago where, you know, they’ll go up against nationalists when they know nationalists, uh, can’t carry guns because of the local laws, and they can kind of hide in these communities and, uh, you know, attack, you know, and outnumber people five to one. But they’re not courageous. They’ll never face nationalists or right-wingers one on one. They have to be in a mob. It’s the mob mentality where they psych themselves up and just go full retard, but they, they don’t seem to be willing to make the individual sacrifice necessary to advance their cause.