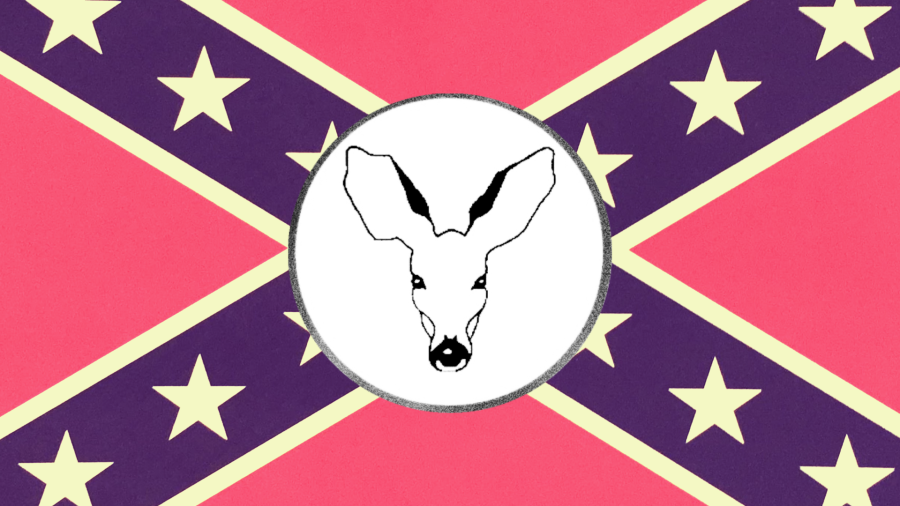 VDARE.com — a white nationalist website founded by Peter Brimelow, and which features poisonous screeds by Ann Coulter and Pat Buchanan — is currently begging for donations.

As VDARE staff wrote, readers can donate $50, $75, or $125 in order to take a stand “against Cultural Marxism” and “celebrate America.” In return, donors receive a so-called “Patriot Pack” which consists of Confederate battle flag decals and a copy of the late Samuel P. Huntington’s final book, 2004’s Who Are We?: The Challenges to America’s National Identity:

Yes, in exchange for your hard-earned cash, you can “celebrate” the United States with a decal of the Confederate flag — a flag that represents a group of Southern states that rebelled against the United States as a whole over the right to own slaves. The side that lost, mind you, and which stood for white supremacy and treason. Right. Perhaps “Traitor Pack” or “Quisling Pack” had too negative a ring to it.

The inclusion of Huntington’s book is likewise rich. Huntington, a political scientist and Harvard University professor, dedicated much of his writing to the concept of a “clash of civilizations.” As Edward Said put it in his 2001 essay “The Clash of Ignorance”, “The challenge for Western policy-makers, says Huntington, is to make sure that the West gets stronger and fends off all the others, Islam in particular.”

Most troubling is how Huntington’s ideas were used by Islamophobes such as former Italian Prime Minister Silvio Berlusconi to “rant on about the West’s superiority, how ‘we’ have Mozart and Michelangelo and they don’t.”

If Huntington’s racism was thinly veiled in The Clash of Civilizations, it was far more overt in his article for Foreign Policy entitled “The Hispanic Challenge”, where Huntington issued a dire warning about how — as FP staff put it — “The persistent inflow of Hispanic immigrants threatens to divide the United States into two peoples, two cultures, and two languages.”

Huntington wrote that America was founded by “17th- and 18th-century settlers who were overwhelmingly white, British, and Protestant.” It was their “values, institutions, and culture provided the foundation for and shaped the development of the United States in the following centuries,” and they were the ones who “defined America in terms of race, ethnicity, culture, and religion.”

Of our nation’s creed, set forth by Thomas Jefferson in the Declaration of Independence, he wrote:

Most Americans see the creed as the crucial element of their national identity. The creed, however, was the product of the distinct Anglo-Protestant culture of the founding settlers. Key elements of that culture include the English language; Christianity; religious commitment; English concepts of the rule of law, including the responsibility of rulers and the rights of individuals; and dissenting Protestant values of individualism, the work ethic, and the belief that humans have the ability and the duty to try to create a heaven on earth, a “city on a hill.” Historically, millions of immigrants were attracted to the United States because of this culture and the economic opportunities and political liberties it made possible.

However, by the end of the 20th century “the United States’ Anglo-Protestant culture and the creed that it produced came under assault by the popularity in intellectual and political circles of the doctrines of multiculturalism and diversity.”

The “the single most immediate and most serious challenge to America’s traditional identity”, he said, stems from the “immense and continuing immigration from Latin America, especially from Mexico, and the fertility rates of these immigrants compared to black and white American natives.”

He dedicates paragraph after paragraph warning white Americans of the dire consequences of allowing into our country members of a racial and ethnic group whom, in his mind, are unable or unwilling to assimilate into the dominant culture — especially the dreaded thought of having to press two for Español. How awful.

Huntington concluded by writing, “There is no Americano dream. There is only the American dream created by an Anglo-Protestant society. Mexican Americans will share in that dream and in that society only if they dream in English.”

This strain of Nativism is as much at odds with our concept of a “melting pot” as, well, waving the Confederate flag at a Fourth of July celebration.