When we last took a look at The Sarkeesian Effect, it had just finished premiering at Gamergate in Atlanta before an audience of nine people.

One website, purporting to be the official website for the movie, just listed descriptions of a dummy text called Lorem Ipsum. Sarkeesian Effect co-creator Jordan Owen claims that it’s a fake, designed by some sort of bot, while he retains control of the real official website — just how a bot could make a marginally better website than Owen himself remains a mystery.

Meanwhile, Owen’s former partner, Davis Aurini, took to Twitter, gloating over the film’s abysmal opening and blasting Owen for having botched the project:

Before getting into a spat with fellow #Gamergate supporter Sargon of Akkad: 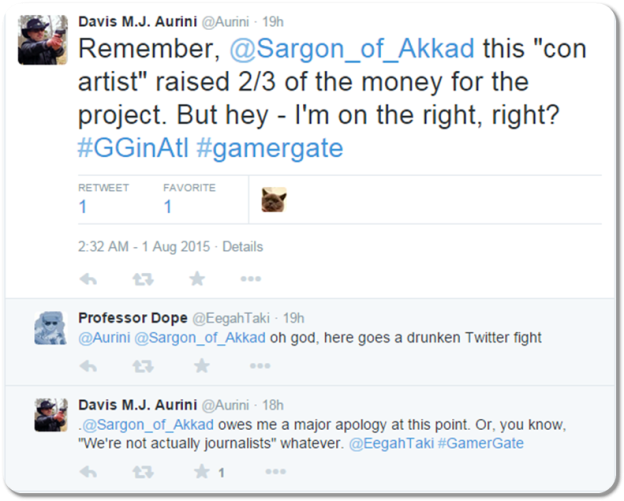 In turn, Thunderf00t — a longtime critic of feminism and Anita Sarkeesian who was actually interviewed for the movie — also chimed in, taking Aurini to task for his amateurish filmmaking abilities and penchant for blaming others for his own mistakes:

Over at /r/KotakuInAction, a major online hub for #Gamergaters, folks were initially silent until seven hours ago when a thread called “[Drama] The Sarkeesian Effect premier draws nine people” cropped up. As expected, there was plenty of disappointment going around on the thread. “I wish the idea had been done by more competent people,” wrote “BobMugabe35”, “Jordan I think had decent intentions but is a complete spaghetti spiller, and he picked the last motherfucker on earth I’d trust to have a well done doc done by.”

“The idea behind The Sarkeesian Effect is good, and the execution will probably be sufficient. However, these guys failed on all accounts when it comes to production,” wrote another redditor. “Too much drama, too much in-fighting, too little marketing and apparently they forgot to broadcast the fact that it WAS BEING RELEASED. Still, even with all of that, they’re free to use the #Gamergate tag… why? Because it’s a hashtag used to communicate. And because #Gamergate is about Ethics, and them trying to showcase who Anita is works with that goal. Because the press casually forgot to Ethics when sucking the proverbial FemFreq Cock.”

When another redditor mocked the people who donated money in order to fund the film, “Error774” remained defiant, writing, “No regrets man, no regrets. I still think Jordan Owen is a stand up guy, but i’m 100% convinced that Aurini is a con-artist.” So, he sees how the movie turned out, and fully acknowledges Aurini as a fraudster, but he has no regrets whatsoever? Not even one?

At least “ThePseudomancer” tried to be realistic: “Lets be honest. This was one of the more embarrassing things GamerGate has ever been linked to. I’m just glad only 9 people showed up. It shows me that not many of us were really interested in this shit-show.” “ShadowShadowed” was even more blunt, declaring Owen and Aurini to be “fucking idiots.” That is, by far, the most accurate thing I’ve ever heard from a #Gamergater.