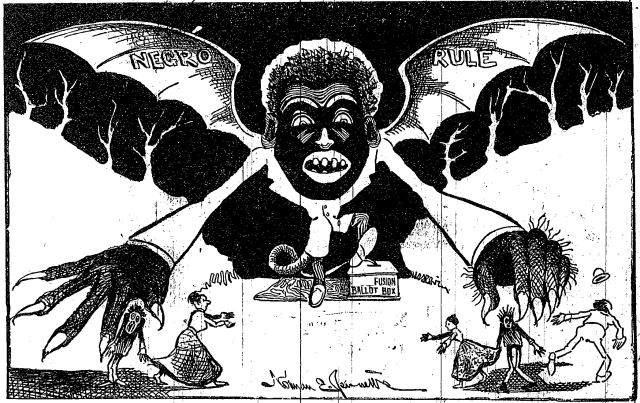 Matthew Heimbach, the founder of Towson University’s White Student Union and member of the white supremacist Traditionalist Youth Network, has a simple message for us: “I told you so.”

In an open letter he penned to “White Christian America”, Heimbach wrote that traditional America has been all but destroyed now that marriage equality has been legalized in all fifty states and the Confederate flag has finally been recognized as the American swastika — and treated as such.

Just yesterday South Carolina voted to bring the Southern battle flag down from the Statehouse grounds, and before that Alabama Gov. Robert Bentley ordered that all four — yes, four — Rebel flags be lowered from the state capital. This, Heimbach said, demonstrates that there is a “ramped up assault on all forms of Identity, heritage and Christian Tradition” in America.

Heimbach denounced modern Western society as a “fever dream of nihilism in which any form of organic society or Traditional religious beliefs are attacked as being fringe or fundamentalist, while perversions and an endless parade of degeneracy, abortion, drug abuse, and self-worship are celebrated as precious ‘choices.'”

Citing the case of a Florida couple who were charged with ten misdemeanors for failing to educate their children as an example of an apocryphal War on Christianity, he wrote anyone who believes their children should be home schooled instead of “being taught about sodomy and the homosexual movement” has been made an “enemy of the State.”

He then accused the “radical Left and their conservative shoe-shine boys in the Republican Party” of exploiting the massacre in Charleston in order to “launch a full court press against not just the symbols of White–specifically Southern–Identity.” Such symbols include the Confederate battle flag, which, he says, “is a symbol of hundreds of thousands of men who gave life and limb in the defense of their society, their families, and their Homeland.” He neglected to include the phrase “in defense of chattel slavery”, however.

Heimbach also warned readers that “the Left” — specifically a “Jewish-led banking and media elite” — is “actively hunting down any dissenting voices to their degenerate and satanic agenda” and will do so by any means necessary, including “shaming in the media, legal harassment, and ‘direct action’ personal harassment.”

The American Empire is built upon the false notion of a proposition nation, radical individualism, and a worship of money above all else. Modern Western society is a fever dream of nihilism in which any form of organic society or Traditional religious beliefs are attacked as being fringe or fundamentalist, while perversions and an endless parade of degeneracy, abortion, drug abuse, and self-worship are celebrated as precious “choices.”

Globalist elites will not make peace with those who simply wish to wish on the outskirts of American society and cling to our families, Bibles and guns. There is no room in America for us to “opt out” of the American society. The enemy smells blood in the water and is coming for everything that we hold dear. No matter what the Republicans or other reactionaries tell us, the Thought Police are headed to your door if you decide to continue living as a slave in this corrupt anti-Christ regime.

In modern America, you are not allowed to hold a Christian worldview and quietly bunker down to raise your children or run a small business. The Left is actively hunting down any dissenting voices to their degenerate and satanic agenda. They will use shaming in the media, legal harassment, and “direct action” personal harassment to destroy your ability to provide for your family, lawsuits to cripple you and even get you sent to prison or soon, and law enforcement to control and break all resistance. The enemy has launched a Total War against Traditionalists of every type in America, and I hate to say it… but “I told you so.”

One such example of the globalists attempting to destroy Faith, family and folk is the current policy of following the Orwellian model of making our heroes and ancestors “unpersons.” In George Orwell’s novel 1984 dissidents were not just killed or made to disappear, any record of their very existance was wiped out of public and private record. This is the battle being waged against Confederate symbols, including veterans cemeteries and war monuments. It is not enough to demonize our culture in yearly propaganda pieces in the media, or teach false history to our children in government schools, the enemy wants total victory against Traditionalists by rewriting the past so that they can fully control the future.

The Left is attempting to make our symbols, holidays and heroes disappear because these icons of resistance to tyranny and a link to the past could inspire a revolutionary spirit among our people. To know that breaking free of the chains of the Empire is an option is something that the System cannot allow our people to know.

The tragedy in Charleston is being used not as an opportunity to find ways to solve racial tension and problems in America, but instead it is being used as an opportunity for the radical Left and their conservative shoe-shine boys in the Republican Party to launch a full court press against not just the symbols of White–specifically Southern–Identity.

The Confederate Battle Flag is a symbol of hundreds of thousands of men who gave life and limb in the defense of their society, their families, and their Homeland. The flag is a symbol of men being willing to put it all on the line and suffer unimaginable hardship on the field of battle and in horrific prison camps for their beliefs and Traditions. The Confederate battle flag also represents the millions of Southern women and children who suffered starvation and deprivation to support the war effort to make the Southland a free nation.

Taking down Confederate flags from veterans’ memorials is especially reprehensible because these flags are not political statements, they are posted at memorials specifically dedicated to the men who fought and died underneath that flag in service to the Confederacy. If there is any place the flag of an army should fly on our soil, it is at the graves and monuments of the soldiers who were willing to give their lives underneath that flag. The Confederate Battle Flag is specifically a soldier’s flag, not the flag of the Confederate government, a flag for the armed forces of the CSA. While I wholeheartedly support the Confederate ideals, even those who are opposed to the Confederacy should have some semblance of respect for these soldiers.

I proudly fly my Confederate flag to honor my ancestors, right next to my Southern nationalist flag, and this is why the globalists must destroy any display of the flag even in graveyards or at monuments, any living pride in our Confederate ancestors could be enough to spark people to realize that the values of localism and secession could be the fix to our current political and social situation. Only through secession can we hope to keep the memory of our ancestors alive and bring to fruition the dream they died for.

America has become the new Babylon. The Jewish-led banking and media elite set the tune, but traitors among every ethnic group, especially Whites, are more than happy to betray their God, their Identity, and their extended family for the sake of praise, profit, and power. The government is actively persecuting those who think they can bunker down and hide from the System.

Soon our priests and pastors will be taken to jail for refusing homosexual “marriage” ceremonies in the House of the Lord, our churches will be bankrupted through endless lawsuits and cries of discrimination, our children will be carted off to government reeducation centers in the name of promoting “equality” and “social justice.” There is nowhere left to hide from the Eye of  America.

Through a centralized police State infrastructure we already know that our phone calls, emails, web searches, and even the books we check out at the local library are monitored by the American regime. The noose around the neck of White Christians who only wish to be left alone will keep tightening until people realize that we cannot coexist as citizens of a regime that hates our history, our ancestors, our people, and our Traditions.

The only path forward is secession. We must become free from the Satanic American regime that revels in its sins. America has enshrined the murder of over fifty million babies as “freedom”, the Supreme Court has called degeneracy and sin a “civil right” while they stand by and let God’s definition of marriage be mocked. The judgment coming to America will be righteous and it will be severe because as Scripture tells us in Galatians 6:7 “Be not deceived; God is not mocked: for whatsoever a man soweth, that shall he also reap.” We must stand up for the sanctity of life, of Biblical values, and the right of every people to have their own Traditions and Homelands, free from globalist imperialism and moral degeneracy.