It seems as though Johnson Tweeted what appears to be a thinly-veiled death threat against DeRay McKesson, stating that he was accepting donations for “taking out” the young activist. Johnson claims to have been “speaking metaphorically” and went on to, of course, accuse Twitter of censorship.

Johnson is also a suspect in a postering campaign against rape survivor Emma Sukowicz. Upon her graduation from Columbia University, Sulkowicz and many other New York City residents discovered obnoxious posters smearing her and author/actress Lena Dunham as “liars.”

The campaign was linked to an online Twitter account called “Fake Rape,” which used Sulkowicz’s image as its avatar and accused her of “torturing” an “innocent” man — all while claiming to be nothing but an “art project.”

Johnson had previously stated he was soliciting donations for an “art project” of his own, said he had something big planned for Sulkowicz’s graduation, and was among the first people to follow the @fakerape Twitter account. Johnson has denied any connection to the stunt, dismissing evidence of his involvement as a bizarre set of coincidences.

The good news? The @fakerape Twitter account has been suspended as well. Its photos of the posters were removed from the image-hosting website Flickr a few days ago, leading @fakerape to host them on Imgur. Which, as of this morning, has also removed its photos, most likely for violating its terms of service. Links to its old photo album appear to turn up a 404 Error page.

The Daily Caller’s Jim Treacher — a noted supporter of the now-defunct @fakerape account — Tweeted that the “[Social Justice Warrior] fascists win again.” One user replied to Treacher by saying, “Looks to me like only one side of these debates must toe the line to remain online.”

To make things even more amusing, the torn-down “Pretty Little Liar” posters defaming Sulkowicz and Dunham have been replaced by these: 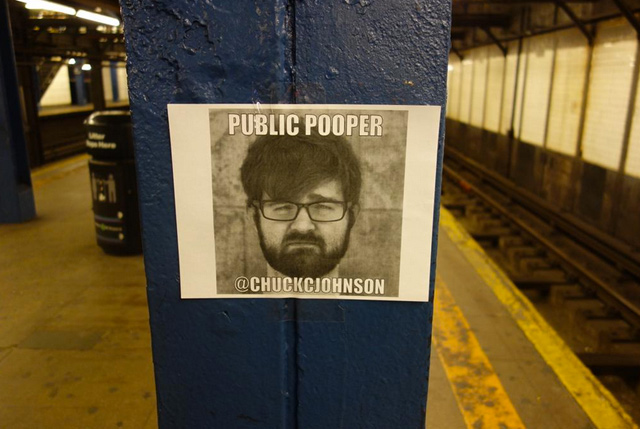 This is an obvious reference to the rumor that Johnson, while a student at Claremont McKenna College, defecated on a dormitory floor. All I can say is, good job Internet. Especially to the members of the shadowy Social Justice Warrior organization which controls the mainstream media.